Electronic Grade Hydrogen Peroxide Market By Primary Function (Etchant, Oxidizing & Cleaning Agent), By Concentration (30% -32%, Above 32%), By Contamination Level, By Application, By Region - Forecast to 2022 to 2032

Wet chemicals find enormous opportunities across numerous processes including cleaning, etching, and others. Hydrogen peroxide proves to be the most promising cleaning agent among all wet chemicals.

In the electronics sector, hydrogen peroxide is a chemical that is frequently used for cleaning and etching purposes. Other notable uses include the production of flat panel displays and semiconductor wafer cleaning.

The consistent need for efficient and high-speed processing with reduced size has increased the number of process steps in the chemical mechanical planarization process to offer high polished semiconductor wafer surface. Due to its impressive cleaning properties offered by hydrogen peroxide has emerged as a choice of cleaning agent among semiconductor manufacturers.

The Internet of Things (IoT) revolution has increased the number of semiconductor chips and equipment. The introduction of IoT in semiconductors goes hand in hand with an exponential increase in the number of chips, giving the spotlight to novel chip manufacturing materials. Thus, the demand for hydrogen peroxide is also expected to gain momentum for cleaning purposes.

According to the Fact.MR, a market research and competitive intelligence provider, the market is projected to exhibit growth at a 4.6% CAGR between 2022 and 2032. 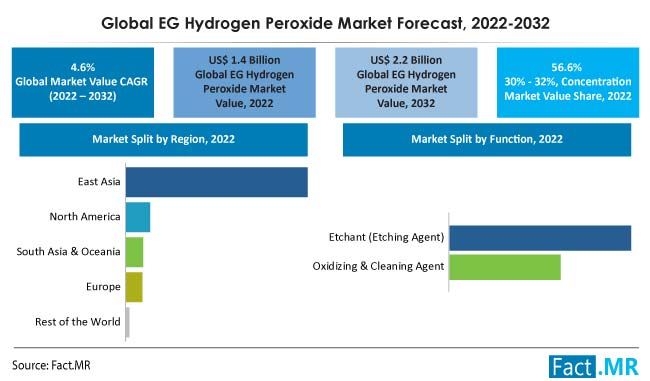 Market share analysis of electronic grade hydrogen peroxide based on application and region is provided in a nutshell in the above image. Under the application segment, the etching sub-segment dominates with a 62.1% market share in 2022.

Manufacturers are concentrating on increasing their market share and presence in the highly competitive electronics industry by providing cutting-edge products in a shorter time frame, at a lower cost, with better product quality and higher performance.

Electronic manufacturers, especially those from European nations, are investing in Eastern production clusters to meet the market's growing need for smaller, thinner, and cost-effective electronic gadgets. Nowadays, wireless communications are evolving as the driving force behind convergence. Digital convergence has been posing significant design challenges to system manufacturers.

Moreover, the growing demand for the miniaturization of electronic components into a printed circuit board at low cost develops the relocation of their labor-intensive manufacturing facilities to the Asia Pacific. Thus, East Asia has become a strategic location for global electronics devices vis-à-vis consumption of electronic-grade chemicals including hydrogen peroxide.

The need for IC (integrated circuit) process chemicals has been driven by growing silicon wafer surface area and fab capacity, and new developing technologies are expected to keep this trend going. The number of steps in the manufacturing process and the demand for etching and cleaning solutions have increased as a result of the complexity of semiconductors.

Wet processing is necessary for the semiconductor manufacturing process for the effective cleaning of small geometries and tools. EGHP, hydrogen fluoride, sulphuric acid, nitric acid, ultrapure water, and other wet chemicals are the main chemicals that match the purity level required by semiconductor makers. Additionally, as devices and systems become more connected, demand for sensors, actuators, microcontrollers, and other semiconductor devices is expected to rise.

The desire for high levels of product purity from improved and future technologies will increase the use of wet process chemicals over the forecast period.

“Noxious Effect of Hydrogen Peroxide Products to Obstruct the Growth”

Asphyxiation in poorly ventilated regions can be caused by inhaling concentrated hydrogen peroxide in the form of vapors, mists, or aerosols. Additionally, for the majority of fundamental materials, such as copper alloys or heavy metals, it speeds up thermal breakdown on its own. It should therefore be handled and maintained correctly to avoid any possible health hazards.

The chemical can be damaging to the skin, eyes, and respiratory system due to its potent oxidizing properties. Long-term exposure might cause hair whitening and skin and eye discomfort. To prevent health risks, they should be handled and stored carefully.

Why does China stand out as one of the Prominent Destinations for EGHP manufacturers?

China still tops the ladder in terms of its consumption and is poised to have a market share of 31.8% in 2022.

What is the Current Scenario of the Market in the US?

The US has been identified as promising consumers of hydrogen peroxide. This is mainly attributed to the multibillion-dollar integrated chip and semiconductor industry that exist in the country. The US is anticipated to increase its share of the fabrication capacity of semiconductors owing to the support of the country’s government funding under the CHIPS for America Act.

Growing demand for semiconductor wafer cleaning, printed circuit board etching, photovoltaic manufacturing, and flat panel display is the reason behind the increasing requirement for the market in the US.

Which Application is Triggering the EGHP Requirement?

It is extensively used in the etching of printed circuit boards as it acts as a strong oxidizer allowing the acid to eat away the copper. The growth of new energy vehicles directly boosts demand for automotive printed circuit boards (PCB), owing to consumers demanding safer, more comfortable, intelligent automobiles, resulting in vehicles being modified to be electrified and digitalized.

Advanced driver-assistance systems need many PCB-based components such as sensors, controllers, and safety systems, thus spurring the demand for the market.

Globally, the Printed Circuit Boards (PCB) industry is the primary consumer of the market. Growing electrical and electronics demand has been identified as the major driver for chemical consumption in the application.

How is EGHP as an Etching Agent Increasing the Sales?

Its consumption as an etchant (etching agent) is projected to account for a major share of the market. This is mainly attributed to the effectiveness of chemicals being mainly used as semiconductor silicon wafer cleaning agents.

Additionally, hydrogen peroxide as an etching agent has been extensively used for the treatment of copper alloys, gallium, and germanium in the electronic industry, which has infused its use case over the years.

The continuous evolution of electronic components across a wide umbrella of industries creates a likely atmosphere for PCB manufacturing. This creates wide opportunities for hydrogen peroxide to be used for etching purposes.

Attributed to these mentioned factors electronic-grade hydrogen peroxide as an etching agent will grow significantly.

Market players are targeting higher purity levels of hydrogen peroxide along with investments in novel technologies and capacity expansions. Setting up facilities across the major semiconductor markets remains the top strategy for market leaders in the market. Burgeoning demand for the market has pushed manufacturers to increase their production capacities.

Worldwide demand is anticipated to reach US$ 2.2 billion by 2032-end.