The computer-aided dispatch market is expected to close in on revenues worth over US$ 5.95 Bn in 2032, expanding at a CAGR of 11.2% according to recent research of Fact.MR.

As per Fact.MR’s recent analysis report, the demand for CAD technology witnessed stellar growth in the past half-decade, registering a staggering 10% value CAGR from 2017 to 2022. Computer-aided dispatch solutions are profoundly used by public safety departments or agencies where dispatch and unit position monitoring are critical.

Increase in cybercrime, natural disasters and national public safety initiatives and updated policies and regulations, and the advent of connected devices are driving the market for computer aided dispatch. Prospects further heightened during the COVID-19 pandemic, with organizations leveraging computer aided dispatch systems to monitor employees’ progress in remote working arrangements, and healthcare providers using them to supervise patients and staff alike to prevent spread of the infection.

Future market demand is expected to surge even further, as several enterprises shift to the virtual landscape. This will necessitate increased deployment of safety monitoring software, along with advanced computer aided analytical tools. The market valuation is estimated to exceed a mark of nearly US$ 6 Bn through 2032, following CAGR of 11.2% during the futuristic outlook.

What are the Factors Driving the Demand for Computer Aided Dispatch Software?

Extensive Reliance on the Internet of Things (IoT) Augmenting Adoption

The computer-aided dispatch solutions continue to gain ground in public transport, safety, reporting, and emergencies services verticals. As network speeds increase and become more economical, computer aided dispatch (CAD) technology will expand, and systems will have the ability to share rich data including images and videos, with first responders enroute to an incident to provide information for enhanced situational.

The development of the IoT continues to provide a strong infrastructure required for the growth of the computer aided dispatch market. Snowballing connectivity between objects has empowered effective detection, monitoring and management of resources and human life.

Additionally, advances in IoT coupled with advancements in wearable technology is likely to boost CAD developments, with these combined systems allowing operators to precisely locate people, and allowing consumers to use features such as text to voice to contact public safety agencies. The technology can automatically contact agencies in case the person wearing it under distress.

For example, Apple recently announced a new walkie-talkie feature for the Apple Watch, which is available with the newest software update. While still in its early stages of development, the idea of walkie-talkies on wearable technology may have been used outside of a consumer market. The benefits offered by the modern computer-aided dispatch systems enable emergency services to respond quickly and efficiently, which can potentially bring down the number of lives lost on account of preventable deaths.

Administrative authorities are already shifting toward more integrated, enhanced CAD solutions in emergency services, with the US National Emergency Number Association announcing the NextGen 911 plan which proposes the enhancement of the current computer-aided dispatch services across the country by 2023.

Why North America Remains at the Forefront of Computer-Aided Dispatch?

The U.S. Department of Homeland Security (DHS) established the System Assessment and Validation for Emergency Responders (SAVER) Program to assist emergency responders in making procurement decisions. Furthermore, the expanding national public safety initiatives and the modern policies and regulations towards adopting the solutions is driving the global Computer-Aided Dispatch market in the region.

Additionally, a rise in criminal activities and the natural disasters strains for efficient public safety and dispatch solutions is driving the growth of the dispatch market. According to Fact.MR, CAD demand in North America is likely to surge at a CAGR of 9% from 2022-2032.

Along with this, the CAD systems have now become an interoperable, nimble platform that works to simplify communications between 911 and first responders. Next-generation 911 has propelled the demand for CAD systems in recent years.

How Opportunistic are Growth Prospects in Asia for Computer Aided Dispatch Software?

Asia is projected to depict a higher growth rate owing to an upsurge in investments in public safety & infrastructure progress through the forecast period. The global computer-aided dispatch market was evaluated nearly at US$ 1.52 Bn in 2021, and is anticipated to cultivate with a healthy CAGR of around 10% through 2032.

The participation of the government is critical for investments in the market. The CAD market is undergoing technical advancements with Geographic Information System (GIS) and Closed-Circuit Television (CCTV) integration.

The emphasis on smart cities and improved transportation systems has amplified the usage of CAD systems, which help in public safety and ensure timely dispatch of units to several sectors. Amongst all countries, India, Hong Kong, Malaysia, Singapore, China, Vietnam, and Australia are good prospects for the CAD market. 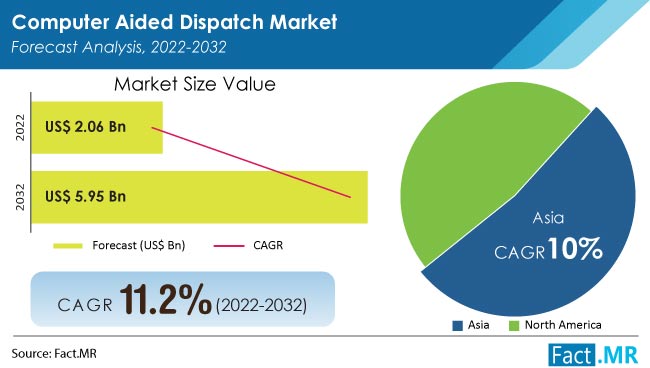 The study opines widespread implementation of computer-aided dispatch systems in governmental administrations to reinforce market growth, with revenues assessed at nearly US$ 600 Mn for 2022.

Fact.MR summarizes that demand for cloud-based CAD systems will expand significantly in the coming years. The competition in the logistics and e-commerce sectors is escalating, as corporations shift their emphasis toward restructuring their dispatch solutions and call centres, to expand their customer base. As public safety personnel respond to increasingly complex events, they require technology with the ability to support their efforts.

How much is the computer aided dispatch market worth?

As of 2022, sales of computer-aided dispatch systems and software are estimated to reach nearly US$ 2.06 Bn.

What was the last 5 years CAGR for the computer aided dispatch market?

What are the future growth projections for Computer Aided Dispatch demand?

Which is the most lucrative opportunity expected to fuel future sales?

What is the Growth Outlook for the North American computer aided dispatch industry?

Which players operate in the market for computer aided dispatch?

Which is the fastest-growing segment in Computer Aided Dispatch?

The Cloud segment of deployment type is the fastest-growing segment in the market.

Integrated Workplace Management System (IWMS) Market is expected to reach a value of nearly US$ 9.2 ...

The global multi-cloud management market is expected to reach US$ 9 Bn. Furthermore, the market is p...

Cloud-based Payroll Software Market is projected to grow at a CAGR of 10%, and is likely reach a val...