Global demand for total stations accounts for a market value of US$ 2.3 billion in 2023 and is projected to increase at 6.3% CAGR over the next ten years. By the end of 2033, the global total station market is anticipated to reach a valuation of US$ 4.25 billion.

A total station is a device that is capable of measuring vertical and horizontal angles, elevations, and distances in topographic applications. This type of surveying equipment is extensively used in design surveys, mining surveys, forensic investigations, infrastructure surveys, etc. Total station theodolite (TST) is preferred over other land surveying equipment owing to its versatility and several advantages that make it a suitable choice for various applications.

Some of the advantages associated with the use of total stations are:

An increasing number of new construction projects being launched to support infrastructure development activity across the world are expected to boost shipments of total station machines over the coming years. Increasing urbanization, growing world population, modernization of the construction industry, growing demand for efficiency and accuracy in surveying, and increasing scope of application of total stations in several industry verticals are other aspects that could potentially uplift sales of electronic total stations throughout the forecast period.

On the contrary, the high costs of total station devices and the availability of other construction equipment are anticipated to have a restraining effect on overall market development going forward. Moreover, the lack of skilled professionals to operate these advanced total station machines is also expected to hamper total station sales over the next ten years.

A more detailed account of all drivers, challenges, restraints, and opportunities that govern market development at present and across the forecast period has been listed in this revised total station market research analysis by Fact.MR, a market research and competitive intelligence provider. 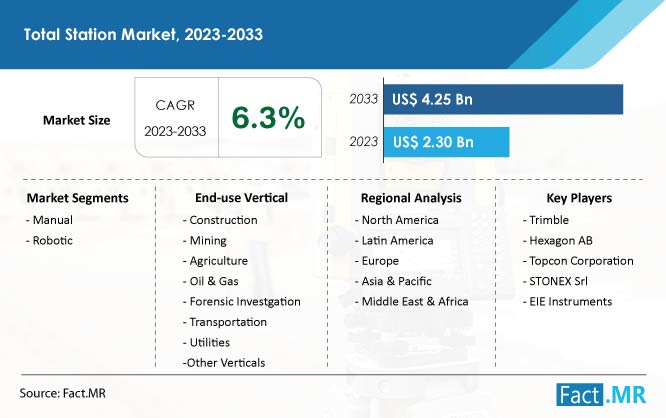 “Asia Pacific to Account for Substantial Demand for Total Stations”

Infrastructure development has become a prime focus for emerging economies in the APAC region and this is a key prospect that is predicted to promulgate total station sales in the future. Growing urbanization and industrialization, increasing population, supportive government initiatives for infrastructure development, rising investments in the construction sector, and growing focus on rural area development are some other factors that could potentially uplift shipments of total stations over the coming years.

Development of smart city projects in countries such as India and China is expected to open up new avenues of opportunities for established as well as new total station companies across the forecast period. Also, China and India are estimated to be the most lucrative markets in this region over the next ten years through 2033.

How are Total Station Companies Faring in North America?

Rapid adoption of advanced technologies in Canada and the United States is expected to bolster demand for total stations and create a highly attractive growth scope for total station manufacturers in the North American region.

Increasing use of total station devices in the transportation industry, a growing number of construction projects, increasing population, and high availability of advanced surveying equipment are other factors that are predicted to uplift total station shipments in these North American countries throughout the forecast period.

How Will Total Station Sales Fare in Japan?

In the past decade, reconstruction activity in Japan has surged at a notable pace owing to the organization of the Tokyo Olympics and the Great East Japan Earthquake. Japan has a highly lucrative construction sector which has a notable contribution to the gross domestic product (GDP) of the country and hence this prospect makes it a highly remunerative market for total station instruments.

Advancements in the construction industry and growing investments in the modernization of infrastructure are other factors that are anticipated to boost sales of electronic total stations in the country through 2033. Moreover, increasing spending on construction research and development is also projected to potentially boost market evolution trends over the next ten years.

Will Investing in European Countries Be Profitable for Total Station Vendors?

“Increasing Use of Total Station Machines in Agriculture Sector”

Farmers in Europe are adopting advanced technologies and instruments to optimize agricultural output and this trend is expected to primarily influence total station sales in the region over the coming years. Electronic total stations are used to measure the farmland and optimize the deployment of machinery for the complete land to increase productivity and lower costs.

Increasing investments by the government to boost housing infrastructure, growing demand for renovation and modernization of old buildings, and growing demand for housing in rural areas are other factors that are slated to bolster total station shipments in European countries going forward.

What Type of Total Stations are Preferred?

Based on product type, the market for total stations is segmented into manual and robotic.

Integration of advanced technologies such as artificial intelligence and machine learning in robotic total station machines is also projected to open up new opportunities for total station manufacturers going forward.

Global demand for total stations accounts for a market valuation of US$ 2.3 billion.

Product type, voltage rating, end-use vertical, and region are the prime segments profiled in this report.

Asia Pacific is anticipated to lead the global total station market throughout the forecast period.

*57 figures and 69 tables includes by FactMR