The global syngas catalyst market production is expected to be 67.1 KT by the end of 2021. In 2020, a decline of 1.5% in market value for syngas catalysts was observed, not meeting the expectations what most producers had anticipated.

According to the latest report published by Fact.MR, a market research and competitive intelligence provider, in the past half-decade, the syngas catalysts market expanded at a CAGR of around 4.4%, which can be attributed to rising demand for syngas in regions such as East Asia, South Asia & Oceania, and MEA.

Further, mounting production of ammonia synthesis of SNG and methanol synthesis of SNG is set to drive demand for syngas catalysts at a steady CAGR of around 5.6% over the projected forecast period of 2021 to 2031.

Over the past decade, rise in sale of syngas has mainly been driven by the ammonia industry that uses catalysts for synthesis purpose. For instance, 33.3 KT of the total syngas catalyst produced globally was used for ammonia synthesis in 2020. Additionally, the use case in further projected to increase its market share by around 60 BPS through 2031.

Moreover, as per Fact.MR’s estimation, the syngas catalysts industry is projected to see a surge in value by 1.7X to around US$ 1.3 Bn by the end of 2031. Estimations have been put in place seeing investments pouring in for methanol and hydrogen capacity expansion along with constant demand from the ammonia industry.

Also, it is seen that demand for syngas catalysts in remote power applications has been swelling to fulfil demand.

COVID-19 too had an impact on syngas catalyst revenue with a dip in its Y-O-Y growth, but constant demand for urea to be used as a fertilizer ensured continued supply of catalysts, as such helping in stabilizing the market.

Additionally, hydrogen has been identified as a potent alternate energy source that is gaining traction around the globe. Copper-zinc oxide syngas catalysts also remained a backbone for the demand with increased usage.

Owing to these factors, the petroleum syngas catalysts market for hydrogen synthesis use case is projected to hold 19.5% of global revenue share by 2031. Also, attributed to the above positive trends, Fact.MR estimates the market for syngas catalysts to expand at a CAGR of 5.6% over the forecast period 2021-2031.

What Properties Do Syngas Catalysts Shows That make Them Fit for Varied Use Cases?

Syngas catalysts are used for varied use cases such as ammonia synthesis, methanol synthesis, hydrogen synthesis, gas to liquid syngas catalyst production, gasification, and many more. Owing to catalysts use in the above-mentioned use cases, they come equipped with high activity, low pressure drop properties, varied shapes, along with ability to retain these properties even in low temperatures.

Moreover, syngas catalysts that can withstand different operations such as reforming, steam reforming, and partial oxidation processes are high in demand.

Attributed to above-mentioned properties, growth of the global syngas catalyst market is projected to be moderate and garner an absolute $ opportunity of worth US$ 560 Mn by the end of the forecast period.

What Obstructions are Projected that May Hinder Sales of Syngas Catalysts?

Chemical and petrochemical industries are under constant scrutiny by government organizations owing to their contribution to carbon emissions. For instance, according to a latest report by IEA, production of syngas catalyst hydrogen emits around 830 Mn tons of CO2 annually. Thus, governments around the world are actively proposing to regulate these industries.

Regulations would have a direct impact on the sale of syngas catalysts as stringent laws demand for sustainable sourcing, which is tough to adopt at initial stages.

Moreover, natural gas is seeing a surge in consumption from the transportation sector owing to its clean combustion properties. This could lead to shortage and increase the prices of natural gas for the bio-syngas market. Increased production cost would mean procurement of catalysts at lower rates, thus threatening the syngas & derivatives market revenue generation capacity.

The above-mentioned factor may lead to a decrease in market size of syngas catalysts from petrochemical industries, and thus act as hindrance to its growth over the forecast period.

Which Region Provides Syngas Catalyst Manufacturers the Opportunity to Expand their Footprint?

Additionally, rising interest in alternate fuels such as methanol has propelled demand for SNG as a syngas catalyst, thus enabling manufacturers to penetrate the market targeting end-use industries more effectively.

Owing to the above-mentioned factors, syngas catalyst outlook in East Asia is poised to remain positive whilst holding a major share in terms of revenue. Further the Argentina coal to liquid syngas catalyst market over the years has provided stupendous growth opportunity and is projected to continue on the same path for the next ten years. 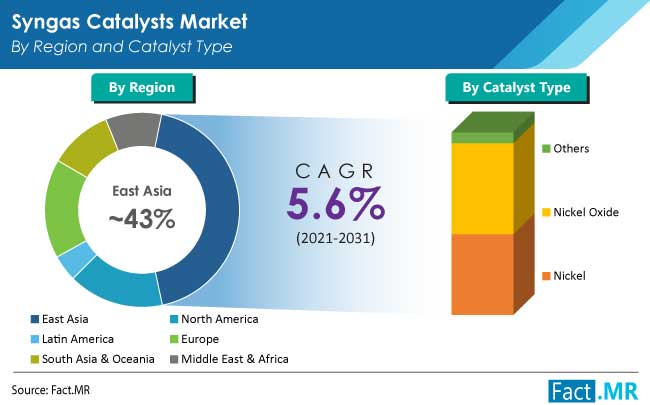 What Role Does China Play in Uplifting the Demand for Syngas Catalysts?

China has been at the forefront of various chemical businesses in terms of both, production and consumption. Also, by late 2010, there has been a rise in interest for olefins production from methanol in China, enabling high adoption of MTO (methanol to olefins) processes.

Since olefins are important feedstock for the production of ethylene and propylene, its demand is projected to keep rising in the country. For instance, ethylene demand reached around 27 Mn tons in 2020.

Attributed to these factors and as per Fact.MR analysis, China will continue to play a major role in uplifting the demand for methanol synthesis of SNG catalysts over the forecast period of 2021-2031.

How Has Demand for Syngas Catalysts Been Shaping Up across Established and Evolving Markets?

Japan: Japan is poised to be the second-most lucrative market in East Asia after China, owing to high consumption of syngas for hydrogen production and power generation.

Moreover, Japan is determined to become a hydrogen superpower in next ten years, which would enable rapid syngas production, thus propelling demand for syngas catalysts in the country. The market in Japan is projected to expand at a CAGR of 4.8% over the period.

India: Importance of syngas catalysts and its demand in India will mainly be driven by ammonia production, which is widely used in fertilizers. Moreover, several initiatives over the years have been proposed by the government, such establishment of methanol plants that has set out positive trends for catalyst producers.

Owing to these factors, the Indian market is set to lead in terms of consumption in the South Asia and Oceania region.

Brazil: Brazil is projected to hold major share among other Latin American countries. This is mainly attributed to a well-established methanol industry in the country, along with rising trend of clean fuel production.

Also, methanol blending with conventional fuels has a prominent place in Brazil’s automotive sector. For instance, around 90% cars in Brazil uses flex fuel. Owing to these positive trends, Brazil is set to provide robust growth in syngas catalyst demand.

U.S.: The U.S. has a well-established petrochemical and oil & gas industry, which constantly need syngas for the production of hydrogen and other chemicals. Moreover, leading producers of syngas catalysts also have their production bases in the U.S., which provides local ammonia and methanol producers with easy access to catalysts.

Thus, the U.S. is projected to provide a major boost in demand for syngas catalysts over the coming years.

Why are GCC Countries Being Seen as Lucrative Markets for Syngas Catalysts?

The GCC region includes countries such as Saudi Arabia, Qatar, UAE, Bahrain, Oman, and Kuwait. These countries have a well-established petrochemical industry, which includes renowned companies such as SABIC and Saudi Aramco.

Moreover, increased production of petrochemicals has been seen in the region over the past decade, which has provided a positive outlook to catalyst manufacturers. Major use case in GCC countries is projected to be that for the hydrogen synthesis of SNG, thus propelling the catalyst market in the region.

Attributed to these factors, GCC countries are set to provide an absolute $ opportunity of worth US$ 31 Mn through 2031.

Which Operation Type is Set to Drive Demand for Syngas Catalysts?

Reforming operations for syngas production is set to dominate operations globally. This is mainly attributed to the flexibility of operation for varied use cases such as ammonia synthesis, methanol synthesis, hydrogen synthesis, and many more.

Moreover, efficiency of the reforming process when compared to the partial oxidation method is high, and is thus is preferred by industries for syngas production.

Owing to these factors the syngas catalyst hole cylinder market for reforming operations is set to dominate by holding around 61% share among other operations.

Also, steam reforming is poised to be the second-most lucrative operation type and is likely to touch the US$ 300 Mn mark by 2031. Moreover, operations are also projected to dominate the Germany syngas & derivatives market along with the Italy bio-syngas market in the forecast period.

For Which Use Case Will Syngas Catalysts Garner Highest Demand?

Holding around 49% revenue share in 2020, ammonia synthesis is poised to dominate in terms of use case. This is mainly attributed to high demand for catalysts for ammonia production from countries such as China and India.

Ammonia is mainly used for fertilizer production, demand for which is high form these two agricultural countries. Around 41% of global ammonia production happens in China and India, which calls for constant supply of catalyst for syngas production. This has opened an opportunity for the natural syngas catalysts market in the region.

Owing to these positive trends, ammonia synthesis use case is set to provide an absolute $ opportunity worth US$ 300 Mn over the next decade. Meanwhile, increased use cases will also drive consumption till 55 KT by 2031-end.

Further use of syngas for fuel cell application is also poised to provide high incremental $ opportunity in the market.

How Has COVID-19 Impacted Revenue Generation from Syngas Catalysts?

Y-O-Y revenue growth for syngas catalysts in 2020 contracted by around 1.4% when compared to 2019. Contraction was mainly attributed to fall in production due to lockdowns and shutdown of manufacturing units.

However, constant demand for fertilizers ensured that the market for syngas catalyst stabilized. With manufacturing units now working full capacity, demand is set to go back to pre-pandemic levels.

In order to expand their consumer base, syngas catalyst manufacturers are opting for both, organic and inorganic growth strategies such as capacity expansion, partnerships, and collaboration to help them garner more market share. 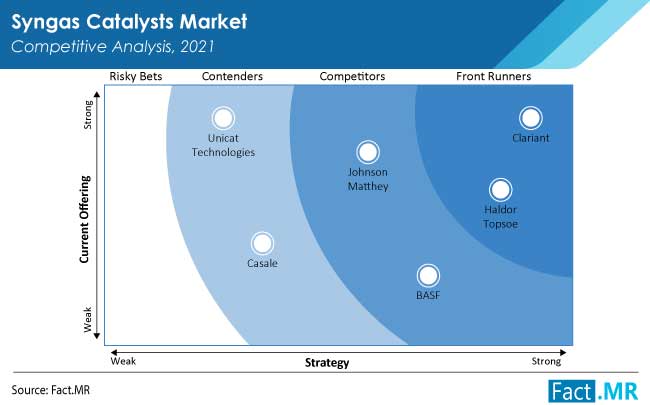 Currently, the global syngas catalysts market is worth more than US$ 800 Mn.

Mounting methanol production along with propelling ammonia industry has been identified as key trends bolstering demand for syngas catalysts.

Market players are opting for collaborations and partnerships with regional suppliers and manufacturers to establish their footprint in high-growth regions.

China, Japan, the U.S., India, and GCC countries are driving most of the demand for syngas catalysts.

China, the U.S., and Denmark are major syngas catalyst producers.

The U.S. syngas catalyst market is projected to progress at a CAGR of around 4.8% over next ten years.

*182 figures and 56 tables includes by FactMR