Urology is the branch of medicine that deals with the diseases associated with the male & female urinary tract and male reproductive system. These diseases include bladder control problems, kidney stones, urinary tract infections, prostate problems, cancer, and others.

Urology devices are utilized in the diagnosis and surgical treatment of these diseases and hence the field is also known as genitourinary surgery. Some of the urology diagnostic devices are cystoscopy, ureteroscopy, urodynamic testing, dialysis device, endoscopes, laser & lithotripsy devices and endovision system.

However, as per the recently published Fact.MR’s report, the global urology devices industry is anticipated to gain 98 BPS by over the assessment years 2022 & 2032. It accounts for closely 7.8% market share in the global surgical and medical market which is expected to witness 6.3% CAGR growth during the forecast years.

Global statistics of the rising geriatric population is also alarming which in turn will add numbers of age-associated chronic diseases. Urologic diseases are proposed to rise from the urinary system itself, or it could be secondary to an illness of another underlying disease. There is a dramatic increase in the secondary urologic disease incidence associated with the increasing chronic disease incidences such as diabetes.

Owing to the above-mentioned factors, the demand for urology devices has been augmented severely in the previous few years. The urology market has touched at the valuation of closely USD 11.2 billion in 2021 at a 3.6% CAGR growth.

Besides, according to historical trend analysis, Fact.MR predicts that the global urology devices market is expected to observe 6.3% CAGR growth and cross the valuation of USD 21.7 billion throughout the assessment years.

Further, many developing countries have a dearth of data for the diagnosed prostate cancer and some specific countries, notably in Asia, report higher levels of mortality due to low screening and delayed diagnosis. Also, the treatment of cancer is dependent on the diagnosed stages of prostate cancer.

According to the American Cancer Society, most doctors believe that surgery, external radiation and brachytherapy, all have similar care rates if detected at an earlier stage. With the availability of multiple treatment options and surgical urology devices, the growing prevalence of prostate cancer is complementing the demand for urology devices.

Although the treatment of prostate cancer depends on the diagnosed stage, a particular diagnosis has multiple options of treatment. Urolithiasis or kidney stones are majorly treated with endoscopy, cystoscopy, lasers and lithotripsy devices. The urodynamic system is mostly utilized for the treatment of bladder leakage problems.

In the case of prostate cancer, surgical removal, brachytherapy and radiation therapy are the most utilized treatments. The treatment selection becomes complicated with the development of new innovations of robotic-assisted prostatectomy and proton beam radiation therapy.

Although these treatments seem promising, their newness poses a dearth of knowledge in terms of long-term success, reliability and possible side effects. These reasons are creating significant hurdles in the quick adoption of advanced urology devices by medical practitioners and patients.

With the rapidly transforming world, there is a growing preference of minimally invasive surgical treatments that involves one or more small incisions, quicker recovery times, and less discomfort as opposed to conventional surgery. Innovations of minimally invasive treatment designs to treat prostate cancer has evolved dramatically.

One such example is of High-Intensity Focused Ultrasound (HIFU) in which high-intensity ultrasound waves are used to destroy only cancer cells while protecting the surrounding healthy tissue. This treatment has better visibility and control while surgery and has significantly reduced recovery time. Another example is of Urolift system for the treatment of benign prostate hyperplasia (BPH). This is also a minimally invasive treatment without a catheter which allows patients to return home on the same day. 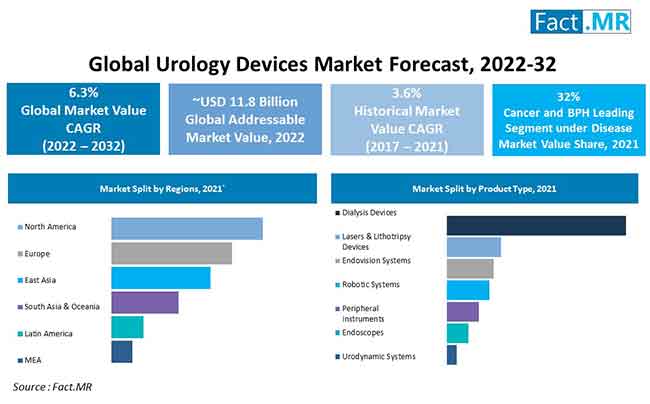 Research and development in robotics and automation have brought cutting edge precision and miniaturization in the realm of surgery and the applications are oriented for the extensive use of minimally invasive surgery.

The trend of robotics and automation in urology devices are likely to attract public and private funding for R&D. Moreover, FDA approvals of recent robotic surgical treatments are encouraging the utilization of urology devices.

For instance, FDA recently approved the robotic surgical system of intuitive surgical which has a synchronized motion table. The system enables surgeons to perform real-time patient positioning needed for retraction. Such approvals will encourage several other robotic innovations in the pipeline.

What is the Growth Scenario of The United States Markets?

Further, The United States is also experiencing an increasing number of hospitalization for the diagnosis and treatment of end-stage renal disease (ESRD) and acute kidney injury (AKI).  Also, about 9.4% of the U.S. population, 30.3 million people have diabetes which in turn is adding the numbers in the incidences of diabetic kidney diseases.

Urologic disease diagnosis and treatment scenario in the United States is complemented by the global leading manufacturers of urology devices including Boston Scientific, Baxter, CR Bard, Intuitive Surgical and many more. Thus, the region is expected to attract a massive demand and supply of urology devices in the foreseeable future.

What are the Growth Prospect of East Asian Urology Devices Market?

The development of Kidney stones of Urolithiasis is attributed to dietary and lifestyle changes, quality of drinking water and some environmental factors. Asia has divergent climates and cultures that make the characteristic prevalence and incidences of kidney stones.

Further, the development of renal stones has been observed to be associated with systemic diseases such as type 2 diabetes mellitus, obesity, dyslipidaemia, and hypertension. Asian countries, notably India and Southeast Asian countries, have been facing the diabetes epidemic especially type 2 diabetes which in turn is adding in the incidences of renal stone diagnosis. The contribution of lifestyle and environmental factors for the development of urologic diseases has been increasing due to growing urbanization in the region.

Moreover, prostate cancer prevalence is expected to rise dramatically in Asia Pacific countries with the estimated count of about 0.2 million new cases and 80,000 deaths due to prostate cancer. However, South Asia and Oceania urology device market is expected to gain traction and grow at 7.7% CAGR and generate an absolute dollar opportunity of USD 1.3 billion by the end of 2032.

Which Product Type is projected to be the extensive contributor over the valuation period in Urology Devices Market?

The associated higher cost of new robotic surgical systems is restricting their penetration in the market. The existing robotic systems have an emerging competition of newly developing cost-effective robotic systems. There is an increasing development of strategies to design low-cost miniaturized robots. Moreover, the adoption of micro robots and nanorobots in urology surgical procedures is growing in the development of urology devices. Even though innovations are in pipeline, upcoming low-cost robotic systems are threatening the existing robotic system with high costs. However, the robotic systems segment is predicted to last its dominance in the forecast years at a CAGR of 18.1% CAGR and generate an absolute $ opportunity of about USD 1.6 Billion by the end of 2032.

Which Disease is poised to show lucrative growth in Urology Devices Market?

Owing to economic growth, changing diets, quality of drinking water and changing lifestyles have had an excessive impact on the overall women population health. The Asia Pacific has divergent climates and cultures that make the characteristic prevalence and incidences of kidney stones. For example, in China, the prevalence of urinary stones was estimated to be 7.54% of which 9.68% incidences were of population 60 years and older.

However, the kidney diseases segment is gaining traction in global market. Owing to this kidney diseases accounts for more than 2/5th of the market value share in the urology devices market. It is projected to deliver an absolute $ opportunity of roughly ~USD 4.4billion by the end of 2032.

Leading key players in the global urology devices market are coming up with innovative ideas to boost the growth of their products in the market. The majority of the players are targeting specific consumers with high demand to lead the market by having early entry is segments.

The global value of urology devices market is estimated to be worth over USD 11.8 Billion in 2022.

Which is the most leading region in the Urology Devices Market? North America tops the global urology devices market accounting for 1/3rd of global market share in 2022.