There has been a significant uptick in the consumption of convenient and packaged foods. Food manufacturers are increasingly using low-fat and low-calorie emulsifiers and co-emulsifiers in their products.

Moreover, dietary changes are being observed at an unprecedented level in many countries coupled with the introduction of new dietary guidelines by NGOs and health institutions.

Similar investments are expected to benefit the growth of natural emulsifiers and co-emulsifiers. On the back of these trends, the global emulsifiers & co-emulsifiers market is poised to expand positively at a CAGR of 6.7% during the forecast period (2020-2030).

The FDA ban on PHOs for food products usage has been effective from 2018 has created a favorable market for natural and plant based emulsifiers and co-emulsifiers obtained from palm oil, soy and sun flower.

Manufacturers like DuPont have already addressed changes by using sustainable source materials. Similar developments can be expected by lead competitors in the market. By product, lecithin is witnessing rampant adoption globally and is witnessing high adoption. 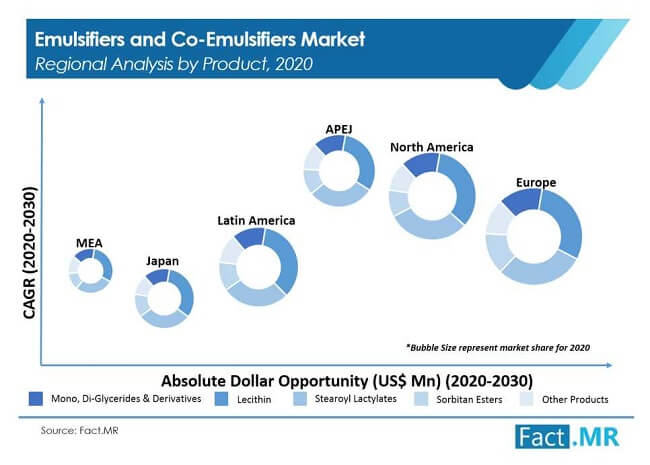 Severely affected regions such as North America & Europe are anticipated to lead within the market throughout the assessment period owing to high consumption of packaged & convenience food in the regions. Europe & North America together contributed around 65% of total revenue generation in 2019.

In long run, increasing demand for personal care products in Asia Pacific is driving the demand for lecithin. Lecithin, a naturally derived emulsifier, expected to grow twice of its current market value presenting an incremental opportunity of nearly US$ 1 Bn. 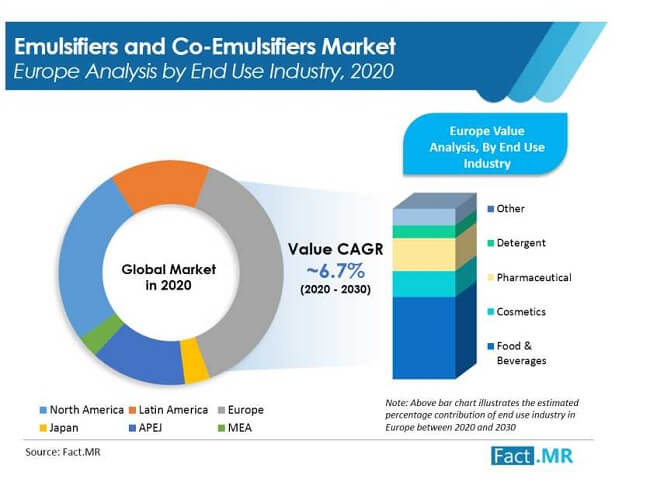 Covid-19 pandemic has adversely impacted the global food & beverage industry where national and regional lockdowns have disrupted both production and supply chain. It is possible that the effect on food & beverage manufacturers will be complex, affecting both demand and supply. And unlike other sectors, a change in consumer habits have led to increased demand for several categories of food products after the COVID pandemic.

Regional analysis in terms of supply chain analysis, business execution and market value analysis provides an in-depth perspective about the future scope of the global emulsifiers & co-emulsifiers market. In addition, a separate section on market structure has also been provided. The section provides a detailed analysis of key market players and the strategies for expansion in the emulsifiers market.

FactMR’s study has done the segmentation of emulsifiers & co-emulsifiers market on the basis of product type and end-use industry across the six key regions.

Study offers a comprehensive overview on diverse features that are inducing demand, revenue generation and sales in emulsifiers & co-emulsifiers market across the globe.

Predictions of emulsifiers & co-emulsifiers market, encompassing current as well as forthcoming projected values estimate and analysis on region-wise demand trends and price index have been assimilated in the report.

Country-specific valuation on demand for emulsifiers & co-emulsifiers has been offered for each regional market, along with the market scope estimate and forecast, price index, price point assessment, and impact analysis of dynamics of prominent regions and countries. For all regional markets Y-o-Y growth estimates have also been incorporated in the report.

The report ends with a section on the competition scenario of emulsifiers & co-emulsifiers market, along with the profiles of major companies contributing to the market expansion. Essential and up-to-date data as well as information correlated to the market performers, who principally engage in the production and supply of emulsifiers & co-emulsifiers, has been brought with the help of a detailed dashboard view. Market share analysis and comparison of prominent players provided in the report permits the report readers to plan preemptive steps to advance their businesses.