The global standard milk formula market is likely to witness steady growth, anticipated to reach US$ 28.2 Bn by 2031.

From 2016 to 2020, demand for standard milk formula grew at a CAGR of around 4%. Growth has been largely attributed to an increased reliance on infant formula as a convenient substitute to milk. Additionally, requirement of extra nutrients, especially across the developing world, has augmented popularity of standard milk formulae.

Future market demand is reliant on extensive emphasis on infant and prenatal care. As countries strive to improve child development and healthy growth, manufacturers are expanding their footprints across key geographies, leading to heightened sales of standard milk formula products. According to Fact.MR, the market is likely to surge at a CAGR of 5.2% from 2021-2031.

How is the Introduction of Probiotics Spurring Standard Milk Formula Demand?

Probiotics have been gaining significant traction in the wellness and nutrition sector across the globe. Probiotics, essentially live healthy bacteria, are being introduced in the infant formula space, on the back of their potential health benefits.

Moreover, favourable government initiatives, especially across emerging countries like China, India, have heightened the approval of infant formula. Consumers now conscious regarding the ingredients and label of content have compelled the companies to come up with clean-label manufacturing. Additionally, the advent of probiotics in infant milk formula have increased faith on these products especially of Gen Z and young parents, as they contain nutritional ingredients approved by Food & Drug Administration.

What are the Key Market Trends & Growth Opportunities in Standard Milk Formula Market?

Interest in mimicking the nutrition of breast milk continues to drive innovation in the infant nutrition category, with human milk oligosaccharides (HMOs) as the hero ingredient. Globally, new baby formula/milk launches with HMO ingredients grew more than tenfold between 2018 and 2019. With increased awareness of the role of HMOs in supporting immune system development, this trend is expected to continue.

Why Does the North America have a Prominent Hand in Driving the Standard Milk Formula Market?

North America is projected to govern the standard milk formula market, contributing nearly 47% throughout the forecast period. According to Fact.MR, there are more than 50 different baby formula available in U.S. Parents can chose among formulas made from conventional or organic milk or soy; they can also opt to try formulas labelled for fussy, gassy or colicky babies.

The Food and Drug Administration (FDA) dictates the nutrients and vitamins, and set the strict rules about how formula is produced, packaged, and labelled. Additionally, the American Academy of Paediatrics (AAP) suggests using cow's milk-based formulas, when possible, rather than soy-based formulas. Currently, Soy formulas accounts for about 40% of formula sales in the United States.

Multiple health organizations, including the World Health Organization, the American Academy of Paediatrics, endorse breastfeeding as the optimal form of nutrition for infants for the first year of life. However, the vast majority of infants in the United States are fed human milk substitutes by 6 months of age. This food source, although inferior to human milk in multiple respects, promotes more efficient growth, development, and nutrient balance than commercially available cow milk.

In terms of revenue, APAC region is the fastest leading market owing to augmented awareness offered by baby infant formula such as it facilitates healthy growth & development of babies, improves cognitive performance & development, prevents them from allergies, and enhances gastrointestinal health & immunity. The Asia-Pacific baby infant formula market size is estimated to reach the valuation of nearly US$ 26.2 Bn, following a CAGR of 9.2% over the forecast period.

This market growth is attributed to upsurge in number of working women, who majorly prefer infant milk for their babies, since breastfeeding is not always a feasible option for them. Moreover, many working women resume at work shortly after giving birth, which makes them opt for alternatives, such as infant milk, to feed their child in emerging countries like India & China. Considering the aforementioned factors, APAC region accounts for a significant share of nearly 33% in 2021 and is likely to escalate in upcoming future. 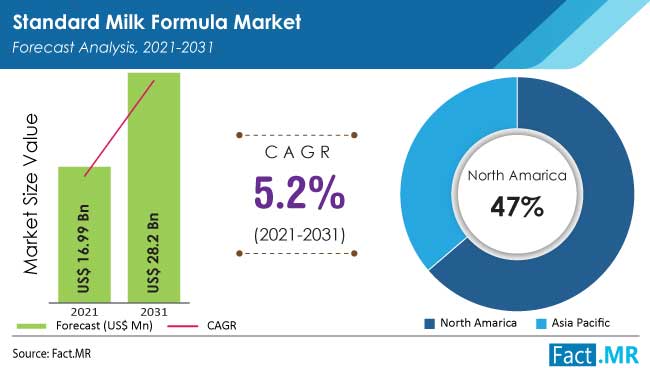 Which Type of Product is Highly Preferred in Standard Milk Formula Market?

The global demand for powder standard milk formula has substantially amplified over the years, due to upswing in awareness about the benefits offered by infant formula such as it is free from artificial hormones & toxic pesticides and is highly nutritious. Besides, prolonged shelf life of powder infant products, changes in socio-economic factors, and improvement in standard of living owing to significant increase in disposable income are the key factors that augment the growth of the baby infant formula market.

Moreover, the changing lifestyle of women professional has created a necessity for convenience baby products to cater the requirement of necessary nutrition for the infant and fulfil the needs of vitamins & minerals. Powdered standard milk formula serves the purpose with an easy to prepare formula for such parents for whom the breastfeeding isn’t a feasible option at the workplace.

Gerber- a key manufacturer claims that Good Start SoothePro has the “gentleness of breast milk” and helps with anything from excessive crying episodes to fussiness and gas. It contains just 30 percent lactose, which the brand says may ease baby’s stomach (though research into this is lacking). It also contains a blend of prebiotics and probiotics.

How much is the standard milk formula market worth?

As of 2021, the standard milk formula market is estimated to reach nearly US$ 17 Bn

What was the last 5 years CAGR for the standard milk formula market?

What are the future growth projections for standard milk formula market demand?

According to fact.MR, the standard milk formula industry is projected to grow at a CAGR of 5.2% until 2031

What factors drive the demand of the standard milk formula market?

The advent of probiotics in infant milk formula have increased faith on these products especially of Gen Z and young parents, as they contain nutritional ingredients approved by Food & Drug Administration.

What is the Growth Outlook for the Asia-Pacific standard milk formula industry?

The Asia Pacific market is projected to register a CAGR of 9.3% during the forecast period.

Which are some key manufacturers operating in the standard milk market?

Which is the fastest-growing segment in the Standard Milk Formula Market?

The organic standard milk formula segment is the fastest-growing segment in the market.

Cheese Crumbles Market is set to witness steady growth by 2028. The rising demand for convenience fo...

Konjac Market is expected to grow at a healthy CAGR throughout 2028. Rising demand for dietary suppl...