Expanded Polystyrene: A route to Reinventing the Construction Sector

The increasing inclination towards eco-friendly construction polymers have increased the demand of Expanded Polystyrene in the construction sector. Various studies suggest that greenhouse gas emissions from buildings might reach an alarming state in the near future, if proper measures are not taken. A report from the U.S. Green Building Council revealed that commercial and residential building sector accounts for more than one-third of the total carbon dioxide (CO2) emissions in the United States per year. Countries such as China and India are realizing the environmental implications of robust industrial development and urbanization. The above mentioned factors and government measures towards ecofriendly construction materials are anticipated to fuel the growth of global expanded polystyrene market. 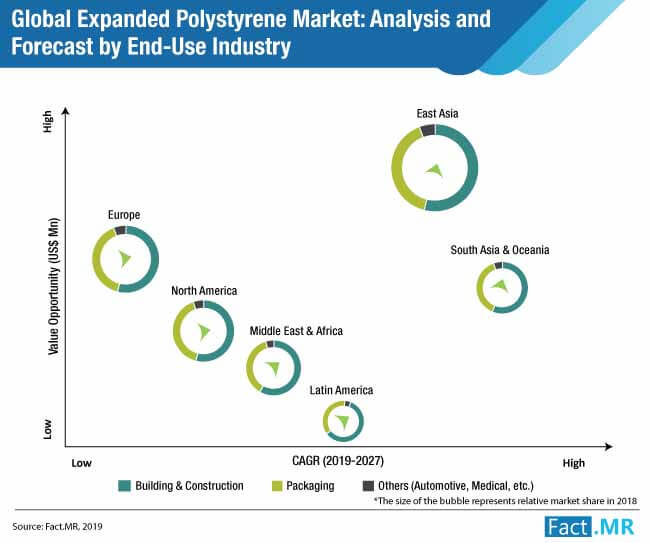 For all-inclusive insights on the global expanded polystyrene market, request sample of the report here.

Widespread Application in Food Packaging to Support the Growth of the Market.

Consumers are always on the move; this is majorly impacting the food consumption habit of consumers. Hence, companies are developing portable, easy-to-handle packages maintaining both quality and quantity of food products. This is escalating the growth of global Expanded Polystyrene market. Expanded Polystyrene is used in packaging of fish and shell fish, meat, fruits, ice cream and others. Consumers are seeking a quick and easy solution for food consumption, especially during lunchtime and breakfast. Hence, brands are focusing on offering nutritious meals in convenient food packaging. Offering convenience is becoming a priority for brands and manufacturers. The above factors will positively affect the demand of Expanded Polystyrene market.

In recent years, polymers have become extremely important as engineering materials. In terms of application, they are now successfully competing with other major classes of materials. Expanded Polymer has found renewed vigor in the construction industry. This is because Expanded Polystyrene come with capabilities such as low thermal conductivity, low weight, mechanical resistance, low water absorption, chemical resistance and others. Moreover, ease of handling and installation is anticipated to fuel the demand of Expanded Polystyrene in forecast period. 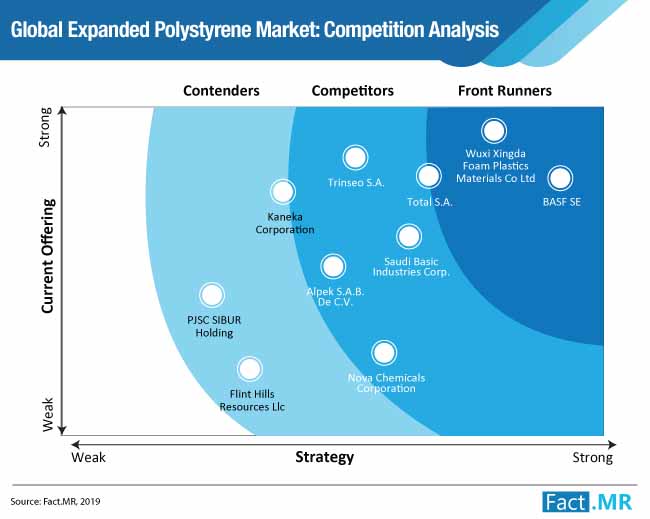 To know more about Fact.MR’s unique research methodology, request a sample of the report here.

The most prominent companies that are active in the global Expanded Polystyrene market are BASF SE, Total S.A., Alpek, S.A.B. De C.V., Trinseo SA, Wuxi Xingda New Foam Plastics Materials Co., Ltd., Synthos S.A. These companies resuming the marking of Expanded polystyrene and are able to guarantee a high level of reliability and quality consistency. The leading players are engaged in expanding the production capacity of Expanded Polystyrene and also performing R&D for enhancing the quality of products.

Request research methodology of this report.

The report also comprises the study of current issues with end users and opportunities for Expanded Polystyrene products. It also contains value chain analysis along with key market participants. In order to provide users of this report with a comprehensive view of the market, we have included detailed competitive analysis about market key players and strategic overviews. The dashboard provides a detailed comparison of Expanded Polystyrene manufacturers on parameters such as total revenue, product offerings and key strategy. A list of key companies operating in the Expanded Polystyrene market provided in the report adds to the credibility of this exhaustive research study.

The global Expanded Polystyrene market is segmented by product, end-use and region

Country-specific assessment on demand for the Expanded Polystyrene has been provided for each regional market, along with the market size valuation and forecast price point assessment, price index and impact analysis of key regional and country-wise dynamics, which were obtained through quotes from numerous Expanded Polystyrene manufacturers, experts and suppliers. Y-o-Y growth projections have also been offered on all regional markets incorporated in the report.

A number of primary and secondary sources were consulted during the course of the study. Secondary sources include Factiva, Morningstar and Hoovers, and company annual reports and publications. Comprehensive interviews have been conducted by our analysts, and the intelligence and insights obtained have been used for validating the information gained through secondary research. The report also includes a description of assumptions and acronyms utilized for research purposes. Data gathered have been validated using the triangulation method to offer useful quantitative and qualitative insights on the Expanded Polystyrene market.

A short market viewpoint offered in the report elucidates the macro-economic aspects that influences the growth of the Expanded Polystyrene market, which includes global GDP growth rate, various industries growth rate, such as construction industry and packaging industry among others. This report serves as an authentic resource of intelligence on the Expanded Polystyrene market, enabling the readers to take fact-based decisions on the future direction of their businesses.