The airline industry has not only adopted digital transformation but also invested in advanced technologies, which will drive the market for airport kiosk during the forecast period. There has been an increasing adoption of advanced technologies by the airport industry coupled with safety

measures and amongst these safety measures cyber security is on the rise. It is expected that spending on strengthening the customer and organizational privacy will gain massive momentum during the forecast period and give a boost to the market. Latest technological advancements such as self-serving technologies, digital travel advisor, and multiple entertainment options are being adopted by airport authorities around the globe.

It is anticipated that the adoption of such advanced technologies at the airport will continue to grow at a steady pace and indirectly drive the airport kiosk market during the forecast period.

In order to offer convenience to passengers, the worldwide airport authorities are concentrating on the adoption of self service solutions at the airport. Increasing installations of airport kiosks has reduced passenger delay. 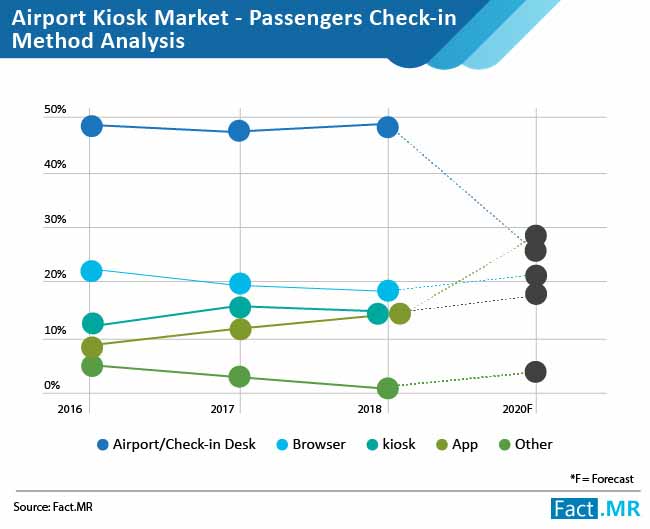 To oblige the growing air traffic and evolving expectations of consumers, worldwide airport authorities are focusing on incorporating IT solutions in their operations. By knowing the importance of IT solutions, the IT spending is being positively adopted by airport authorities across the globe, and it is highly expected that investments in the same will continue to grow during the assessment period.

The broader push towards IT spending is likely to increase the development and adoption of airport kiosk. In order to nullify the growing tourist footfalls, airport authorities in many Asian countries are set to massively invest in infrastructural upgrades. Beijing is working on developing a US$ 13 billion airports that is considered as one of world’s biggest aviation hubs.

Bangkok’s Suvarnabhumi and South Korea’s Incheon International Airport are also spending billions of dollars to boost airport infrastructure. Such activities are expected to provide a boost to the growth of the airport kiosk market during the forecast period.

Although the inclusion of technology is expected to speed up operations and offer excellent experiences to consumers at airport, the vulnerability of these systems to cyber-attacks is also anticipated to increase. In order to prevent a cyber-attack, airport authorities need to spend massively on safeguards.

Considering the sensitive nature of the industry to cyber terrorism, it is expected that regulations on the safe use of technology will become stringent during the forecast period and this will further boost the growth of the airport kiosk market. 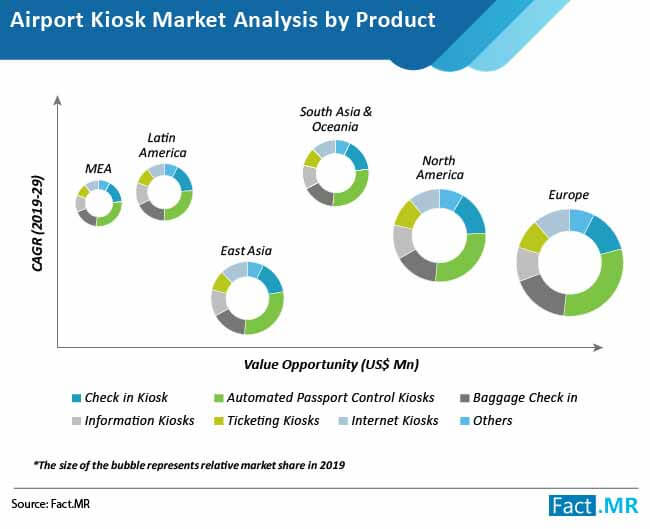 According to the report published by Fact.MR, the regions such as North America and Europe are the dominating regions in the airport kiosk market, owing to the robust investment by airport authorities in advancing facilities over there. Furthermore, it is expected that these regions will continue the same trend during the forecast period which will help to maintain their dominance in the global airport kiosk market.

On the other hand, owing to the relatively high number of airports in the US, it dominates the regional North American airport kiosk market with more than 80% of market share.

In Asian countries, there has been exponential growth in air travel, as the rapidly growing middle class is opting for a quicker medium of transportation. While this has not only created new opportunities for players operating in airport kiosk market, it has also created pressure on airport authorities to provide adequate facilities at the airport.

Owing to these reasons, investments in airport infrastructure have witnessed a surge, and this indirectly boosts the market for airport kiosk. The outlook for the Asian countries airport kiosk market remains positive, and players in this sector can expect significant opportunities to emerge during the forecast period. In addition to the significant growth in the emerging economies of China and India, Japan is likely to provide necessary support for the growth of the airport kiosk market.

On other hand, while considering the region of Latin America, the air traffic across Latin America has witnessed robust growth in the last decade. The growth in air traffic has necessitated investment in airports, with many airports across the region witnessing an upgrade. Special focus on technology incorporation and availability of self-serving kiosks have grown at a rapid pace in the region creating ample opportunities in the Latin America market during the assessment period.

In Middle East, investments in airport modernization and upgrade have remained concentrated in the GCC, with Saudi Arabia, UAE, and Kuwait accounting for a sizeable share of investments. Some of the prominent, multi-billion airport projects in the Middle East region includes Dubai World Central, King Abdul-Aziz International Airport, and Abu Dhabi International Airport which are expected to boost the airport kiosk market.

Fact.MR’s study on the airport kiosk market offers information divided into two important segments— by product and region. This report provides important data and information about the market dynamics and growth parameters associated with these categories.

A market study done by Fact.MR on airport kiosk gives out an exclusive information about how the market is gaining traction during the forecast period. The main aim of the report is to give different insights on the advancements in the global airport kiosk market.

This newly published report offers different market dynamics that are expected to influence the current and future status of the airport kiosk market over the forecast period.

The report on airport kiosk market starts with an overview of the market. Followed by the overview, a detailed assessment of airport kiosk supply chain analysis, business execution, value and volume chain analysis across the regional markets has been done in the report.

Fluctuations in annual prices over the forecast period is based on the expected percentage change and market trends in the upcoming years. Any increase or decrease in the price in the upcoming years is kept linear for all the regions. The approach was further confirmed by the primary respondents across the entire value chain of airport kiosk market, such as the operating market players and independent service providers.