A rise in temperatures is leading to proliferation of insects and pests which in turn creates a highly conducive environment for growth of insect regulators market.Fact.MR forecasts that the global market for insect growth regulators is to expand at a CAGR of about 4% between 2019 and 2027. 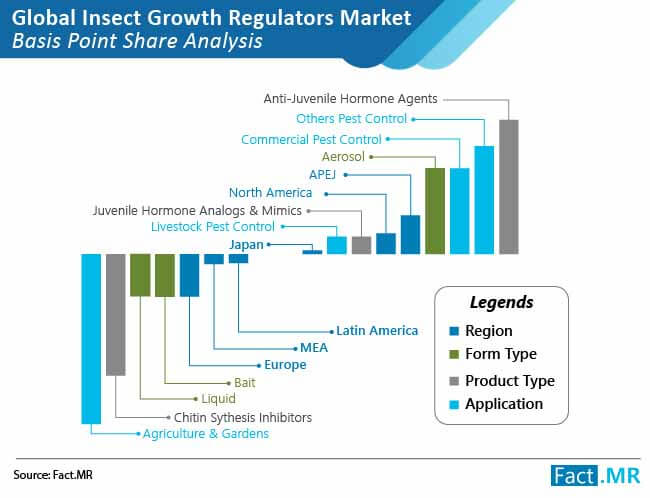 Organizations such as FDA and Food Safety - EU commission have set up the maximum residual limits of pesticides, for food products. Traditional pesticides such as DDT and Nitrofen have a MRL of 0.001 µg/Kg, while conventional insect growth regulators such as pyriproxyfen and methoprene have MRL of 1.0 and 0.02 µg/Kg.

The introduction of strict regulations have made the food products manufacturers make a shift from traditional pesticides to sustainable insect growth regulators. The market for commercial pest control insect growth regulators grew at a CAGR of 4.8% between 2013 and 2018. However, the CAGR will see an upward trajectory of 5.6% till 2027.

Efforts by organizations such as PETA and the World Pet Association have gained traction with an increasing number of pets such as dogs and cats being adopted. These numbers have risen by 2% and 1% in the last decade. Along with household pets, livestock and animal husbandry have also seen a prolific rise.

As animals are prone to insect infestation, demand for insect growth regulators which are specially prepared and safe for household pets and livestock has witnessed a significant momentum. On this premise, the market share for pet and livestock pest control is expected to increase by 40% through 2027.

The presence of prominent companies in the region also provides a small decrease in price due to reduced costs of logistics. The market in North America for insect growth regulators will create an incremental opportunity of around US$ 65 Mn between 2019-2027

This is fueled by a rise in epidemics. The APEJ region is expected to witness a stable demand for insect growth regulators during the forecast period (2019-2027). 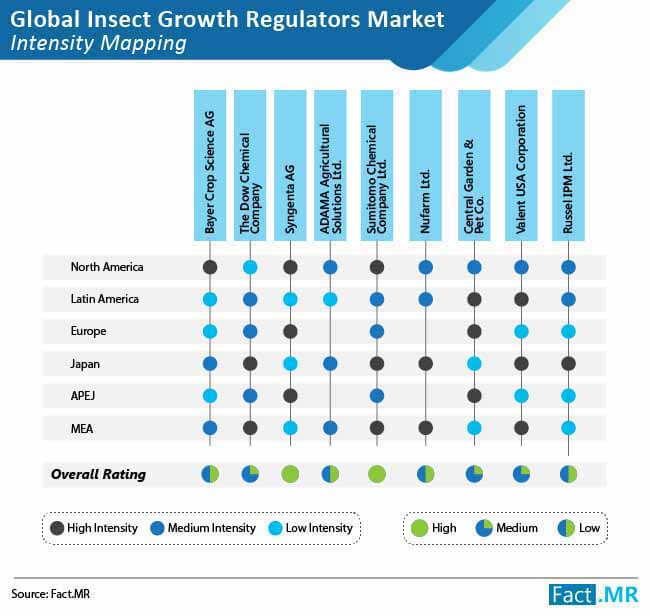 Many small scale companies have started their operations in various regions such as China, India, and Brazil, etc. where they are manufacturing insect growth regulators with hundreds of different formulations, which have different selectivity for a range of insects and show varied results depending upon the species of insects the products are used on.

Market leaders are focusing on developing insect growth regulators for insects such as ants, cockroaches, and mosquitoes, making their share in the market higher than that of regional competitors.

Mounting competitive pricing pressure and low profit margins have brought about a new wave of consolidation in the market. Players are entering into strategic agreements aimed at leveraging each other’s strengths and promoting mutually beneficial growth.

A list of key companies operating in the global insect growth regulators market provided in the report adds to the credibility of this comprehensive research study.

A refined cost structure analysis provides the report with an innate completeness, and study offered on the cost structure involves all the regional markets incorporated.

Current and future prospects for the global insect growth regulators market, containing current, as well as, future projected values forecast, price index and analysis on region-wise trends have been included in the report. Analysis offered on the factors mentioned above is comprehensive, and dedicated weighted chapters have been delivered on the same.

Regional market share of insect growth regulators along with year on year growth projections and capacity analysis is also highlighted in these chapters. Each regional chapter tracks the performance of the insect growth regulators market in the respective region with a focus on the growth of each market segment across the top countries of the region.

The report concludes with a weighted chapter on the competition landscape on the global insect growth regulators market, which profiles key companies contributing to the market.

Key and up-to-date developments related to the market players, who predominantly engage in the production of insect growth regulators, have been delivered. Market share comparison and analysis of these market players offered in the report, enable the reader to devise strategies for their businesses.

Company profiles have been incorporated in the report, which exerts detailed study on the development of the global insect growth regulators market, along with a comprehensive SWOT analysis on each player identified together with the company strategies identification and analysis.