The global insect repellent market is projected to expand at a healthy CAGR of 7% from 2021 to 2031, on the back of rising awareness of insect-borne diseases spreading fast across regions. India and China are expected to witness high sales over the next ten years.

The foremost objective of this new report by Fact.MR on the growth of the insect repellent market is to pitch insights on the market scenario, demand generators, and technological advancements in this space. The report provides a taxonomy elaborating on key segments.

The report also outlines visionary insights on the dynamics of the market, including the drivers, restraints, opportunities, trends, and pricing analysis, along with key success factors driving the sales of insect repellents. Market trends have been tracked in 20+ high-growth countries, including countries in North America, Europe, and East Asia, which hold bulk of the market share.

Over the 2016-2020 period, the insect repellent market has been on a constant rise, due to increasing cases of insect-borne diseases such as malaria, dengue, and others. Demand for insect repellents has increased in the past five years across many regions due to rise in the number of insects.

In FY2020 and 1Q of FY2021 some growth in the purchase of insect repellents has been observed, in a study conducted by the scientists at Britain’s Defence Science & Technology Lab. In the study, scientists have shown that insect repellents hold promising potential in killing COVID-19 pathogens on surfaces. This has somewhat attracted investments in the insect repellent industry this year.

Forecast assessment could be done by breaking down the period into three assessable periods, i.e., Short run, medium run, and long run

All in all, the insect repellent market is set to advance at a favorable CAGR of 7% during the assessment period (2021-2031).

According to the latest publication by WHO, vector-borne diseases account for more than 17% of all infectious diseases, causing more than 700,000 deaths annually. In addition, there are an estimated 219 million malaria (parasitic infection) cases globally, which result in more than 400,000 deaths every year.

Regions such as North America, East Asia, South Asia, and Europe have witnessed a large number of cases of dengue, malaria, and chikungunya. South Asia led the market with a share of 40.0% and is anticipated to witness significant growth in the near future. In Latin America as well, the market is projected to grow significantly due to growing awareness about insect-borne diseases. 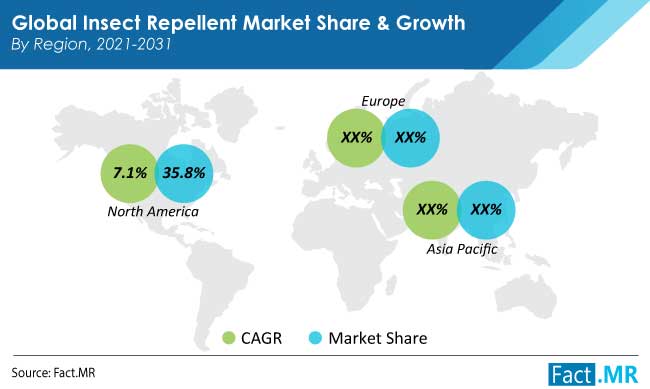 Why does the United States have huge potential for insect repellent manufacturers?

Other than being the biggest economy in the world, the United States of America has some of the biggest players involved in insect repellent manufacturing. The people and government of the country are well aware of insect borne diseases and they use various types of insect repellents to protect themselves.

Why are India and China becoming lucrative markets for insect repellents?

India is a developing country and has a history of many deaths from insect borne diseases. In recent years, with the help of government campaigns and NGO efforts, people have got more aware of these diseases and they are now looking for insect repellents to ward off these diseases. Introduction of different products has increased the sales of insect repellents in the country and India is projected to contribute to a strong market share over the forecast period.

China is the world’s biggest country population-wise, and also manufactures most of the synthetic ingredients that are used to manufacture insect repellents. With Covid-19 and the rise in cases in insect borne diseases in the country, the use of insect repellents is rising and the market is expected to see a rise in the projected period.

Why are sales of insect repellents surging in Brazil?

Brazil has one of the biggest rainforests in the world. The Amazon forest has a high number of insects and due to this, there are many insect borne diseases in the country. People are aware of that and to reduce these diseases, the market for insect repellents is huge in the country.

Which countries can have bigger market shares for insect repellents in the future?

What are the different types of insect repellents available in the market?

Insect repellents are used in various sectors and for different purposes, so naturally they are available in many forms in the market. Some of the common product types available in the market include sprays, lotions & creams, oils, mats, coils, and liquid vaporizers.

What kind of ingredient can you find in insect repellents and where can they be beneficial?

Some of the common natural ingredients are beautyberry (Callicarpa) leaves, catnip oil, critonella oil and essential lemon eucalyptus oil. Essential oils are acting as insect repellents in food packaging. Active food packaging is currently witnessing high demand in the food industry in order to provide protection to food. Such trends are acting as key drivers, contributing to the growth of the insect repellent market. Manufacturers are increasing their production of natural plant-based essential oils because of the rise in their demand.

Common synthetic ingredients used in insect repellents are DEET (N,N-diethyl-m-toluamide, ethylhexanediol, permethrin, picaridin and IR3535). For protection against mosquito bites, the U.S. Centers for Disease Control (CDC) recommends DEET and picaridin (icaridin, KBR 3023) because of their longer protection. Since DEET ingredients have been rated as slightly toxic by the U.S. Environmental Protection Agency, companies in the insect repellent market are trying to create mosquito repellents that last up to 72 hrs.

How has COVID-19 impacted sales of insect repellents? 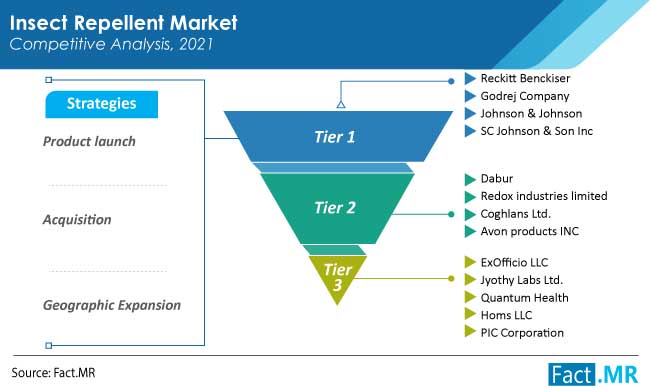 Aforementioned key players in the market for insect repellents rely on a blend of organic and inorganic strategies to deepen penetration across lucrative markets. These strategies include product launches, collaborations with key players, partnerships, acquisitions, and strengthening of regional and global distribution networks.

Similarly, recent developments related to companies manufacturing insect repellents have been tracked by the team at Fact.MR, which is available in the full report.

Q. Which type of insect repellent is most in demand?

Depending on the region, there are various types of insect repellents that are in demand, but generally, sprays and liquid vaporizers are most commonly used.

Q. What type of insect repellent can be used for children below age 5?

Children who are below age 5 have delicate skin, and applying insect repellent creams or lotions can be itchy, and some can be even harmful. So to avoid this, roll-on insect repellents can be used to put on their clothes, which will help protect childr

Q. What kind of ingredients are better to use?

Depending on use and requirement, both, natural and synthetic ingredients can be used as needed. If needed for longer-lasting results, synthetic products work better.

Q. Can essential oil be used as an insect repellent?

What is the study period of this market?

The Insect Repellent Market market is studied from 2021-2031.

What is the growth rate of Insect Repellent Market?

Who are the key players in Insect Repellent Market?

Which country has largest market share in Insect Repellent?