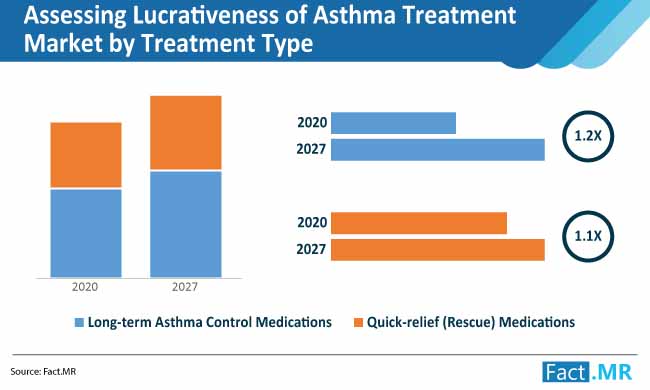 Demand prospects for asthma therapeutics are likely to gain strength, owing to increasing awareness among patients regarding this condition. This should have led to linear growth of the asthma treatment market; however, a spurt in the sales of generic drugs, thriving on the back of patent expiration of branded drugs, is projected to limit market potential.

A recent study has been recently added to the broad report repository of Fact.MR, which portends that, the asthma treatment market would record a steady CAGR of 2.3% during the forecast period (2020-2027).

Use of antibiotics for the treatment of asthma is debatable, as numerous pieces of literature highlight side-effects regarding their long-term consumption, such as dysphonia, sore throat, increased heart rate, and tremors. This is encouraging patients to adopt alternative therapies as additional panacea to treat asthma.

Though alternative therapies lack designation as the mainstream treatment, Yoga, Unani, and similar therapies are witnessing high adoption in developed countries of North America. However, the trend of replying on alternative therapies is more pronounced in China and India, where these therapies received first recognition. As Asia Pacific is a key destination for medical tourism, the influence of alternative therapies from developing countries is projected to fast-penetrate developed regions, thereby inhibiting significant sales opportunities for market players.

North America would retain its pole position in the asthma treatment market, while the market in Asia Pacific is projected to witness the fastest growth rate. During the forecast period, North America would lose its market share to Asia Pacific, as leading players are gradually scrambling towards developing countries such as China and India to cash in on relatively cost-effective production opportunities. For instance, F.Hoffmann-La Roche Ltd. announced the inauguration of a new manufacturing facility for its pharmaceutical division in Shanghai, China.

Additionally, North America accounts for a high concentration of leading players; ones that generally develop branded drugs. On the contrary, players in the Asia Pacific asthma treatment market relatively hold a low market position, and are involved in the development of generic drugs. As a result, threat of patent expiration affects the North American market more adversely than Asia Pacific. On the back of shifting market trends towards Asia Pacific, the regional asthma treatment market is projected to gain significant pace during the forecast period.

What is the expected growth of Asthma Treatment Market during 2020-2027?

How much growth will Long-term Asthma Control Medications Account for in Asthma Treatment Market?

Long-term asthma control medications are projected to witness a sluggish CAGR of around 2.6% during the forecast period (2020-2027).

Behavioural health treatment market is estimated to grow at sluggish CAGR of 2.4% by 2030. Advent of...

The global addiction treatment market is poised to expand at a CAGR of 6.7% during the forecast peri...