Model based software testing is anticipated to witness a steady rise in popularity as the demand for software increases for use in several applications. However, the complex nature of the model-based testing approach is expected to be a major challenge for market players to overcome.

Technological proliferation and digitization have increased substantially over the past few years and this trend is expected to be prominent across the forecast period. Software has become increasingly complex and manual testing procedures are now regarded as outdated and time-consuming.

The model based testing technique has proved to reduce errors as it enables amendment to modules and does not affect resultant dependencies. Model driven testing allows testing on different machines and is a time-saving method that is anticipated to witness steady growth in demand over the coming years.

Increasing digitization is fuelling the demand for novel software and this is expected to primarily drive demand for model-based testing (MBT) services across the forecast period.

However, the growth of the model based testing market is expected to be hampered by the complex nature of model based testing tools and complex procedures that demand the employment of highly skilled programmers which incurs high costs to organizations. 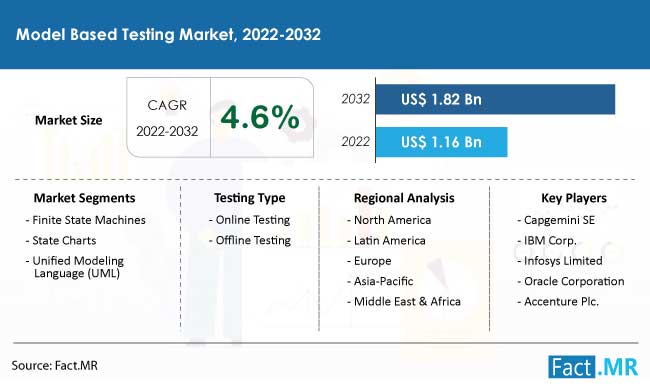 How is the Model-Based Testing (MBT) Market Moving Forward?

Technology has become a crucial aspect in all walks of life and this has substantially increased the demand for software across the world. The increasing need for faster testing tools and services is expected to fuel demand for model-based testing (MBT) services over the forecast period.

High efficiency and the ability to detect memory leaks are expected to drive demand for model-based testing solutions.

How are Start-ups Leveraging Model Based Automation Testing?

Model based testing is faster than manual testing procedures but this can be enhanced by the integration of automation technologies and this is what new entrants and start-ups in the model based testing market are expected to focus on over the coming years.

Such start-ups are expected to revolutionize the model based test automation industry landscape. New entrants in the global market can focus on the integration of advanced technologies such as artificial intelligence, machine learning, etc., to launch novel testing solutions and make their mark in this space.

Which Region Spearheads Global Demand for Model Based Testing?

Rapid adoption of novel model based software testing techniques in this region is also anticipated to drive demand for model based testing solutions across the forecast period. The United States is projected to be the prime market in this region over the years to come.

The Europe model based testing market accounts for a notable market share of 24.7% in the global industry landscape in 2022. Increasing demand for software products and rising digitization are expected to drive model based testing market growth in this region across the forecast period. Germany, France, and the U.K are expected to be significant markets in this region through 2032.

A complete overview of all the major regions and their statistics has been provided in this latest model based testing market research study by Fact.MR, a market research and competitive intelligence provider.

The global model based testing market stands at US$ 1.16 billion.

The global market is predicted to evolve at 4.6% CAGR through 2032.

At present, the European market holds a valuation of US$ 287 million.