Accroding to the communication-based train control (CBTC) system market analysis by Fact.MR, communication-based train control systems for train hold more than 45% market share, which is estimated to be valued at US$ 24.5 Bn by 2031. CBTC system demand is estimated to surge at the rate of 11.5% CAGR and create a value of around US$ 10.4 Bn by 2031.

Rail accidents is the prime reason for the adoption of CBTC systems, and in terms of accidents, according to the International Union of Railways, Europe is the leading region with 58% or 6,239 rail accidents over the last two decades, followed by Africa with 29% or 3,048 rail accidents. In 2019, more than 60% of rail accidents in Norway occurred due to rail collisions.

CBTC system are expected to capture more than 2/5 share of overall automatic train controllers. Communication-based train control systems for passengers and freight rail systems are widely used to reduce human error and protect cargo and goods from theft. Demand for CBTC systems for subways is continuously increasing, owing to high adoption across developed countries to make their rail lines safe.

Furthermore, ETCS (European Train Control System) is likely to grow at a double-digit CAGR and offer a billion-dollar opportunity. European countries such as Germany and the U.K. are prominent contributors to the market. Also, ETCS is widely adopted in other regions such as South Asia & Oceania and the Middle East & Africa.

For improving passenger experience and reducing the risk of train mishaps in the rail transportation sector, automation technologies have witnessed a strong growth rate over the past few years. Semi-automatic trains or driverless trains are in application in countries such as South Korea, Japan, China, and UAE.

Global demand for communication-based train control systems is likely to increase at 11.5% CAGR and create an absolute dollar opportunity of around 4.1 Bn during the assessment period.

Will Infrastructural Development across the Globe Provide a Spurt to Demand for Semi-automatic Train Operations? 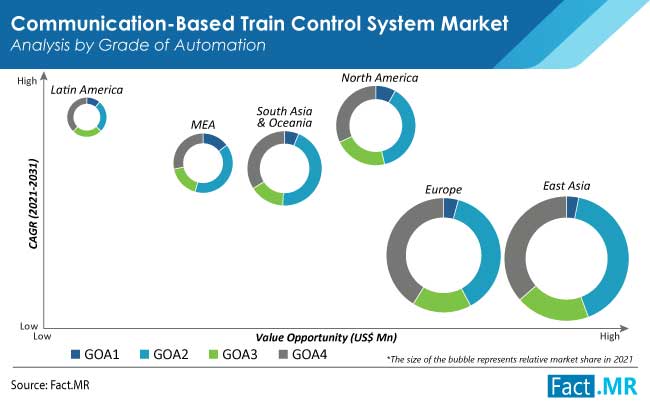 The Asia Pacific market is largely dominated by East Asia, with China holding a majority of market share. South Korea has developed more than 170 km of fully automated new metro lines and also extended its existing metro lines by nearly 20 km in the last 10 years, followed by UAE with 80 km and 27 km, respectively.

However, from the perspective and deep analysis of the latest trends in the communication-based train control system space, South Asia and Oceania is likely to gain traction during the assessment period. This is likely to increase demand for unattended train operations across the Asia Pacific region.

How are Middle Eastern Countries Developing Rail Infrastructure through Collaborations?

GCC countries and North Africa are holding nearly 1/3 market share in the MEA market. Dubai is solely having nearly 120 km fully automated metro rail lines, out of which, around 90 km is a new line and 30 km is the extended line.

Furthermore, Middle Eastern countries have around 116 fully automated metro lines, where around 69% are capable of carrying 300 to 700 passenger, and the remaining 31% is able to carry under 300 passengers, per train.

MEA has more than 12 projected under construction sites that are likely to be completed by 2026, and will construct more than 500 km of rail track. Moreover, countries are looking to develop fast trains in urban areas, and this is opening up opportunities for manufacturers and suppliers.

How is the U.S. Market for CBTC Systems Shaping Up?

On the other hand, the CBTC systems market in Canada is projected to grow 3.8X at a CAGR of 13%. Canada is shifting its focus from metro trains to high-speed trains, and releasing tenders for the construction of the tracks. This is likely to offer a million-dollar absolute dollar opportunity to market players over the forecast period.

Which Countries in Europe are Adopting High-speed Rail at a Fast Pace?

Europe is the second-largest market holding nearly one-third share in the global communication-based train control system market, and likely to grow at 11% CAGR over the decade.

Communication-based train operation systems in France are gaining traction, where various cities such as Paris, Lyon, and Marseille are the key contributors towards the adoption of this high-end technology. 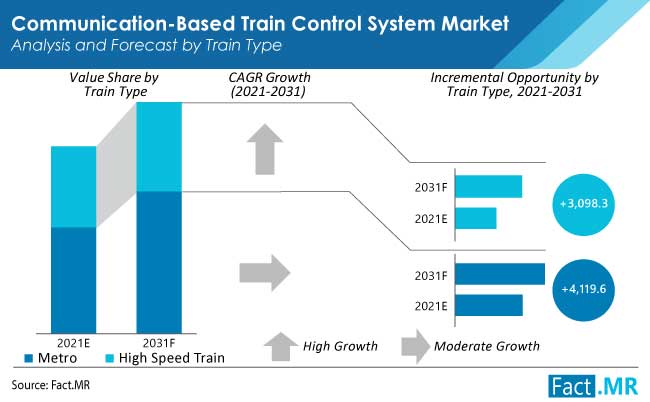 Which Type of Train Accounts for the Largest Share in CBTC Systems?

Communication-based train control systems are widely used in metros and high-speed trains. However, countries are prioritizing metro rail as it entails low cost and has numerous benefits as compared to high-speed train.

Metro trains account for a higher market revenue, and the segment is projected to expand at 11.2% CAGR through 2031.

Communication-based train control systems consist of four grades of automation, known as GOA1, GOA2, GOA3, and GOA4. Among these, GOA4 is the highest level and provides a driverless service that also requires fewer attendants. It requires high-end rail infrastructure and high cost to implement.

However, majority of countries are limited to GOA3. GOA2 is adopted in almost every country, and this makes it the largest market shareholder holding more than 1/4 market share.

Companies are devoted to reducing CBTC system setup cost to gain a competitive edge. Moreover, more than 50% market share is acquired by the top 5 players who are keenly concentrating on mergers, acquisition, partnerships, etc.

Some of the recent development are as follows:

More recent developments related to the market have been tracked by Fact.MR analysts to identify the strategies adopted by players as well as technologies that may transform the industry. Technologies that are developed by leaders have been discussed in the full report and available on demand.

High demand for communication-based train control systems in China is due to majority of key service providers based in the country, acquiring more than 2/5 market share.

South Asia is a rapidly emerging region with its market likely to rise at 12% CAGR and gain 62 BPS by 2031.

As countries are in the race towards infrastructure development, those such as the United States, Brazil, Germany, China, and India are projected to drive most demand for communication-based train control systems.

Metro trains hold the largest share in the market.

Grade automation 2 is largely adopted by numerous developing countries as a rail up-gradation policy; GOA2 accounts for the largest market share across all regions.

North America is one of the most prominent markets, where the United States will acquire nearly 80% market share and is anticipated to surge at 12.8% CAGR.

*101 figures and 60 tables includes by FactMR