Demand is being driven primarily by increased defense spending to counter external aggression. Another driving factor for ammunition manufacturers is the development of lightweight bullets with polymer casings. Demand for Centerfire ammunition is expected to skyrocket, accounting for more than 2/3rdof total revenue by 2020, making it the gold standard for the defense industry.

Several new weapon and ammunition development programmes are also underway in order to develop lighter but more lethal ammunition with a greater range. Such developments are being aided by the rapid advancement of technology. The demand for advanced weapons and related ammunition comes primarily from Europe and Asia-Pacific countries, which is either replacing ageing equipment or expanding their inventory to strengthen their armed forces.

According to Fact.MR, a market research and competitive intelligence provider, the global market for ammunition is expected to grow at a 5.7% CAGR over the next ten years and is expected to reach US$ 20 Billion by 2022. Because of the lightweight nature of the trending bullets, soldiers can carry more ammunition, increasing the demand for ammunition.

During the forecast period, disruptive trends such as online sales channels are expected to boost growth for small caliber ammunition. The growing consumer interest in sports shooting activities is critical to the widespread adoption of small caliber and lightweight ammunition through online sales channels. As a result of these factors, the global ammunition market is expected to grow 1.75x between 2022 and 2032.

For example, National Shooting Sports Month® in August 2021 will be a great time for America's millions of first-time firearm owners to enjoy using their new firearms, whether in a training course, competition, or simply having fun shooting targets with friends. According to the National Shooting Sports Foundation, 8.4 million people bought their first firearm last year, with many of them being first-time buyers.

Online sales channels are gaining traction among millennial consumers who shop for everything online. Manufacturers are investing in the development of novel products to increase consumer traction. Plastic guns, lightweight polymer casings, and reusable casings are just a few examples of how manufacturers can use innovation to attract, engage, and delight commercial customers. These items are also only available online.

Budget Cuts in Europe and the United States are expected to restrain Global Ammunition Market Growth over the Forecast Period.

Significant budget cuts have occurred in developed regions such as Europe and the United States. This has had an impact on the military budget and, as a result, the ammunition market. For example, in 2012, US military spending fell from $711 billion to $668 billion.

As a result of such budget cuts, countries find it difficult to stay current through mediums such as modernization programmes. As a result, these factors are expected to limit the global ammunition market's growth during the forecast period.

What is the Growth Outlook for Ammunitionis the U.S?

The United States government has been making significant investments in military and armed forces enhancements, which is supporting the country's market growth. The United States will generate more than 33% of total ammunition demand. A CAGR of 4% is anticipated for the market in the U.S.

In May 2021, the Department of Defense released the FY 2022 President's Budget, which proposed an increase of 1.6% in defense spending over FY 2021. Civilians and local security forces are acquiring small-caliber ammunition. Furthermore, the key players are working to improve their online presence, which is expected to supplement growth.

How do Growth Prospects appear in the German Market?

Germany reported a record high in NATO defense spending for 2021, submitting a budget of €53 billion ($63.8 billion) for the current fiscal year. This figure also represents a 3.2 percent increase from 2020, when spending was nearly €51.4 billion. BAE Systems, Inc. was awarded the first contract from the Space and Missile Systems Center's Space Production Corps in June 2021 to supply M-Code Military Global Positioning System user equipment to Germany.

BAE Systems will deliver advanced M-Code GPS technology to Germany under the Foreign Military Sales contract, enabling precise, resilient, and secure geolocation and positioning capabilities that will improve the effectiveness of allied operations. Such developments will drive demand at a CAGR of more than 3% through 2032.

Is Asia likely to emerge as an Opportunistic Ammunition Industry?

Through 2032, Asia is expected to be the largest revenue contributor to the global ammunition market. East Asia and South Asia, according to Fact.MR, offer lucrative growth opportunities, with CAGRs exceeding 3.1% and 3.5%, respectively. Rising defense spending is the primary growth driver.

South Korea's Defense Acquisition Program Administration (DAPA) announced in June 2020 that it had selected Dasan Machineries, a local firearms manufacturer, as the preferred bidder in a US$ 3.1 Mn programme to replace the S&T Motiv K1A 5.56 mm carbine currently used by the Republic of Korea Army's (RoKA's) Special Warfare Command.

Why is there a High Demand for Rockets and Missiles?

In the face of growing global uncertainty, countries are investing in long-range missiles and rockets. Fact.MR anticipates that demand will increase at a CAGR of more than 4% over the next decade.

In August 2021, the United States approved the sale of Harpoon over-the-horizon anti-ship missile test kits to India to counter China in the Indian Ocean region, providing a significant boost to the Indian Navy. Such initiatives are significantly increasing demand.

What role does Centerfire Ammunition play in market growth?

Centerfire Ammunition has become a Universal Standard in the Military, Police, and Security Forces Surging up the Ammunition Market

Centerfire ammunition is the market leader, having emerged as the gold standard due to its ability to withstand high-pressure shooting, recyclable casings, and safety features. In 2020, the segment generated more than 66% of revenue.

The United States Army announced in October 2020 that the SAW and M4 replacements would enter service in 2022. The new caliber provides the soldier with both a rifle and an automatic rifle that fires the same round and is effective beyond the 600m mark of existing light calibers. 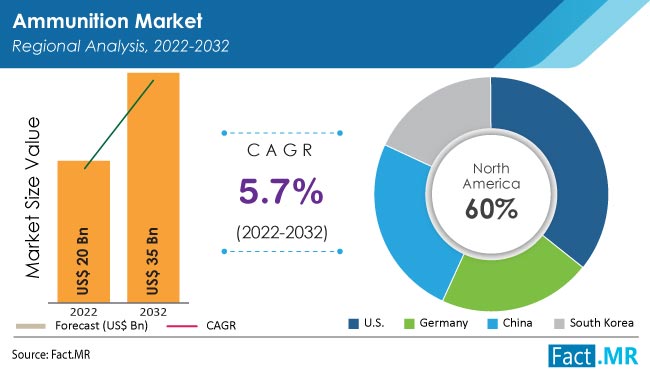 Because of the presence of various players supporting the armed forces, the ammunition market is fragmented. These players are focusing on a variety of strategies to broaden their product offerings and strengthen their geographic presence. New players are expected to enter the market as technology advances.

What was the market worth for ammunitions 2021?

As of 2021, Fact.MR estimates the ammunition market to have reached US$ 19.2 Billion.

What is the expected worth of the Ammunition industry in 2022?

By 2022, Fact.MR expected demand for Ammunition to reach US$ 20 Billion

What is the expected forecast CAGR for Ammunition from 2022-2032?

At what value will the market for Ammunition close in 2032?

By 2032, the market for ammunition is likely to be valued at US$ 35 Billion

What is the expected market value for the U.S ammunition market?

By 2032, Fact.MR expects the U.S market for ammunition to expand at a 4% CAGR

How opportunistic is the Chinese market for application transformation?

China is expected to register a 3.7% CAGR with regard to the Ammunition industry

What isthe expected growth rate for the Japanese market?

Japan is expected to document a CAGR worth 3.5% in the Ammunition market

Which type will account for the maximum ammunition revenue?

Centerfire ammunition is the market leader, having emerged as the gold standard, in 2020, the segment generated more than 66% of revenue.