Global 4,4-Dichlorodiphenyl sulfone (DCDPS) market is forecast witness modest growth of around 4% between 2019 to 2029. Of all applications of DCDPS, engineered plastics account for around three fourth of market share through 2029.

Escalating demand for high performance sulfone polymers for various end-use industries such as the electrical industry is purported to be the main demand driver.

In addition, other factors such as, continued and increased applications in aircraft, automobiles, and medical industry has created enormous opportunities for DCDPS market players.

Key DCDPS player such as Solvay are growing on the back of their forward integration strategies for the production of sulfone polymers. 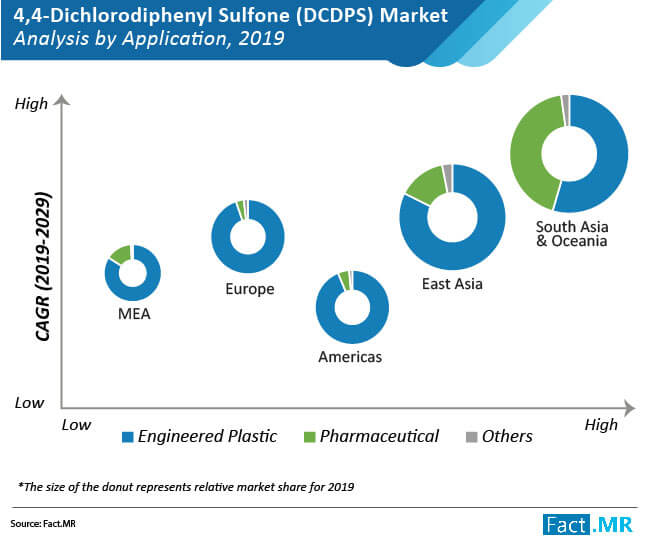 With, 72% of leprosy cases from South East Asia, there is an increased demand for DCDPS for manufacturing dapsone in the region.

However, there have been very few leprosy cases in western countries such as US, UK and Germany. Thus the demand for pharma grade DCDPS from these countries is minimal.

From a regional perspective, South Asia & Oceania collectively account for largest market share in global 4,4-Dichlorodiphenyl Sulfone (DCDPS) market, on the back of large production facilities from India.

Companies such as Solvay S.A and Vertellus have established their production lines in India, due to easy availability of raw materials and low production cost.

India is one of the largest exporters of DCDPS monomer to strategic locations such as Europe and North America. Owing to its favorable trade relations with EU and US, India has an added trade advantage over China for DCDPS trade.

East Asia ranks second in terms of demand, which is primarily driven by China. The country has currently around 20,000 tons of DCDPS production capacity.

Furthermore, markets in Europe and North America have witnessed steady growth with demand mainly for engineered plastic such as PSU & PESU. 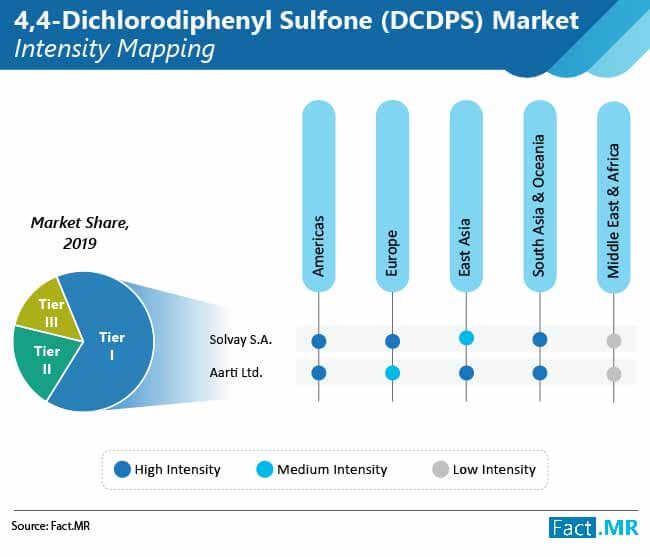 Global 4,4-Dichlorodiphenyl Sulfone (DCDPS) market is highly consolidated in nature. Top three players in market account for over 60% of revenue share at a global level.

Manufacturers of DCDPS market are focused on reducing the cost of DCDPS production on priority. In addition, players in the market have adopted forward integration as a prime strategy.

Key stakeholders such as Solvay, BASF and Sumitomo follow captive consumption of DCDPS for its sulfone production units.

Furthermore, companies like Aarti India Ltd. and Atul Ltd. are working in alliance with Dapsone producers such as Sai life sciences, and Macleods Pharmaceuticals Limited, to ensure proper supply chain management of DCDPS for its end use industries.

Solvay in 2019, started its new production line for sulfone products. Company is producing polyethersulfone to cater to the automotive sector, paints and coatings.

Thus, they have substantially raised demand for DCDPS as a key raw material over the estimated period of 2019-2029.

Fact.MR has studied the 4,4-Dichlorodiphenyl sulfone (DCDPS) market with detailed segmentation on the basis of grade, application and key regions.

Who are the key players in the 4,4-Dichlorodiphenyl Sulfone (DCDPS) market?