With the growth in emphasis on ensuring workers’ safety across various end-use industries around the world has provided an impetus to adoption of several protective systems such as gas detection equipment. Several industrial standards, along with governmental norms and regulations implemented to ensure safety and health of laborers in manufacturing industries has necessitated requirement for gas detection equipment.

As smart gas detection equipment utilize wireless technology such as ZigBee, Wi-Max, Wi-Fi, and Bluetooth, end-users are enabled to track function of the product even from remote locations at all times. Additionally, companies producing gas detection equipment have introduced innovative concepts by focusing on the enhancement of the sensitivity & efficiency of sensors in detection of harmful gases. However, market is expected to grow 1.7X over the period of 2022-2032.

The highly sensitive CO and smoke detectors impart appropriate early warning, which in turn enables prompt investigation, control, and actions before thoughtful damage. The leading players in the market have also been concentrating on the integration of sensors capable of detecting more than one gas.

How Governments Around the World Are Acting Against Gas Detection?

Gas detection equipment plays a main role to minimize the damages caused due to leakage of methane through power generation, natural gas extraction and transportation. For instance, in 2020, the government of Canada committed to reduce the oil & gas methane emissions by 45% by 2025. Such activities is expected to increase the global sales of gas detection equipment’s.

The gas detection industry is at different stages of growth globally. The need to comply with increasingly tough safety and environmental regulations is driving investment in toxic and combustible gas detectors among oil and gas, refining, petrochemical, and mining customers.

Industrial accidents, such as the 2010 catastrophic explosion of the Deepwater Horizon oilrig, continue to emphasize the need for better process measurements and safety warning systems. Moreover the Total’s Elgin platform gas leak that took place in March 2012 has raised serious concerns and is pushing Governments and regulatory bodies to propose stricter safety regulations. The occurrence of these incidents, across the globe, that involve hazards due to asphyxiation, explosions and threat to life are a constant reminder of the need for constant monitoring and detection solutions.

What’s Bolstering the Growth of Players in U.S?

Robust investments in R&D activities, which have driven innovation, have extensively fueled the growth of manufacturing and oil & gas industries. This has further shaped the demand for protective products such as gas detection equipment in these industries for a wide range of applications. The manufacturing and oil & gas industries will prevail as the largest end-users of gas detection equipment. However, U.S is expected to grow at a CAGR of 5.8% over the forecast period.

Why China is a pivot point for gas detection equipment manufacturers? 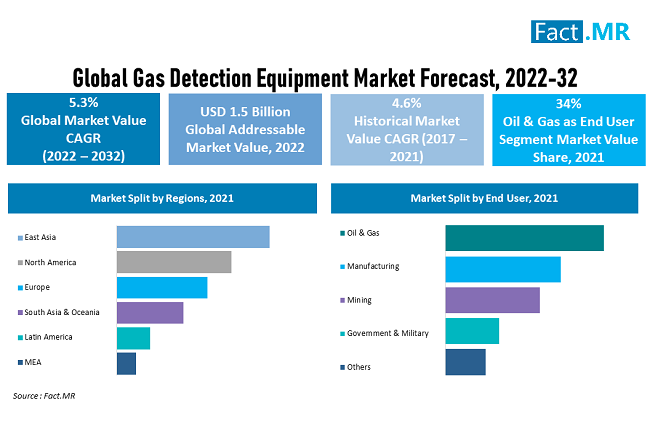 What Is The Consumption Scenario Of Portable Type Of Gas Detection Equipment?

The rising initiatives to change old and outdated type of gas detection equipment in all the industries including oil & gas and mining sector, which is favoring the progression of this market. Building automation is projected to appear as a key end-use segment for portable type of product. The portable gas detection equipment is estimated to be valued at USD 341 Mn in 2022 and is likely to grow at a CAGR of 3.9% by the end of 2032.

Which segment as end user is likely to witness accelerated growth?

Oil & gas, manufacturing, and mining are several end use industries with high possibilities of gas leakage, which can result into several destruction to employees and workplace at their respective units. The use of gas detection equipment in oil & gas industries is expected to grow 1.8X, which results to reach the valuation at USD 944 Mn by the end of 2032.

In some serious cases, there is probability of employee’s deaths due to suffocation. In order to minimize or avoid such circumstances, numerous companies around the world are increasing the focus on integrating different safety measures like gas detection equipment. The mining as end users is expected to grow at a CAGR of 5.6% over the period of 2022-2032.

The market is likely to offer an absolute dollar opportunity of around USD 1.1 Bn during 2022-2032.

East Asia is projected to hold the leading market share of around 32% in 2022 and presumed to remain in same growth curve by the end of 2032.

Portable segment as type of gas detection equipment is expected to be valued at USD 341 Mn in 2022.

The government and military segment is expected to reach a market valuation of USD 183 Mn by the end of 2022.

*121 figures and 42 tables includes by FactMR