Global street sweepers market is projected to grow at a value CAGR of more than 7% between 2019 and 2027. High demand for environmental cleanliness in urban areas is receiving significant impetus on back of disease prevention.

Infectious diseases such as cholera, dengue fever and malaria etc. can spread rapidly as a result of unclean surroundings.

As a result, municipal corporations are investing a significant chunk of their revenue on waste management to mitigate spread of contagious viral diseases.

Street sweeper machines use brooms and mechanical or vacuum technology to pick up garbage in urban areas.

On this premise, the global street sweeper market is projected to create an absolute $ opportunity of more than US$ 1.3 billion.

It is projected to be valued at more than US$ 3 billion by the end of the forecast period (2019 – 2027), predicts the report study recently published by Fact.MR.

The global automobile industry is undergoing huge disruption with increasing adoption and popularity of electric and hybrid vehicles.

Street sweeper trucks which are electrically powered are witnessing rampant adoption since their institution owing to the benefits they offer such as zero emissions and energy efficiency.

In addition, governments of several countries are promoting the use of electric vehicles which is encouraging end users of street sweeper machine such as municipal corporations, manufacturing industries, airports, etc. to increase share of electric street sweepers within their fleet.

As a result manufacturers are also developing high capacity electric street sweepers to cater to the rising demand.

Fact.MR opines that street sweepers which are electrically powered are estimated to create an absolute $ opportunity of more than US$ 450 million, and are anticipated to grow at a robust CAGR of 16.4% during the forecast period (2019 – 2027).

Ability of the mechanical broom sweepers to pick up heavy or packed-down material such as road millings makes it the most preferred street sweeper.

In addition, mechanical broom sweepers come with lesser fitments for garbage picking as compared to other street sweepers and therefore require less maintenance.

In these regions mechanical broom sweepers are used to clean sand and other abrasives that are found on the road in the winter season for better traction.

In Fact.MR’s report, it is projected that the mechanical broom sweepers will hold more than 70% of market share in terms of value and are anticipated to grow at a value CAGR of 6.4% by the end of 2027. 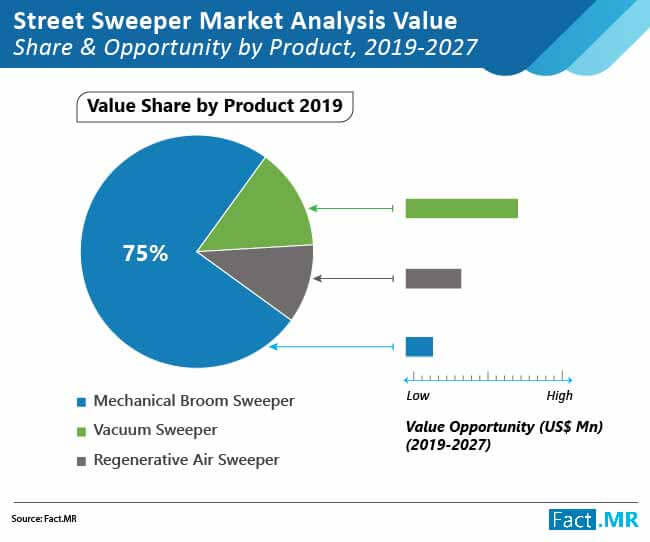 Developed Regions to Remain in Forefront

High rate of urbanization and rapid industrialization in the developed regions such as Europe and North America have created significant demand for the street sweepers in the last five years and this is expected to create the maximum opportunity in the global street sweeper market during the forecast period.

For instance, in the year 2018, Municipal Corporation of San Francisco announced a budget of US$ 65 million for street cleaning.

Further, in developing regions such as Asia, demand for street sweeper is burgeoning, owing to governments’ initiatives in waste management.

Fact.MR anticipates that Europe and North America are collectively projected to hold more than 45% value share of the global street sweeper market during the forecast period. 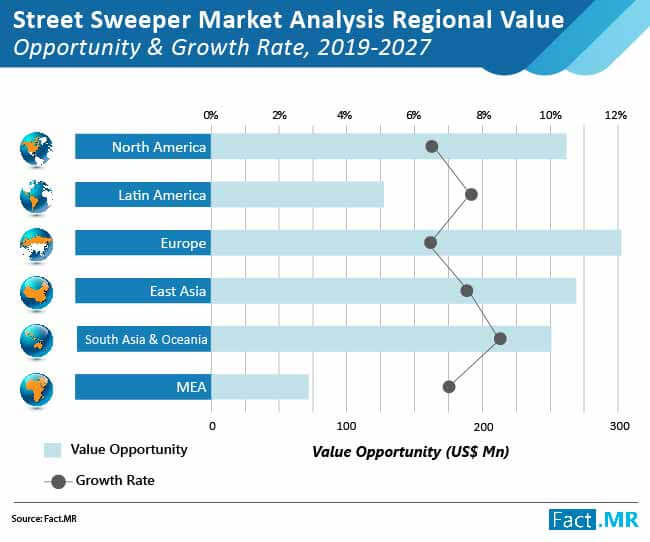 New Product Launches to be the Major Market Stimulator

Market leaders in the global street sweepers market are introducing new products in order to maintain their position in the market.

Leading players are introducing electric street sweepers to cater to the rapidly growing demand for it from municipal corporation end use.

In May 2018, Dulevo International S.p.A. introduced its electric street sweeper D.Zero2 in the UAE in order to cater to the high demand from Middle East and Africa.

This report offers comprehensive data and information about important market dynamics and growth parameters associated with these categories.

Which segment is expected to witness significant demand for street sweepers market in future?

Which are the dominant countries in the global market for street sweepers?

Europe is projected to create an absolute $ opportunity of more than US$ 300 million and it is anticipated to hold maximum share in terms of value in the global street sweeper market by the end of the forecast period.