The APAC will dominate the global market, registering a growth opportunity worth US$ 55 Billion from 2022 to 2032.

Fact.MR has predicted the Chlor-Alkali market to upswing at 5.4% CAGR between 2022 and 2032 in comparison to the 5.3% CAGR throughout the historic period. The increasing emphasis on the sustainable manufacturing process and increasing application of Chlor-alkali derivatives act the prominent drivers across the globe.

Manufacturers are all set to adopt the PFAS-coated (Polyfluoroalkyl Substances) membrane technology in the upcoming future and avoid the usage of Chlor-alkali in chemical & other end-use industries to reduce the adverse effects on the environment.

As urbanization proliferates, so is the demand for wastewater treatment. Societal and environmental pressures have prompted industries, households, and agricultural stakeholders alike to reduce wastewater generation and thoroughly treat the same before discharge.

Globally, 56% of household wastewater flows were safely treated in 2020, according to UN-Water. Countries are striving to increase the same to 100%, for which demand for efficient wastewater treatment systems is inclining. Hence, the preference for Chlor-alkali-based treatment is expected to surge in the coming years.

The Chlor-alkali process helps remove unwanted solvents, via the process of electrolysis. It is typically useful for removing salts from brine. The by-products- chlorine, caustic soda, and hydrogen, can then be used across various chemical processes to manufacture other useful products.

According to the European Chemical Industry Council, the output of the global chemical industry grew by 3% in 2021 and 2% by 2022. Furthermore, it is estimated that sales in 2019 were valued at US$ 4.1 billion, with sales expected to peak at nearly US$ 7.5 trillion by 2032. Attributed to these figures, demand for the Chlor-alkali process to generate useful chemicals is bound to rise significantly.

Owing to the increasing environmental concerns, several governments have enforced strict regulations are enforced, thereby likely to impede the market growth. Chlor-alkali uses asbestos and mercury, which have undesirable effects on the environment. Lately, the US NGO Health Building Network (HBN) has advised that the nonstop usage of mercury and asbestos in the supply chain of PVC and other chlorine-based products, is a cause of environmental pollution.

Nevertheless, prominent market players such as DowDupont which has established an example by converting asbestos-based diaphragm technology to non-asbestos operations to align the production facility with the regional regulations. As per the Fact.MR’s recent analysis, key vendors are planning to avoid using harmful production technologies and adopt the PFAS-coated (Polyfluoroalkyl Substances) membrane technology in the upcoming future. Besides, the endless demand for PVC will always create a sustainable Chlor-alkali market.

How Opportunistic are Growth Prospects across the U.S Market?

Fact.MR’s recent analysis reveals that North America is expected to possess nearly 35% of the market share through 2032. The Chlor-Alkali market evaluates nearly US$17 Bn in 2022 and is estimated to yield a dollar opportunity of US$ 26 Billion through 2032, following a CAGR of 4.3%. Manufacturing technology has strategically shifted from the diaphragm and mercury cell system to the membrane cell process globally, owing to increasing mercury pollution levels. Hence, industries are transitioning towards more sustainable manufacturing practices, spurring demand for Chlor-alkali derivatives.

In addition, the presence of chemical industries in the U.S is driving the growth of Chlor-alkali in the region. Thus, new and modern facilities will drive higher utilization and increase profitability.

Why are Chlor-Alkali Providers Venturing into China?

Demand for Chlor-alkali derivatives manufactured from caustic soda is expected to witness significant growth across Asia, exhibiting promising growth prospects across the Indian, Chinese and other East & Southeast Asian landscapes. Demand is primarily due to uptake in wastewater treatment facilities.

Besides, rising aluminum production, and growing paper and pulp industries in China, India, Indonesia, and Malaysia are expected to drive growth in the Asia-Pacific Chlor-alkali markets. Presently countries in Asia such as China and India account for a major chunk of caustic soda exports thus boosting the market in these regions.

According to Fact.MR, Asia is expected to accumulate more than 40% of the market share for chlor-alkali. As per the forecast report, the market is likely to reach nearly US$ 35 Billion in 2022 which is likely to expand to US$ 55 Billion, following a CAGR of 4.6% throughout the forecast period. 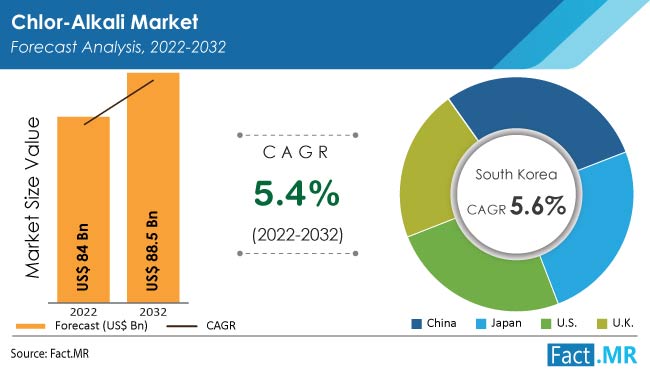 By Application, which Chlor-Alkali is expected to Dominate?

As per Fact.MR estimates, chlor-alkali chemicals for vinyl production are likely to be the highest, underpinned by the increasing trade of polyvinyl chloride. In 2022, the trade value of vinyl chloride polymers and other olefins is expected to be worth US$ 20.48 Billion.

The use of chlor-alkali derivatives, including polyvinyl chloride plastics in the construction sector, is anticipated to broaden expansion prospects for the entire industry. As per the report, the market is slated to surge at a CAGR of 4% from 2022 to 2032.

Which Product Type is Most Preferred in the Chlor-Alkali Market?

This, in turn, has spurred the chlorine demand. According to Fact.MR, in the assessment period, chlorine is expected to accumulate more than 50% of the market share in the global Chlor-alkali industry.

Prominent Chlor-Alkali providers are reliant on partnerships, collaborations, acquisitions, and new software launches to stay afloat in the global market. Constant innovations to ensure a seamless client-customer relationship are the main focus of prominent market players.

What was the market worth for Chlor-Alkali in 2021?

As of 2021, Fact.MR estimated the Chlor-Alkali market to have reached US$ 84 Billion

What is the expected worth of the Chlor-Alkali industry in 2022?

What is the expected forecast CAGR for Chlor-Alkali from 2022-2032?

At what value will the market for Chlor-Alkali close in 2032?

What is the expected market value for the U.S Chlor-Alkali market?

By 2032, Fact.MR expects the U.S market for Chlor-Alkali to reach US$ 26 Billion

How opportunistic is the Chinese market for Chlor-Alkali?

China is expected to register a 4.6% CAGR in the Chlor-Alkali industry

What are the expected growth rates for the South Korean and Japanese markets?

South Korea and Japan are expected to document CAGRs worth 4.4% and 4.6% respectively in the Chlor-Alkali market

Which Product type will account for the maximum Chlor-Alkali revenue?

Chlorine-based Chlor-Alkali will be maximum, expanding at a ~5% CAGR

By Application, which category is likely to remain top-selling until 2032?

Chlor-Alkali for vinyl production will remain most preferred, expanding at a CAGR of 5.1% until 2032

Self-contained Breathing Apparatus (SCBA) Market is forecast to surpass a valuen of US$ 1.9 bn, expa...