The global phytoestrogen market has witnessed a slow growth rate at a CAGR of 2.1% over the past half-decade, and is estimated to expand at a moderate pace in future, owing to the high consumption of phytoestrogen as a dietary supplement.

Moreover, attributed to the growing pharmaceutical industry, phytoestrogen is extensively being used in drug formulation, beneficial for the treatment of chronic diseases such as cancer, osteoporosis, rheumatism, etc. In addition, phytoestrogens are commercially used as raw materials in the formulation of cosmetics for anti-ageing, acne, and others. All in all, the aforementioned factors are projected to drive the expansion of the global phytoestrogen market size at a CAGR of more than 3% through 2030.

Lignan captures a minute share of the phytoestrogen market, due to its limited application. Collective utilization of all these products in manufacturing nutraceutical and oncological drugs is set to bolster demand for phytoestrogen over the long-term forecast period.

Moreover, phytoestrogen utilisation can be observed in manufacturing cosmetics, owing to its antioxidant properties. Increasing use of personal care products and cosmetic essentials is anticipated to increase demand for phytoestrogen.

Furthermore, trade of phytoestrogen can be observed in the pharmaceutical industry for manufacturing oncological and rheumatological drugs. Its increase in healthcare and personal care usage is set to strengthen the market in developed regions such as North America and Europe over the assessed forecast period.

Europe is a dominating region that accounts for a major phytoestrogen market share among the prominent regions, owing to the positioning of key manufacturers in this region. From a demand perspective, Europe is the largest consumer of phytoestrogen-based products as compared to other regions.

Followed by Europe, North America captures around one-fifth of the market, owing to the high consumption of nutritional products in the region. The phytoestrogen markets in East Asia and South Asia & Oceania are set to grow at faster rates as compared to other regions. Latin America and the Middle East & Africa capture minute market shares due to the low prominence of phytoestrogen compounds. 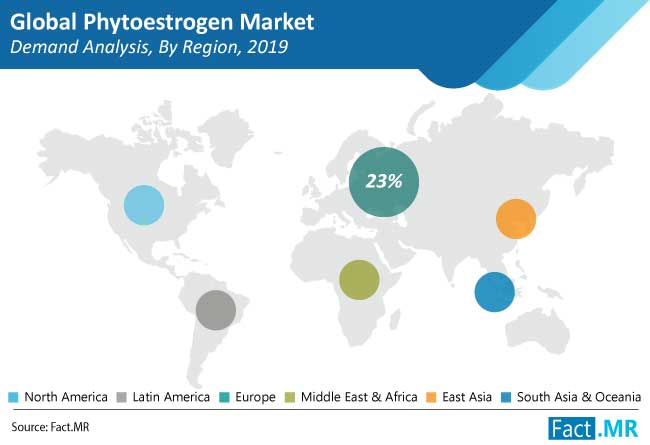 The global phytoestrogen market is consolidated in nature. Key players in the phytoestrogen market are ADM, SK bioland, Doterra, Frutarom, Natures plus, Nutragreen Biotechnology, etc. To increase their footprints, firms have been adopting inorganic activities such as mergers and acquisitions. For instance, in 2019, ADM acquired Neovia, which is a leading manufacturer of animal nutrition products in France. 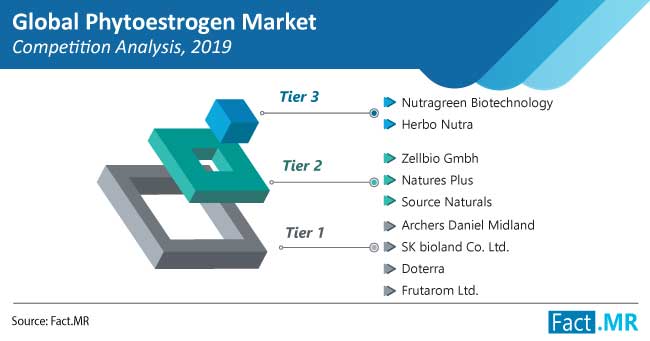 The COVID-19 pandemic has affected cosmetics and nutraceuticals production due to imposed lockdowns, creating disturbances in the demand-supply equilibrium. Plants have been shut down, declining sales volumes, and market operations have also faced serious repercussions. The coronavirus outbreak had caused a great decline in demand in the second quarter of FY2020.

“Use of phytoestrogen compounds in animal nutrition products is set to create long-term demand over the coming years.”

Phytoestrogen Market: About the Report

Fact.MR has studied the global phytoestrogen market with detailed segmentation on the basis of type, application, and region.

“This taxonomy prepared is confidential and intended exclusively for the individual or entity with whom it is being shared. Reading, disseminating, distributing, or copying this to any party other than the addressee(s) is unauthorized and prohibited.”

The global phytoestrogen market to grow at a CAGR of over 3% through 2030.

Isoflavone holds a majority of the demand mix of phytoestrogen compound due to its antioxidant nature.

Key players in the phytoestrogen market are ADM, SK bioland, Doterra, Frutarom, Natures plus and others.

*73 figures and 70 tables includes by FactMR