When compared to traditional compressor-style refrigerators, thermoelectric refrigerators, which use the Peltier technique to create a heat flux between the junctions of two different materials, perform substantially better.

This is especially true when the cooling capacity is high. Thermoelectric refrigerators are employed in a wide range of applications due to the compact size of cooling units, their quiet operation, the lack of any moving parts, gases, or liquids, and their extended lifespan.

Sales of thermoelectric refrigerators are anticipated to increase as a result of high demand from numerous applications, including medical, automotive, residential, commercial, healthcare, and more.

Global consumption of thermoelectric refrigerators is set to increase at a CAGR of 5.3% to reach US$ 1.09 billion by 2032. 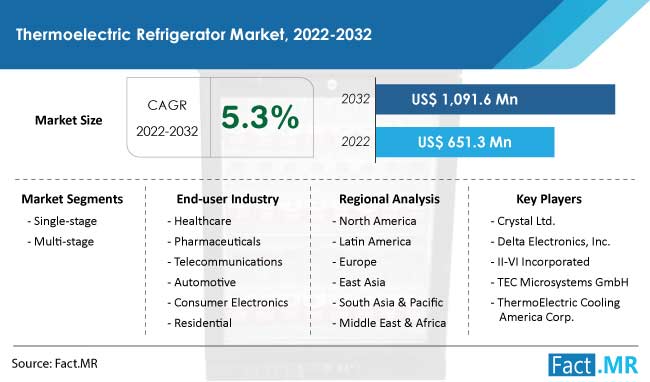 Researchers from all around the world have engaged in several R&D projects to improve the coefficient of performance (COP) of thermoelectric refrigerators.

Each of these parts is a Peltier module, with the hot side connected to a two-phase thermosyphon and a thermosyphon with natural convection on the cold side (TPM) (TSV). The electric power consumption was decreased by using a computational model to simulate and develop this thermoelectric refrigerator and by doing an experimental thermosyphon optimization phase.

What Can Benefit New Entrants in Expanding their Market Share?

Compact refrigerators with a minimum temperature of 4 degrees Celsius are based on thermoelectric refrigeration technology. However, there is potential for technology development to accelerate and be integrated into refrigerators for both, homes and supermarkets.

The thermoelectric refrigeration trend will be fuelled over the coming years by several advantages, such as:

Which Regional Markets are Profitable for Thermoelectric Refrigerator Manufacturers?

As the population in nations such as the United States and Canada possess more disposable income, North America is anticipated to account for a sizeable portion of the market.

Moreover, the region would adopt smart electrical equipment more widely due to factors such as a sizable metropolitan population base and an increase in nuclear households. Currently, North America is expected to account for 23.2% of the global market share.

Due to the launch of cutting-edge refrigeration products by well-known companies in the region, the Europe market is predicted to expand more quickly. That would draw attention to and persuade customers to buy smart refrigerators. In 2022, Europe is likely to hold 20.1% of the global market share.

The Asia Pacific market is expanding steadily due to its substantial population and household size. Strong demand for smart appliances to replace older models, increased disposable income, urbanization, and rising number of households are other important drivers for market expansion in Asia Pacific.

Major markets in the Asia Pacific for thermoelectric refrigerators are China and India. China is likely to account for 13.4% of the global market share in 2022.

How is Demand for Thermoelectric Refrigerators Evolving in Medical Science Applications?

Refrigerators are used in the medical sciences to cool samples or specimens to preserve them. These consist of various pharmaceutical or medical goods like vaccinations as well as refrigeration equipment for blood products like blood plasma.

When buying refrigerators for the aforementioned uses, dependability, and hygiene are among the top priorities. Due to issues with the transportation of these perishable pharmaceutical components, portable refrigeration solutions have been adopted, with thermoelectric refrigerators taking centre stage.

This novel idea in refrigeration makes it possible to use leftover electricity for effective cooling, which is crucial in addressing the present problems associated with the depletion of fossil fuels.

Leading businesses are investing a lot in the creation of research institutes across several locations to develop improvements to their products.

The global thermoelectric refrigerator market is valued at US$ 651.3 million.

North America is likely to hold 23.2% of the global market share.

High demand for thermoelectric refrigerators comes from the healthcare industry.

Sales of thermoelectric refrigerators are slated to increase at 7.6% CAGR.