By value, Fact.MR has projected over 7% CAGR for insole sales during 2021-2031, with market valuation reaching US$ 70 Bn in 2031. In terms of volume, demand is expected to increase at close to 6% CAGR over the same period.

Historically, from 2016 to 2020, use of insoles increased at around 2.5% CAGR, wherein, developed countries such as the U.S., Germany, Italy, and Spain held significant share in the global market.

Global expenditure on footwear and apparel has been increasing tremendously over the past few years. Central as well as Eastern European countries have spent the highest amount on clothing and footwear globally. People in the United Kingdom spend more than US$ 1,400 on an average every year on clothes as well as footwear. This increasing expenditure on the footwear has boosted the sales of the insoles.

In 2020, insoles used in therapeutic application accounted for over 12% of global market share. Increasing foot diseases among millennials such as flat foot, and severe leg and ankle pain owing to reduction in bone density, has been one of the prime reasons for such a market share in the past, and is expected to continue over the next 10 years.

Considering these statistics, the market for insoles is forecast to expand at a healthy CAGR of more than 7% through 2031, with demand for demand of foot orthotic insoles and for sports activities surging.

What are the Factors Supporting Increasing Demand for Insoles?

Increase in consumer awareness about physical fitness can be confirmed seeing growth in the sales of pedometers. Increase in physical activities such as walking and running has brought added stress on the joints of people across the globe. Higher impact on the joints during dynamic activities results in pain and ailments of the feet.

To avoid these conditions, it becomes imperative to manage the impact on the feet properly, which is the primary function of insoles. They not only keep the feet comfortable but also provide support, improve posture of the body, and provide breathability to the foot-sole by absorbing sweat around the feet.

These are key factors increasing demand for insoles in the market, and thus, depicts that market growth will be higher over the coming years.

What are the Key Strategies Followed by Prominent Insole Manufacturers?

The market has been highly competitive from the past 2 decades, and key players are involved in various organic and inorganic strategies to strengthen their market position and customer base.

To gain total control over the value chain, top manufacturers are venturing into the development and production of raw material themselves. For e.g., Euroleathers develops it insoles using leather that they themselves manufacture.

On the other side of the value chain, manufacturers are also forward-integrating by developing brand stores and increasing their supply through in-house online sales. Wiivv, for example, lets its customers order customized insoles through an app developed by the company, which can be used by customers to customize the looks of insoles and provides feet data to the fabricator.

In addition, insole manufacturers are diversifying their portfolios, as several of them have begun to enter the accessories vertical. Addition of the accessories vertical further strengthens their brand image. In this direction, insole manufacturers are developing products such as anti-fungal sprays, feet creams, odor control sprays, etc. which not only increases the life of insoles but also helps customer maintain the health status of their feet.

With an absolute dollar opportunity of around US$ 12.1 Bn, East Asia is expected to be the most lucrative market for insole manufacturers. Every 1 out of 4 insoles produced across the globe is manufactured in East Asia.

Regional players in North America and Europe are concentrating on developing insoles with advanced technologies such as 3D printing and multiple injection.

The market is filled with small and medium enterprises across all seven regions, who provide different types of insoles. Some of the biggest companies manufacturing insoles are Sidas Worldwide, Aetrex Worldwide, Dr. Scholls, Bauerfeind, Protalus, and Profoot Inc. 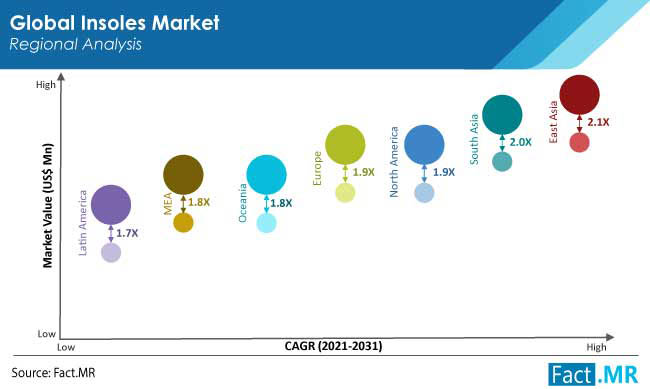 Why is the U.S. a Huge Market for Insoles?

In 2020, the U.S. accounted for over 80% share of the North American market for insoles. The country is one of the prime importers of footwear and related accessories. Sales of footwear in the U.S. are 8X of what is locally produced. Insoles for sporting activities are popular, which is likely to create strong opportunities for manufacturers in the region.

There is high presence of domestic companies in the U.S., who are primarily focusing on research & development using technologies such as 3D printing and the foot plantar pressure offloading technique.

Rise in the geriatric population shall create an opportunity for orthotic insole manufacturers over the coming years. This will be supplemented by an increase in fitness-related activities that brings stress on the feet and raise demand for supportive insoles.

Companies in the country have entered into agreements with distributors across the globe to provide their products in different regions, along with partnering with footwear brands such as New Balance and Asics to supply them with insoles for their footwear. Domestic players engaged in the manufacturing of insoles include Aetrex Worldwide Inc., Wiivv, Stable Step LLC, and Superfeet Worldwide Inc.

What Makes China a Lucrative Market for Manufacturers of Insoles?

The market in the China grew 3.8% from 2016 to 2020. Around 4 billion pairs of shoes are sold in East Asia every year, which creates propitious chances for insole manufacturers. This accounts for a consumption average of 3.8 pairs of insoles per capita.

China accounts for more than 50% of insole production in East Asia. Insoles for casual usage is one of the prominent segments in the country, which is likely to create brighter openings for manufacturers.

There are quite a number of companies in China principally focusing on the production of inexpensive insoles by investing in improving raw materials and manufacturing technology.

Companies in the country are slowly making technological advancements in insoles to meet global standards. The sheer population of the country along with increase in per capita spending capacity and awareness about the benefits of using advanced insoles will create ample prospects for insole manufacturers.

Why are Sports and Therapeutic Insoles Highly Demanded?

Demand for insoles from sports and therapeutics has been significantly increasing over the past half-decade. In 2020, both collectively accounted for more than 30% of global market share.

In sports application especially, running and heavy weight lifting are driving demand. Improvised cushioning and sweat absorption plays a part in driving the insoles business from the sports industry.

On the other hand, in the therapeutic segment, population suffering from flat feet, heel pain, ankle pain, and related issues are the chief growth contributors.

For smaller companies to develop custom-fit insoles, they need to develop feet scanning equipment and software to manufacture one insole at a time. These insoles are high in quality as they are individually manufactured, and thus create immense value for these companies.

What are the Main Features Consumers Look for While Selecting Insoles?

While choosing an insole, users give preference to comfort over price. If the insoles can provide them relief from stress and pain, consumers will not hesitate to pay a hefty amount. 3D printed insoles are the classic example of extreme comfort.

Manufacturers are vying to develop insoles that can provide better support to the feet, along with other benefits such as increased breathability and degree of absorption. Naboso Technology, for example, has developed textured insoles, which it claims can improve posture, balance, and core strength of the body through nerve stimulation from the bottom of the feet.

Several companies are targeting customers living in harsh environments to serve them with insoles that can provide comfort through mediums such as heating or cooling. Consumers living in regions with high snowfall or ice-laden mountains, such as Eastern Europe, have the option of using heated insoles that can keep their feet warm when indulging in activities such as skiing.

Insole manufacturers seek to develop products with minimum thickness while keeping the comfort provided by them constant. Thinner insoles are a win-win condition for both, consumers and manufacturers. Consumers benefit with larger space inside the footwear while manufacturers gain from savings in raw material usage.

What is the Impact of COVID-19 on the Market for Insoles?

The COVID-19 pandemic had a significant impact on the sales of insoles. The market, which was growing at around 4.2% annually, witnessed a year-on-year reduction of nearly 0.8% in 2020 with the onset of COVID-19.

With lockdowns imposed by governments and fear of COVID infection, the number of people going outdoors for work, sporting activities, etc., reduced, which, in turn, affected the sales of footwear, and reflected a similar economic curve in the market for insoles.

In Q1 2021, with the number of cases reduced and vaccination drives being held across various countries, people are resuming their outdoor activities, and thus, are contributing towards restoring the demand for insoles. The market is now in a recovery phase and is estimated to fully recover by Q1 2022. 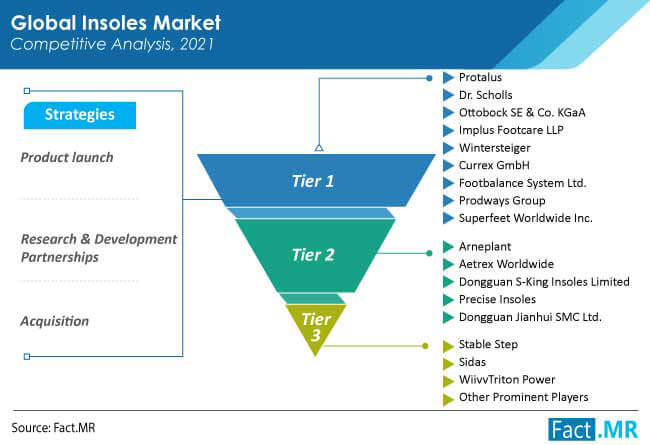 Market players have been following a blend of organic and inorganic strategies to gain position in this lucrative space. These strategies include product launches, collaborations with other players and suppliers, partnerships, acquisitions, and strengthening global supply chain networks.

Similarly, recent developments related to companies manufacturing insoles have been tracked by the team at Fact.MR, which are available in the full report.

The global insoles market is projected to garner momentum at a compound annual growth rate of more than 7% over the next 10 years.

3D printed customized insoles are gaining high popularity. These insoles are manufactured in less time and are highly erogonomic in nature.

Since the insoles market is highly fragmented, top 5 player collectively account for only 1% - 2% of the global market share.

The U.S., China, Japan, Germany, and Spain are the top 5 countries driving demand for insoles.

In 2020, North America recorded sales of more than US$ 4.2 Bn, which are anticipated to increase at 7% CAGR over the next 10 years, to capture 12% of the global share.

The insoles market in Europe is estimated to register 7% CAGR through 2031. Germany is expected to drive market growth in the region, holding 15% share.

Insole production analysis reveals that Germany, Spain, Italy, and China are key producers of insoles, due to easy raw material availability and a well-established footwear industry.

In the next 10 years, the market in Korea and Japan is estimated to expand 1.7X and 1.8X, respectively, projecting a market share of more than 25% in East Asia.