Catchy artistic films require numerous things - incredible outlining of a scene, correct situating of the human body, camera's development, and a general feeling of what makes an extraordinary arrangement, which can incorporate tones, surfaces, designs, and so on.

One thing that will make any movie producer's life simpler is a decent focal point-or a few kinds of cinema lenses. Along with computerized camera sensors (or a film camera's film stock), every focal point will give the subsequent film a specific look and detail.

Foremost objective of the report by Fact.MR on the cinema lenses market is to pitch insights on the market scenario, demand generators, technological advancements in this space, and trends for cinema lenses. The report provides a taxonomy elaborating on key segments.

The report also outlines visionary insights on the dynamics of the market, including the drivers, restraints, opportunities, trends and pricing analysis, along with key success factors.

Market trends have been tracked in 20+ high-growth countries, pointing towards countries in North America, Europe, and East Asia holding bulk of the market share and seeing positive growth indicators for cinema lenses.

Demand over the long-term forecast period can be estimated by breaking the forecast timeline into three parts.

All in all, the cinema lenses market is set to expand at a moderate rate of around 5% through 2031, providing a promising stance for investors in this space.

What are the Primary Applications that Generate Demand for Cinema Lenses?

As innovation in lenses keep on advancing at a fast speed, buyer interest for improved nature of designs, liveliness, recordings, and symbolism has additionally developed at a steady speed.

With significant progressions in camera sensors and extending utilizations of various sorts of sensors, high speed advancements are in progress across the cinema lenses space – a factor that is relied upon to assume a significant part in giving a lift to market development. 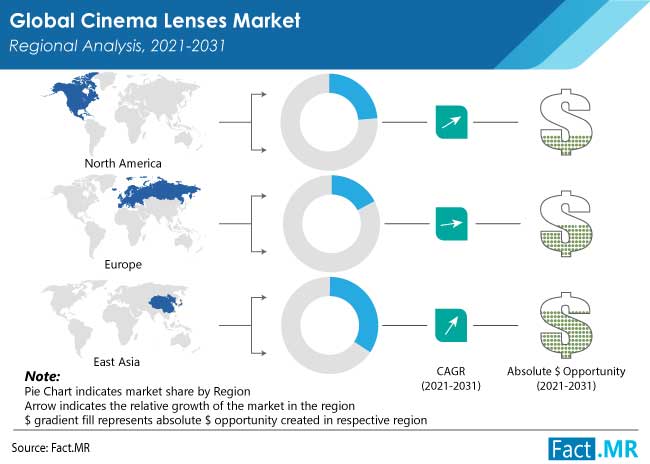 A big portion of the North American locale is ascribed to the enormous presence of unmistakable organizations such as Canon USA Inc., Adorama Camera Inc., Tamron Canada, and others in nations such as the United States and Canada.

Moreover, simple openness of cell phone gadgets among the populace in the district brings about the enormous interest for cinematic lens-based cell phones around there. As of May 2020, more than 90% of the U.S. populace used cell phone gadgets. Advanced cameras are broadly utilized by sightseers for catching different photos across landscapes.

Quicker development of the Asia Pacific market is credited to rising shopper spending for movement, which has brought about interest in advanced cinematic cameras. Also, expanding the creation pace of computerized cameras in nations, for example, China, and Japan generally uphold the development of the market in the region.

Lately, interest in full frame cinema lenses has seen an imperative development, because of which, the market has witnessed a significant lift. Interest is full frame lenses, especially for usage in APS-C cameras, is a main consideration that is projected to drive sales of cinema lenses.

How Big is the Opportunity in the Entertainment Industry?

The entertainment industry has been a key contributor to growing demand for cinema lenses. Rising interest from the entertainment world to deliver more movies because of viewer request opens new doors for film creation organizations. Creation units need to purchase new offices for their film studios to satisfy this rising need.

This will add interest for different segments of film creation units. Proficient filmmaking units require hardware, including cameras, lighting frameworks, and sound frameworks for film creation. Subsequently, expanding number of movies being created and rising quantity of film creation units are relied upon to drive cinematic camera use, and this is projected to spike demand for cinema lenses over the coming years.

How Has COVID-19 Impacted Sales of Cinema Lenses?

COVID-19 has affected all economies across the globe. It has also resulted in impacting demand for cinema lenses, due to imposition of lockdowns and demand drop from the entertainment industry, which happens to be the prime consumer of cinema lenses.

As the number of COVID-19 cases all throughout the world keeps on soaring, limitations on development, alongside tough lockdown measures, have slowed down filmmaking exercises across the world. While developments and item dispatches are required to back off in the midst of the pandemic, the market is recuperated a bit during the last quarter of 2020.

Decreased cinema projects and less shooting activities have negatively impacted the market. In addition to this, it is anticipated that, the overall film industry will rekindle its previous size by the third quarter of 2021, and so will cinema lens demand during the forecast period.

What is the Pricing Equilibrium in the Cinema Lens Space?

Cinema lens prices have been steadily increasing over the past half-decade. Key players present in regions such as East Asia and Europe are seen as major contributors to market growth.

Apart from the above-mentioned factors, foreign trade tariffs amongst powerful economies played a major governing role in deciding the global average price. Therefore, prices are expected to increase at a nominal rate over the coming years. 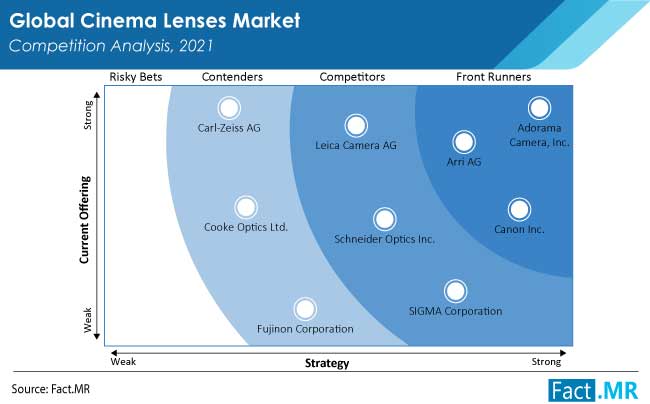 Aforementioned players in the cinema lenses industry rely on a blend of organic and inorganic strategies to deepen penetration across lucrative markets. These strategies include product launches, collaborations with key players, partnerships, acquisitions, and strengthening of regional and global distribution networks.

Similarly, recent developments related to companies manufacturing cinema lenses have been tracked by the team at Fact.MR, which is available in the full report.

How will the cinema lenses market expand until 2031?

Which country is the most prominent for cinema lenses demand?

U.S. is expected to hold a pivotal role driving demand for cinema lenses. Surge in demand from the entertainment industry is set to be observed across the country.