The global kinetic switches market has reached a valuation of US$ 449.3 million and is expected to progress rapidly at a CAGR of 10.1% to reach US$ 1.18 billion by the end of 2032.

Sales of kinetic switches accounted for around 3% share of the global switches market at the end of 2021.

Smart home gadgets such as robot vacuums, smart air purifiers, Google Assistant, and so on are becoming popular to facilitate greater control of the energy that is being used. Kinetic switches are the new buzz in the market due to the smart features involved in the product, which also makes the premise look smart.

Switches have two key functions - restoring and removing the conducting path in the circuit, and are commonly used to operate home appliances such as electric lights, equipment, electric outlets, and much more. To protect users from electric shocks, with emerging technology, these switches are becoming more advanced.

Also, wireless switches enable the installation of a device on any surface such as glass, marble, wood, and metal. Thermosetting plastic is being used for the manufacturing of switches due to its durability, which is obtained by irreversibly hardening viscous liquids.

A roadmap for kinetic switches becomes more important as there is a mass market for new and smart switches, including smart home wireless kinetic switches that can also provide enhanced safety.

From 2017 to 2021, the global market for kinetic switches registered a CAGR of 6%. Fact.MR, a market research and competitive intelligence provider, reveals that the market will exhibit higher growth at 10.1% CAGR between 2022 and 2032. 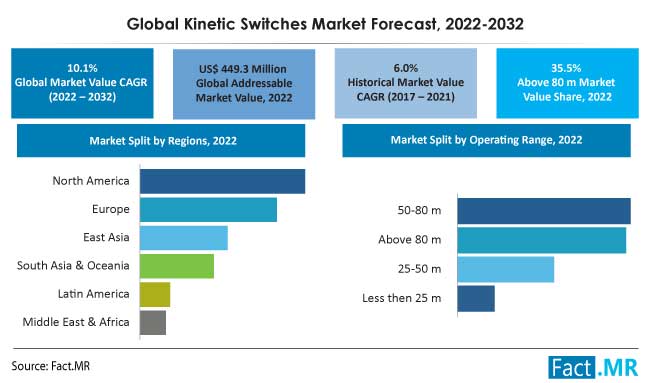 Why is Demand for Kinetic Switches Surging across Regions?

The plethora of wireless communication technologies available in the market is reducing the demand for traditional wired communication technology. As the development of smart home devices increases, more enhanced technology features such as the Internet of Things (IoT) and Artificial Intelligence are being introduced to make houses look premium.

Rapid development of data-driven decision-making is helping to improve homes and cities, which has also encouraged a more sustainable way of living with less energy waste. As per this Fact.MR study, consumers spent US$ 123 billion on IoT devices, with a lot of R&D taking place on home monitoring and safety gadgets, which are expected to enjoy a market share of approx. 22.3% by the end of 2023.

Smartphones are more computer-like with advanced services of Internet access. Earlier, smartphones only allowed one to use a calendar, calculator, social media, and other functions. Nowadays, with advancements in technology smartphones now only allow access to social media but also facilitate taking care of our houses when we are away. Mobile phones have made our lives much easier and trouble-free. The penetration of Wi-Fi has also increased due to the increased time spent online.

As per Fact.MR analysis, total smartphone users in 2021 were 6.37 billion and around 83.4% of the world population owned a smartphone. In May 2022, 58.3% of web traffic came from mobile phones. Moreover, the market has seen 2.8 billion more mobile connections than the total world population.

As such, higher penetration of smartphones and Wi-Fi in the market will lead to heightened demand for advanced kinetic switches.

What Do Kinetic Switches Manufacturers Need to Watch Out for?

The per capita income of the middle class is between US$ 11 to US$ 110 a day, and according to the World Data Lab, there are around 3.7 billion people who are under the middle-income group. China, India, and the United States are recorded in the top three rankings with the largest middle-class income group consumers.

Kinetic switches are in the introduction stage in the market, which makes the product less popular as compared to traditional switches. Due to less popularity and demand for the product, it remains expensive from the consumer end. Indeed, the substitute switches available in the market are more pocket-friendly, and many also give a luxury appearance to the interiors. Also, the installation of kinetic switches is complicated and there is less information regarding deployment in the market.

Whenever analyzing any product in the market, the United States is always on the top, and this time also, while researching on smart home appliance demand, the U.S. remains the leading market.

As per this survey analysis, 69% of United States residents have at least one smart device installed at home. On the other hand, 12% of the population owns several smart devices. It has been predicted that 15% of the population will have smart home devices installed in their homes by 2023. Convenience is the key to the significant growth of the smart home devices market, which will bode well for kinetic switch manufacturers as well.

As a result, the United States kinetic switches market is expected to reach US$ 342.4 million by 2032.

Why is the China Kinetic Switches Market Highly Lucrative?

China is one of the leading countries when it comes to digitalization, Internet penetration, and innovative technological devices. In China, over 68 million residential users have smart home appliances.

As China is a manufacturing hub, there are high chances that the sales of kinetic switches will rise in the long run. Industry 4.0 & 5.0, which entails the industrial revolution, has seen the transformation of products from analog to digital, which is the main reason driving the demand for smart equipment.

Due to China being a manufacturing hub and one of the leading countries with smart devices, it will exhibit high growth in the kinetic switches market in the long run and generate an absolute dollar opportunity of US$ 87.2 million over the 2022-2032 period.

Why is Residential End Use of Kinetic Switches So High?

As smart gadgets and IoT are becoming the norm for many households, kinetic switch demand will see significant growth in the long run due to the high usage of smart home appliances in houses. These days, consumers prefer convenience over money and advanced safety for their homes, especially in their absence.

Due to increased purchasing power and high living standards, the demand for stylish appliances with safety features is growing rapidly. Smart appliances are highly preferred by millennial consumers who are ready to spend 20% or more of their income on these products.

As a result, the residential sub-segment of the kinetic switches market is predicted to expand 2.9X by the end of 2032.

Why Do Bluetooth Devices Account for a Higher Market Pie?

According to this Fact.MR study, overall demand for Bluetooth-connected devices is slated to increase at a CAGR of 11.3% during 2022-2032.

Since 1998, Bluetooth technology has always shown tremendous demand for wireless innovation. To enhance mobility, smart gadgets are replacing traditional human-centric products for better control. Earlier, Bluetooth was used to transfer data and audio files. However, with the emergence of technology, Bluetooth has enabled the sharing of locations and connecting smart gadgets.

It has been predicted that 90% of wireless devices will be Bluetooth-enabled by 2023 and there will be approx. 3.6 billion Bluetooth-connected devices across the world. Also, industrial IoT will help manufacturers level up efficiency, productivity, and safety. Through Bluetooth-connected devices, asset tracking and management solutions will help manufacturers increase their operational efficiency.

Owing to the aforementioned factors, the market for Bluetooth kinetic switches is expected to grow more than 2.9X over the decade.

Several industry leaders in ICT are making their own strategies to stand out from other competitors in the kinetic switches market. Brands such as Enocean, Ebelong, Quinetic, Aurora, SurMountor, Hangzhou Queqi Technology Co., Ltd., Ener-J, Forum Lighting Solution, Lumenvault, Retrotouch, and Sensinovaand have started manufacturing kinetic switches to meet the high demand.

What is the global kinetic switches market worth?

The global market for kinetic switches is currently valued at US$ 449.3 million.

How is the market for kinetic switches expected to fare going forward?

During the historical years, demand for kinetic switches increased at 6% CAGR.

Which region leads the global market for kinetic switches?

Which frequency range is most preferred for kinetic switches?