Brain tumours can be treated with the minimally-invasive neurosurgical procedure known as MRI-guided laser ablation. Lasers are employed during the procedure to pinpoint and eradicate or ablate the tumour. MRI-guided ablation, as opposed to conventional open surgery (craniotomy), can lessen post-operative pain and hasten recovery.

Furthermore, glioblastoma, a critically aggressive glioma tumour that regularly recurs and can be fatal, is one of the more difficult tumours for surgeons to treat. This tumour can be managed by MRI-guided ablation. The ablation procedure might make it simpler for neurosurgeons to address some cancers that are near delicate tissues or buried deep inside the skull and difficult to access using a standard open craniotomy.

The main factors anticipated to drive the market growth are the rising prevalence of brain tumours and other nervous system-related ailments as well as the expanding use of minimal-invasive neurosurgeries.

Radiofrequency ablation operates based on disrupting the conduction of neural signals, specifically the nerve signals that carry pain. A scar tissue that blocks the nerve conduction channel is formed as a result of the heat produced by the electric current.

Fact.MR, a market research and competitive intelligence provider, offers a comparative analysis of the sales growth rates and development possibilities in the global MRI-guided neurosurgical ablation market. Regulatory approvals and innovative considerations have a significant impact on the market.

In recent years, MRI-guided minimally-invasive neurosurgery procedures have gained a lot of pace due to innovations such as the MRI intervention neurosurgical navigation platform and MRI-guided laser ablation platforms. Most of these MRI-guided systems are utilised in typical diagnostic MRI facilities.

A growing rate of MRI-guided laser ablation treatments is being carried out by clinicians nowadays as part of routine clinical practice. The demand for MRI-guided neurosurgical ablation products is expected to grow in the coming years due to the increasing use of MRI guidance in several minimally-invasive procedures for a wide range of patients.

Several governments and private organizations across the globe are launching various campaigns to raise awareness of early brain problem diagnosis and treatment.

Which Obstacles Need to Be Tackled by Manufacturers of MRI-guided Neurosurgical Ablation Systems?

Several firms are introducing advanced ablation systems but due to a lack of handling knowledge, the users are more interested in using conventional systems. Thus, the magnetic resonance imaging (MRI)-guided neurosurgical ablation market growth is predicted to be constrained by a lack of skilled and trained professionals as well as the high cost of this procedure.

On the other hand, lack of knowledge regarding the treatment procedures of brain tumours could also pose a threat to product sales growth. 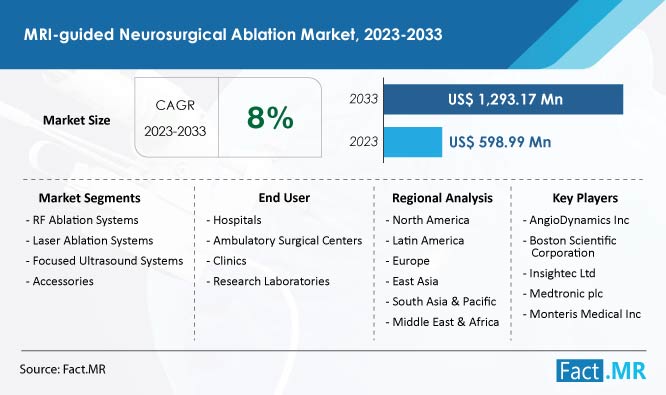 What is Supporting the United States Market in Growing Rapidly?

MRI-guided neurosurgical ablation system sales in the United States are anticipated to be boosted by the presence of major key players and their investments in this sector. The demand for MRI-guided neurosurgical ablation devices in the nation is being fueled by the introduction of cutting-edge technologies, a robust healthcare infrastructure, increasing incidences of central nervous system cancer, and the existence of highly skilled and experienced neurosurgeons.

How are Sales of MRI-guided Neurosurgical Ablation Equipment Progressing in China & Japan?

China's demand for MRI-guided neurosurgical ablation equipment is anticipated to rise at a considerable growth rate over the projection period due to the high patient population, rising healthcare costs, and increasing medical tourism. It is anticipated that the sales growth in this market will develop at a rapid pace as a result of the substantial distribution of healthcare spending for hospitals and the supply of medications to the elderly population.

The most prevalent type of brain tumour in Japan is glioblastoma (GBM), which is well known for having one of the worst prognoses of any malignancy. Thus rising cases of glioblastoma are boosting sales growth in Japan. Sales of MRI-guided neurosurgical ablation products are expected to progress at a CAGR of 4.5% from 2023 to 2023.

Which Strategies are Adopted by Manufacturers in the United Kingdom to Develop Improved RF Ablation Systems?

“Investments in R&D and Partnerships with Other Market Players”

Leading businesses and medical institutes in the United Kingdom are investing more in research and development to create cutting-edge radiofrequency ablation (RF) devices, which are anticipated to boost market growth over the projected period. To compete in the market, numerous other businesses are also hoping to enter into joint ventures and collaborations.

Why Do Hospitals Dominate the Sales of MRI-guided Neurosurgical Ablation Systems?

Hospitals are anticipated to dominate the demand for MRI-guided neurosurgical ablation systems due to the high rate of patient intake seeking brain cancer treatment. The cases of central nervous system cancer are rising, and hospitals are well-equipped to treat patients with such conditions. Thus, hospitals with all the necessary equipment and cutting-edge healthcare infrastructure are boosting the sales growth of MRI-guided neurosurgical ablation technologies.

Hospitals are more affordable, and their expert staff, which includes neurosurgeons, senior doctors, and other qualified and experienced support staff, may complete surgery faster. All of these factors encourage people to visit hospitals for advanced medical care, which raises the need for MRI-guided neurosurgical ablation devices.

Also, demand for MRI-guided neurosurgical ablation devices from ambulatory surgical centers is expected to increase at a high pace during the forecast period. This can be attributed to the fact that they offer same-day medical procedures and don't require patients to stay overnight.

To gain a competitive edge, businesses are concentrating on research and development to create technologically improved products. The main motive of key market players is to improve product quality standards.

Several companies are engaging in mergers, collaborations, and acquisitions to expand their product lines, increase their manufacturing capabilities, improve supply chain management, and offer a wider range of competitive advantages.

Currently, the global MRI-guided neurosurgical ablation market is valued at US$ 598.99 million.

Global sales of MRI-guided neurosurgical ablation systems are expected to increase at a CAGR of 8% through 2033.

Worldwide demand for MRI-guided neurosurgical ablation technologies is likely to reach US$ 1.29 billion by 2033.