A surge in atrial fibrillation cases is proving to be a growth generator as cardiac ablation technology is prominently used for its treatment. Revenue across the radiofrequency segment is expected to gather considerable momentum, anticipated to account for over 50% of global revenue.

Historically, the demand for cardiac ablation technologies witnessed stellar growth, expanding at a CAGR of 11.1%. This market growth was driven by the introduction of next-generation ablation devices, as well as the widespread use of minimally invasive techniques.

According to the latest analytical report, the global cardiac ablation technologies market is projected to expand at a CAGR of 11.8% during the forecast period from 2022 to 2032. The global cardiac ablation technologies market is anticipated to be driven by the high prevalence of cardiac diseases, improvements in the health care sector, and an upsurge in focus on research and development. Considering these factors, the market worth is estimated to surpass US$ 15 Bn by the end of 2032.

What are the Factors Driving the Demand for the Cardiac Ablation Technologies?

Rising acceptance of catheter ablation as the first line of therapy, along with recent developments introducing robotic catheter navigation systems and 3D electro anatomical mapping systems creates a highly conducive environment for the growth of the cardiac ablation technologies market.

Along with this, the mounting rate of the geriatric population in countries the U.S., most countries of Western Europe, and Japan is increasing the incidence of cardiac diseases. This is attributed to enhanced health care infrastructure, favourable reimbursement policies, and advancements in health care facilities in these countries. Moreover, access to various diagnostic and treatment services has improved in recent years, especially in developed countries.

What are the Key Market Trends & Growth Opportunities in Cardiac Ablation Technologies?

The introduction of hybrid surgical-catheter ablation helps electrophysiologists in executing heart surgeries with nominal invasion, thus reassuring patients to undergo surgeries. The adoption of robotic technologies is intended at proposing augmented safety and accuracy to the cardiac ablation procedure. For instance, advancements like balloon-mounted technologies, multi-electrode ablation catheters, and other similar developments are functioning as a boon for the growth of the cardiac ablation technology market.

Moreover, owing to a shift in the trend of patients demanding shorter hospital stays and negligible post-surgical cramps to recover as soon as possible, this segment is experiencing tremendous growth opportunities in developed countries. This has encouraged manufacturers to make consistent efforts towards utilising advanced technology to reach the internal organs through small incisions, and relatively low blood loss to achieve better recovery time.

Why North America Remains at the Forefront of Cardiac Ablation Technologies?

North America is expected to capture 37% share of the global cardiac ablation technologies market, as it consists of leading players-Johnson & Johnson, Abbott, and Boston Scientific Corporation. The easy accessibility of state-of-the-art and cutting-edge technology underpins the developmental efforts of these players, which helps them in establishing a diversified product portfolio.

Effective product positioning and advancements in technology help these players in generating revenue from other regions. For instance, Broward Health Medical Centre is establishing a robotic electrophysiology (EP) program to expand access to advanced minimally-invasive treatment of heart rhythm disorders in Florida.

Besides efforts put in by these leading players, demand for cardiac ablation systems is substantially high in the U.S due to a huge number of patients suffering from heart conditions. Numerous studies have found that cardiac arrest is the leading cause of death in the U.S. This makes the country a key cardiac ablation technologies market, which, in turn, is attributing a pole position to North America.

How is Asia Pacific Performing in the Cardiac Ablation Technologies Industry?

Inexpensive Manufacturing Costs Encouraging Companies to Invest in the Region

Asia Pacific is anticipated to cultivate at a rapid pace throughout the forecast period, due to ever-increasing cases of atrial fibrillation and an upsurge in health care expenditure across the region. Substantial investments from prominent players in the region owing to cheaper manufacturing in India and China will further assist in escalating the growth rate of the cardiac ablation technology market.

The region offered significant growth prospects for the ablation technology market. Backed by the swelling incidence and prevalence of cancer and cardiac conditions, technological advancement in ablation products and technology, the market is likely to prosper during the forecast period, accumulating a market share of almost 40% through 2032. 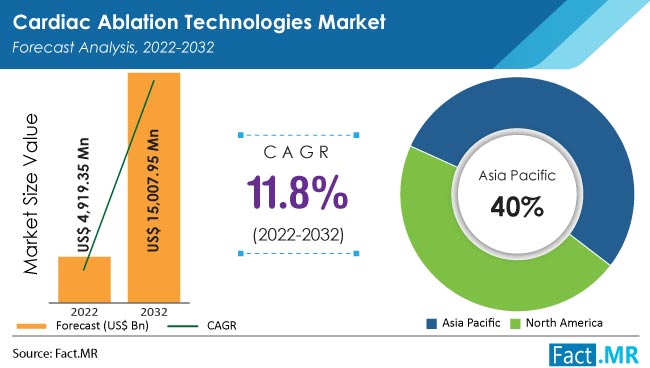 Why Radiofrequency is Most Preferred in Overall Cardiac Ablation Technologies?

Adoption of radiofrequency is expected to add a significant revenue share of around 55% to the cardiac ablation technologies market by 2032, while laser technology would witness the highest adoption rate, considering its high precision rate and superior outcomes.

After numerous successful trials of cryoablation, also recognized as cryotherapy, have been done on patients suffering from breast cancer in the US, Japan and European countries. The results have been affirmative. Moreover, the US Food and Drug Administration has already cleared the technique for treating kidney, liver and other cancerous body parts. Lately, Taiwan and Russia have also approved the technique.

Recent advancements in cryotherapy treatment using cold temperatures have made it feasible to treat early-stage cancers but with certain limitations that it can work only on the early-stage breast or cervical cancer. Moreover, this therapy modality cannot be directed to all early cancer patients because of the high possibility of failure if the patient selection is not right.

According to fact.MR, the cardiac ablation technologies industry is projected to grow at a CAGR of 11.8% to surpass US$ 15 Bn by 2032.

The radiofrequency segment of is the fastest-growing segment in the market, likely to account for 50% of total revenue

*76 figures and 26 tables includes by FactMR