The global n-butyllithium market is expected to hold a valuation of US$ 277.6 million and a growth rate of 5.4% by end of the forecast period.

N-butyllithium is an organolithium compound used in synthetic chemistry. It is often used as a reaction initiator compound in the polymerization of an elastic polymer.

N-butyllithium’s chemical properties disintegrate when dissolved in water. It is often transparent to the pale yellow liquid solution with specific solubility in alkane solutions. N-butyllithium is considered a strength-based and widely used as a deprotonating agent in the laboratory as well as the chemical industry.

Demand for n-butyllithium is mainly from polymer manufacturing companies as it is utilized as an initiator for the polymerization of styrenic thermoplastics elastomers. Additionally, it is also utilized in the metalation process. The chemical has been aggressively used in the manufacturing of agrochemicals and pharmaceuticals production. Owing to the requirement for improved soil and crop conditions, the demand for agrochemicals is rising.

N-butyllithium demand is escalating due to the increasing consumption of industrial chemicals in various end-use industries such as the energy sector. The chemical is used for the synthesis of aldehydes and ketones which are highly demanded chemicals in the energy sector. Rising concerns regarding energy demand and supply gap majorly due to the Russia-Ukraine invasion, the energy requirements of European countries are unable to meet which creates the demand for the production of batteries and energy storage equipment. Thus, the demand for n-butyllithium is anticipated to grow in forthcoming years.

With surging utilization of n-butyllithium in the chemical industry, the global market would generate revenue of US$ 277.6 million by 2033 end, growing at a CAGR of 5.4%.

The historical analysis of the global n-butyllithium market indicates market growth rate was 3.0% from 2018-2022 and is further expected to grow by 5.4% between 2023 and 2033, according to Fact.MR analysis 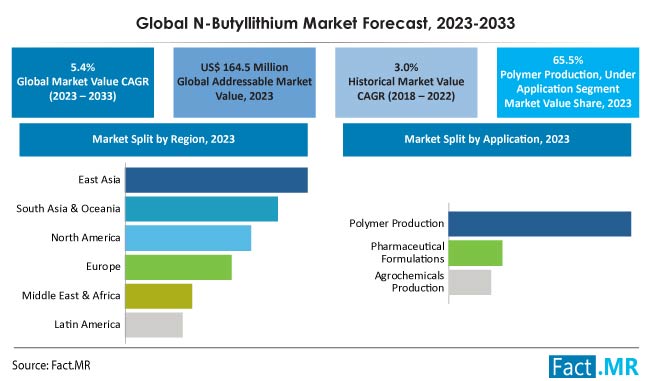 The above image depicts the overall market share analysis of the n-butyllithium market based on region and application. Under the application segment, polymer production dominates with a 65.5% market share in 2023.

N-Butyllithium is a major component in the production of SBS poly (styrene-butadiene-styrene), a thermoplastic elastomer used in the manufacturing of shoe soles, and tire treads. The SBS functions like hard rubber without the formation of cross-link bonds and provides durability to the polymers. While on the contrary, conventional rubber is hard in nature but due to crosslinking, reshaping is quite tough.

Therefore, increasing the consumption of polymers would generate more demand for n-butyllithium for further processing.

The market for n-butyllithium is expected to be stimulated by an increase in demand for intermediate chemical feedstock further required in product development. Also, n-butyllithium is used in metal workings for the metalation process.

N-butyllithium manufacturing and use have a negative influence on the environment. If it is dumped into the water stream, it has a negative impact on the situation. Additionally, exposure to chemicals by humans is quite harmful. Upon continuous exposure, it would irritate the eyes, create illness metastasis, and eventually lead to cancer.

Additionally, n-butyllithium is highly pyrophoric in nature. It easily ignites in the air or below 540 degrees C, thus it is hazardous in nature if not stored properly. Furthermore, the production process releases gaseous by-products that increase the concentration of harmful gas in the atmosphere. Therefore, the discovery of alternatives for n-butyllithium is being carried out so as to limit the emission into the environment. This, in turn, hampers the growth of the market

“China being the majority N-Butyllithium consumer”

The market in China is expected to witness robust growth during the forecast period. China accounts for global 32.0% of polymer production. China outlays a global platform for China holds a substantial share in battery production that requires n-butyllithium as intermediate feedstock. Thus, the demand for n-butyllithium is maximum in China.

China’s utilization of n-butyllithium generated revenue of over US$ 34.7 million in 2022 and holds approximately 24.0% of the global market share.

The US holds the second position in the global chemical market after China. The country’s rapidly advancing scenario demands increased production of n-butyllithium for further utilization in batteries production, pharmaceutical formulations, and others.

The usage of n-butyllithium in the US market generates revenue of US$ 23.9 million in 2022 and the market is expected to inflate by 4.7% by the end of the forecast period.

How n-butyllithium used in polymer production dominates the market?

N-butyllithium is widely used as an initiator compound in the polymerization of thermoplastics. It majorly uses the production of SBS that is further processed for the manufacturing of rubber soles, and tire treads. Owing to the increased production of automobiles, the requirement for tire tread will eventually increase the demand for n-butyllithium for SBS production.

The consumption of n-butyllithium in polymer production is anticipated to propel at a growth rate of 5.3% by end of the forecast period.

How much revenue is generated from the utilization of n-butyllithium pharmaceuticals formulations?

The top n-butyllithium producers in the world use price optimization strategies. As many mid-scale players from China and other Asian countries have already attracted significant consumers by offering them items at a variety of low prices, key suppliers are aiming to strengthen their market position. Additionally, producers are concentrating on the creation of industrial techniques that reduce energy emissions into the atmosphere.

Fact.MR has provided detailed information about the price points of key manufacturers of n-butyllithium positioned across regions, sales growth, production capacity, and speculative technological expansion, in the recently published report.

Segmentation of the N-Butyllithium Market

Worldwide demand for the n-butyllithium market is anticipated to grow at a CAGR of 5.4% by 2033

East Asia accounts for a maximum share of 26.4% in the global n-butyllithium market.

Polymer production accounts for a 65.6% share of global sales of n-butyllithium.

*54 figures and 56 tables includes by FactMR