The U.S. is expected to account for more than 25% share of the global oral thin films (OTF) market by 2032.

The oral route is the most preferred method for administering therapeutic drugs because it is simple to use, has a cheap cost of therapy, and has a high rate of patient compliance. Tablets and capsules are the most widely used oral solid dose forms. Geriatric, paediatric, and bedridden patients, however, have trouble swallowing typical oral dosage forms.

Since they effectively overcame this obstacle, oral fast dissolving films or oral thin films (OTFs) have gained widespread acceptance. However, this rapid acquiescence of oral thin films is restricted geographically, depicting a global compound annual growth rate of 6.1% during the historical period of 2017 to 2021.

Rapid drug action is delivered through oral disintegrating film, which dissolves the medication in the buccal cavity. Since a decade ago, oral thin films have gained commercial significance in both generic and non-generic markets, positioning them as a global business resource. The industrialization and commercialization of the product are discovered to be related to recent research in this area.

Additionally, oral mucosa drug administration holds promise for achieving a quick start of action or increased bioavailability for medications with high first pass metabolism. To let a rapidly dissolving medicine get absorbed directly into the systemic circulation through the oral mucosa, there is growing interest in creating the orally fast disintegrating strip.

Fact.MR says that the global oral thin films market will be valued at US$ 7.19 billion by 2032-end, expanding at a high CAGR of 8.7% over the next ten years.

Between 2017 and 2021, the global market for oral thin films expanded at a CAGR of 6.1%, and as per the latest study by Fact.MR, a market research and competitive intelligence provider, sales are projected to surge at 8.7% CAGR through 2032. 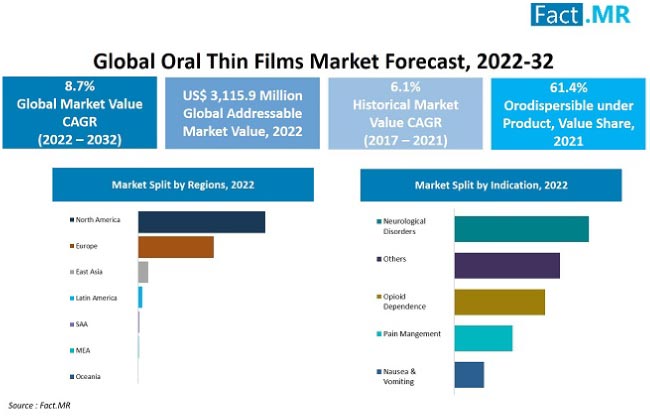 Market share analysis of oral thin films based on indication and region. Under the product segment, orodispersible films lead with 61.4% market share in 2021.

Why is the Popularity of Oral Thin Films Rising Rapidly?

OTFs bypass the GI tract since they are absorbed directly into systemic circulation through the mouth cavity. This bypass results in a few significant advantages. The foremost advantage of bypassing the GI tract is that it does away with many of the typical side effects of other orally delivered medications, which frequently accompany pills or chewable tablets. Although many patients experience gastrointestinal distress after taking medications, OTFs are unlikely to contribute to this problem because they are never eaten.

OTFs can also be considered a form of "precision medicine," with perforations in a single film that provide accurate and flexible dosing. OTFs may be appealing to adults who need to take partial doses of medication because of their dosing flexibility. While paediatric applications benefit from this because children need smaller and more variable dosages than adults, OTFs also work well for other applications.

OTF utility as a drug delivery platform has increased by the ability to incorporate even poorly soluble medicines into them; however, their main benefit is that they are very patient-friendly. The substantially greater surface area of OTFs compared to conventional drug delivery techniques allows for quicker wetting, disintegration, and dissolution.

For the administration of films, saliva is sufficient to diffuse or spread a medication load; no water, chewing, or swallowing is required. To appeal to young children, OTFs can also be made to have a pleasing color and flavor. Furthermore, these films are simple to handle and transport.

OTFs can be produced quickly due to their final form, and producers now can do so around-the-clock thanks to the advancements in solvent-free, aqueous-based, powderless film manufacturing. This method is quicker and only requires two steps: mixing and casting.

In contrast, making tablets and capsules is a much more involved operation. Drugs with expiring patents are also excellent candidates to be reformulated for OTF delivery because doing so would grant them an extra three years of market exclusivity if a unique oral film application were to be approved.

“Newness of OTFs is the Real Challenge”

As a novel and developing mode of drug delivery, OTFs come with associated challenges. OTFs are only recently beginning to incorporate medications that are not water-soluble. Components to aid a drug's dissolution may be included in tablets and capsules. OTFs, on the other hand, use mostly polymers to increase a drug's solubility and are a more efficient drug delivery mechanism.

To boost the solubility of medications that are insoluble in water in OTFs and so increase the functionality of OTF technology, scientists are investigating possible new particle engineering techniques. The fact that OTFs can only transport a tiny medication load of 10 to 20 mg is another restriction on their ability to operate.

An OTF is additionally more susceptible to humidity and temperature because of its bigger surface area. However, increased adoption of OTFs is expected to address these challenges eventually.

How is OTF Adoption in the U.S. Being Influenced by Protection of Pharmaceutical Business Interests?

Oral thin films have been constantly in high demand in the United States, mostly for the treatment of illnesses like schizophrenia, ALS, and opioid addiction. Additionally, many more are being developed to address long-term illnesses like migraine and Alzheimer's disease. The Food and Drug Administration has currently given its approval to more than 11 oral film products.

Furthermore, OTFs have shown to be a very effective way for important pharmaceutical businesses to safeguard their products when they lose their patent protection. With patent protection of up to 20 years, novel oral film applications of reformulated medications, for example, can obtain a supplementary 3 years of market exclusivity which can be extended up to 7 years in the event of an orphan drug candidate from the FDA.

How will Germany Create New Growth Opportunities for OTF Manufacturers?

With rising advancements in the use of nanotechnology-based medicine to achieve extremely precise treatment for many chronic and infectious ailments, the German market is positioned to open up new growth horizons for OTFs.

In the long run, these measures are anticipated to greatly increase the manufacturing possibilities for oral thin films in Germany.

Why are OTFs Most Widely Used for Neurological Disorders?

Oral thin films are being used extensively to treat a range of neurological illnesses, including schizophrenia and Alzheimer's disease. A majority of these patients-4 out of 5-prefer orally disintegrating dosage forms to traditional solid oral dosage forms.

In addition to choking worries and respiratory cycle disturbance, people with neurological diseases and central nervous system disorders have trouble chewing or swallowing solid drugs. Oral thin films are consequently growing in popularity. Medical professionals highly favor these films as routes of administration because of their quick hydration and disintegration rates.

At what rate is the OTF market expected to expand?

Worldwide demand for oral thin films is anticipated to increase at 8.7% CAGR and reach US$ 7.19 billion by 2032.

What is the size of the global oral thin films market?

How did the oral thin films market fare over the past four years?

How much share does North America hold in the global market?

Metallized Films Market is anticipated to increase at a CAGR of 4.3% and reach a valuation of US$ 3....

The global paint protection films market is projected to expand at a CAGR of ~5% throughout the fore...