The global intraoral scanners market is valued at US$ 505.6 million in 2022 and is predicted to increase at a high-value CAGR of 7.5% to reach US$ 1.04 billion by the end of 2032, says Fact.MR, a market research and competitive intelligence provider.

In dental clinics, intraoral scanners in digital dentistry have grown in popularity. This is due to the benefits of digital processes for illness diagnosis in everyday clinical practice. With the development of electronic health records, cloud storage of data, and advanced dental equipment, dental clinics display a stronger adoption of digital dental dentistry and dental radiology equipment than other end users.

This is due to the software-based products' capacity to be adapted into all spheres of medical practice. Thus, as a large number of patients are visiting dental clinics for tooth and gum discomfort, over the projected period, the sales of dental intraoral scanners are anticipated to rise.

Dental intraoral scanners are equipment used in dentistry to take direct digital imprints. A laser beam is focused onto the tooth area, which must be watched, similar to other scanning equipment. Implant scan bodies, prepared teeth, and tooth arches are all scanned using intraoral scanners. The difficulties with impression plates and trays used in conventional scanners have been greatly reduced by intraoral scanners.

Trays used during scanning also cause older patients some slight discomfort. Patients appreciate 3D digitalization imprints because they are more practical and comfortable. In less than 3 minutes, modern intraoral scanners can scan the complete dental arch due to technological developments. Thus, the demand for 3D intraoral scanners is growing.

Root caries is more common in older people due to increased difficulties with receding gums that expose tooth root surfaces and excessive medication use that results in xerostomia. Thus, the rising rate of the senior population with dental disorders is expected to boost the sales of intraoral scanners.

Intraoral cameras are useful for accessing the back of the mouth since they may be used inside the mouth and provide exceptional sight and clarity. Intraoral cameras provide a strong light source that allows for high magnification of objects.

Over the coming years, there will be a significant rise in the demand for intraoral cameras due to the advantages of taking direct dental impressions, reducing the frequency of restorative remakes, and supporting better clinical workflows. Furthermore, factors influencing the sales of intraoral scanners are the growing rate of population with dental disorders, the rising prevalence of periodontal diseases, and technological advancements in intraoral scanners.

What is Supporting the Sales of Intraoral Scanners across the World?

Edentulism is a disorder that causes tooth loss and is usually observed in the elderly population around the world. Periodontal disease, dental caries, an unhealthy lifestyle, and population ageing are the causes of edentulism.

Since tooth loss or decay is so common in nature, more people seek dental care, which is anticipated to fuel the intraoral scanners market share during the projected period.

Therefore, the worldwide demand for intraoral scanners is boosting due to the rising rate of the ageing population with dental problems.

Due to improvements in dental diagnostic imaging technologies, there is likely to be an increase in the sales of 3D dental scanners. The dentistry industry is expanding quickly due to the rise in data and technological advancements as an efficient range of digital leveraging.

What Could Dent Demand Growth for Intraoral Scanners to Some Extent?

The cost of dental intraoral scanners starts from USD 20,000 and increases accordingly. The cost is expected to rise in the coming years due to ongoing technological improvements.

People in many underdeveloped nations frequently ignore dental issues due to a lack of money and awareness regarding oral care. Thus, such an approach negatively hampers the sales of dental devices.

Furthermore, the shortage of experienced medical experts in developing nations and the high price of intraoral scanners could limit sales growth. 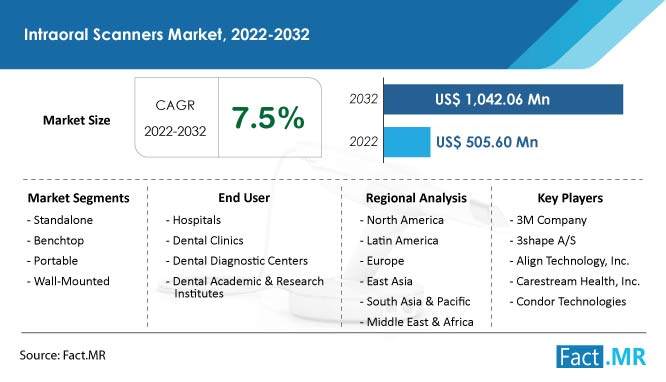 How are Sales of Intraoral Scanners Evolving in the United States?

With a high growth rate, the United States is expected to dominate the North American market. The main factors boosting the U.S. intraoral scanners market growth are an increase in the senior population with oral ailments and the presence of sophisticated healthcare infrastructure.

Thus, sales of intraoral scanners are anticipated to increase as the incidence of dental problems rises.

Major market players in the nation are introducing new and sophisticated scanners as a result of technological developments, which are anticipated to have a big impact on the sales of intraoral dental scanners in the nation.

Why is Demand for intraoral Scanners High in European Countries?

Demand for intraoral scanners is currently increasing in European nations such as Germany, the United Kingdom, and Spain, and is anticipated to remain the same throughout the forecast period due to the continuing trend of preventive healthcare, growing emphasis on digital dental technology products, availability of advanced medical products and services across countries, and rise in cases of chronic dental diseases.

In addition, the market has benefited from the innovative intraoral scanners that have been introduced in the past two years, which have contributed to the industry's high growth rate.

Sales of intraoral scanners are increasing in Asian nations such as China, Japan, India, and South Korea as a result of factors such as rising medical tourism, rising healthcare spending, rising demand for 3D scans for dental implants, and accessibility to cutting-edge healthcare facilities with trained health professionals.

The market in the Asia Pacific region is growing as a result of increased research and development efforts in dental diagnostic equipment by major firms, a rise in oral illnesses, and supportive assistance for oral healthcare by governments and non-government organizations of the respective countries in the region.

Which Type of Intraoral Scanner is Highly Popular?

Standalone intraoral scanner sales are predicted to increase at a healthy growth rate during the forecast period due to their enhanced workflow during oral scanning operations and improved results.

Furthermore, with the development of compact portable intraoral scanners, the scanning of the buccal surface has become considerably simpler, faster, and more efficient. Therefore, it is anticipated that the improved output provided by these devices will accelerate sales growth.

People are affected by oral diseases throughout their lifetime and chronic dental disorders can result in pain, suffering, physical deformity, and even death. For many countries, dental disorders represent a considerable health burden.

Due to the increasing need for scanners, several medical device manufacturing companies are making high investments in this industry. Also, rising worldwide dental restorative procedures for diagnosing and treating the problems associated with teeth and jaws that occurred due to several reasons are expected to generate new opportunities in the intraoral scanners market.

Worldwide intraoral scanner sales are predicted to reach US$ 1.04 billion by 2032.

A portable instrument called an intraoral scanner is used to directly record digital impressions of the oral cavity.