Presently, the global polymethyl methacrylate (PMMA) market stands at US$ 4.9 billion and is projected to surpass a valuation of US$ 8.5 billion by the end of 2032, with worldwide demand for PMMA forecasted to increase steadily at a CAGR of 5.9% over the next ten years.

Polymethyl methacrylate is a clear plastic that is mostly used as a substitute for glass owing to its superior characteristics such as better durability, affordable production, scratch resistance, UV light protection, and simple manufacturing as compared to glass.

PMMA is widely used for making signs & displays as it acts as a clear glass but is cheaper and more durable, which reduces the overall product cost and improves its durability without compromising functionality.

Extensive use of polymethyl methacrylate in the automotive industry, growing adoption in construction applications, rapid urbanization & industrialization, high demand for consumer electronics, growing demand for recyclable transparent plastics, and growing demand for electric vehicles are some of the prominent factors that are anticipated to propel market growth over the coming years.

On the contrary, the availability of several alternatives to PMMA, its detrimental impact on the environment, and difficulties in the recycling of acrylic materials are some dynamics that are anticipated to have a constraining effect on the overall PMMA demand in the future.

The most lucrative polymethyl methacrylate (PMMA) regional market is expected to be Asia Pacific owing to robust industrial and manufacturing activities in this region. Other prospects such as supportive government initiatives, rising automotive production, and the presence of key companies in the PMMA market in this region are also expected to drive market potential throughout the forecast period.

China, Japan, Korea, and India are estimated to be the most lucrative markets in this region. Shipments of polymethyl methacrylate in China are projected to rise at a 7.5% CAGR over the next ten years to account for an approximate sales revenue of US$ 2 billion by the end of 2032.

A more comprehensive and detailed account of all the factors governing global market growth has been listed in this brand-new polymethyl methacrylate research study by skilled analysts at Fact.MR, a market research and competitive intelligence provider.

How are Start-ups Writing a New Future for the PMMA Industry?

New entrants in the market are offering novel products and solutions that set them apart from other market players in the global landscape in hopes of acquiring a substantial market share. Some new companies are also taking steps to expand their business potential by increasing production capacity.

Research and development activity across the world has increased substantially in recent years and this has also resulted in new findings for many chemicals and materials. These new research studies and findings could help start-ups to create innovative products and solutions that could help them establish themselves in the global marketplace. 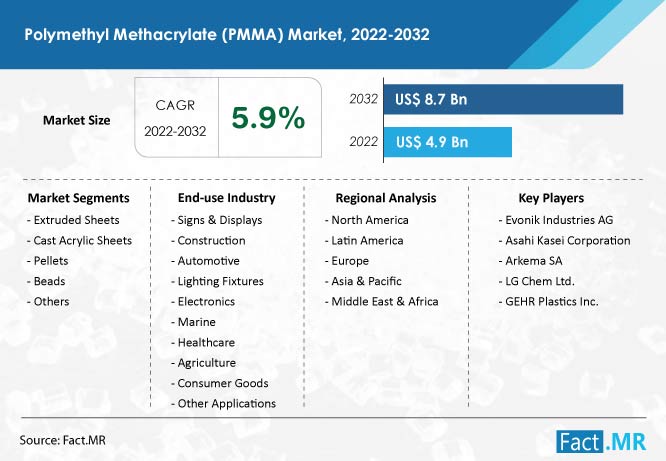 Which is the Most Prominent PMMA Market in North America?

Demand for polymethyl methacrylate in the United States is expected to mostly come from the optical and plastic manufacturing industries and this trend is expected to be rife over the next ten years as well. Other prospects such as increasing automotive production, growing use of PMMA composites in construction applications, high investments in research and development of new materials, and growing demand for eco-friendly materials are also expected to shape the market growth trajectory in the U.S.

At present, sales of polymethyl methacrylate in the United States account for a valuation of US$ 700 million.

Japan is known to be one of the most technologically advanced countries in the world since it has been home to some of the most prominent names in the electronics and technology industries.

What Bankable Opportunities Does South Korea Have to Offer?

The presence of key players in the PMMA market in Korea such as LG Chem Ltd., Lotte Chemical Corporation, Kolon Industries Inc., etc., is expected to provide highly attractive remunerative opportunities for market growth over the coming years.

Moreover, increasing demand for polymethyl methacrylate from the flourishing automotive manufacturing in the country and the presence of key automotive companies such as Kia, Hyundai, etc., are also expected to boost market growth in the future.

Why is Germany the Prime Target of PMMA Suppliers in Europe?

German automotive manufacturers are known all across the world and Germany is one of the most important automotive markets in the world, which makes it a highly attractive market for polymethyl methacrylate owing to its characteristic properties which are in alignment with the requirements of automotive companies. Increasing demand for lightweight and durable automotive components is expected to drive market potential in Germany over the coming years.

Which Form of PMMA is Highly Preferred Over Others?

Based on application, the market for polymethyl methacrylate is segmented into extruded sheets, beads, pellets, cast acrylic sheets, and others.

Demand for extruded sheets accounts for a dominant market share of over 50% in 2022 and the demand is expected to maintain a similar demand outlook over the coming years as well. The excellent properties of PMMA extruded sheets such as lustrous finish, excellent weather resistance, and better optical purity make them a preferred choice for many industries and are expected to drive their demand going forward.

Moreover, increasing demand for such sheets across several industry verticals is expected to further bolster their market share through 2032. Extruded sheet sales are projected to account for a revenue valuation of US$ 3.7 billion by 2032-end.

Prime polymethyl methacrylate manufacturers and suppliers are expected to adopt strategies that would help them increase their market share and drive revenue generation capacity. Companies are also expected to eye mergers and acquisitions to strengthen their stance and gain a competitive advantage over other market players.

Worldwide sales of polymethyl methacrylate in 2022 are valued at US$ 4.9 billion.

Asia Pacific is anticipated to be the largest polymethyl methacrylate (PMMA) regional market.

Growing demand from the electronics and automotive industries is a prime driver for market growth.