The global pressure guidewires market is valued at US$ 750.3 million in 2022. Worldwide demand for pressure guidewires is expected to increase rapidly at a CAGR of 9% from 2022 to 2032 and reach a market valuation of US$ 1.7 billion by the end of 2032, says Fact.MR, a market research and competitive intelligence provider.

Pressure guidewires relate to diagnostic medical devices which are employed in percutaneous coronary intervention (PCI) treatments to diagnose arteries and vessels of the patient, whether there is a need for any surgical procedures.

The system utilizes fractional flow reserve technology (FFR) for detecting the blockages existing in the vessels. Because of their adaptable structure and support, they are specifically created to assist in the delivery of gadgets.

With the help of HeartFlow's non-invasive cardiac computed tomography-derived fractional flow reserve technology, a patient's whole coronary tree can be evaluated using virtual fractional flow reserve values with just one computed tomography scan. This data aids medical professionals in deciding whether to refer a patient with chest pain to the cardiac catheterization lab for revascularization or if a therapeutic option is more appropriate.

To access vascular targets with greater precision and accuracy, a guidewire is widely employed. A guidewire is a tool used to enhance the accuracy of both surgical and diagnostic procedures. It is mostly applied to gastrointestinal, cardiovascular, and interventional radiology applications.

A surgeon can diagnose and treat diseases and missing anatomical structures due to the device's advanced features such as tip, stiffness, coating, and shape. Furthermore, guidewire's incorporation of cutting-edge technologies, which includes steerable vision, can enhance procedural outcomes.

Recent years have seen a rapid advancement in the technologies needed to create upgraded guidewires that enhance functional performance. Manufacturers engaged in the development of advanced guidewires are also concentrating on the material choice and configuration design, to produce more user-friendly, minimally-invasive equipment that could fulfil the application requirements of healthcare professionals, which is also expected to speed up the sales growth of pressure guidewires market during the forecast period.

One of the current trends in the pressure guidewires market is the rising number of patients with chronic diseases and the growing desire for minimally-invasive procedures due to shorter hospital stays and cost-effective solutions.

One of the key factors propelling the growth of the pressure guidewires market is the rising prevalence of cardiovascular diseases (CVDs) in both men and women around the world. Pressure guidewires are being used at a higher rate as a result of the increased risk of acute coronary syndrome and the rising number of older persons who are more vulnerable to cardiovascular diseases.

Pressure guidewires are becoming more popular because of their ease of connecting, direct and dependable FFR signal recovery for permitting precision, and zero drift performance, as well as the growing emphasis on decreasing surgical procedures to improve healthcare quality and patient comfort.

Demand for pressure guidewires is also positively influenced by the improving healthcare facilities across the globe and rising spending power on healthcare. Furthermore, throughout the projection period, technological breakthroughs are expected to generate new opportunities in the pressure guidewires market.

Healthcare experts are looking more and more for alternative treatments that can provide patients with illnesses, such as cardiovascular diseases, urological disorders, and cancer diseases, with safer and more effective disease management strategies. Medical professionals are selecting minimally-invasive surgeries more often than traditional open surgeries as a result of the clinical advantages it offers.

As a result, it is anticipated that the demand for pressure guidewires would increase as the aged population's CVD rate rises. Also, the ageing population is more susceptible to infections and a range of chronic diseases due to lowered immunity, which increases the risk of complications.

Therefore, it is projected that the increasing rate of the older population would probably have a positive impact on sales of pressure guidewires throughout the projected period.

Which Factors Can Limit Sales Growth of Pressure Guidewires?

Cardiovascular arrhythmias, variations in the heartbeat's conduction, and guidewire failure in the vascular system are additional issues related to guidewires. Death is very likely as a result of these grave consequences. The use of pressure guidewires in treatment may thus be discouraged in several potential patients as a result of such factors. 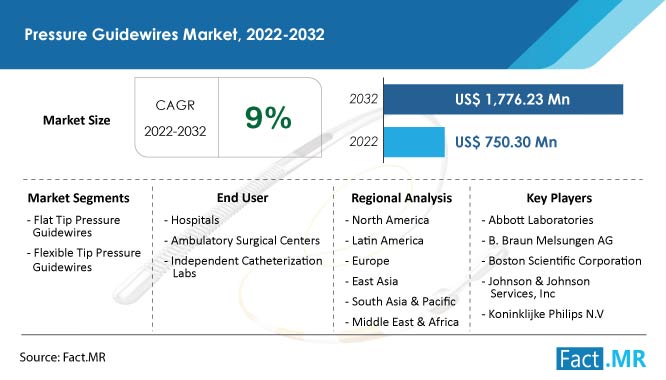 Why is Demand for Pressure Guidewires Increasing in the United States?

The rise in the elderly population in the U.S. has a direct impact on the demand for pressure guidewires. This is mostly caused by the elevated risk of cardiovascular disorders in the elderly.

Therefore, a steady rise in the geriatric population can be concluded as a key reason positively influencing demand for pressure guidewires in the U.S.

The existence of leading market players such as AngioDynamics, Abbott Laboratories, Boston Scientific Corporation, and Cardinal Health is another factor influencing sales growth.

Which Factors are Driving Sales of Pressure Guidewires in Asia Pacific Countries?

Demand for pressure guidewires in the Asia Pacific countries is expected to increase at a healthy growth rate. Asia Pacific countries such as China, India, Japan, and South Korea are experiencing high growth in the senior population with chronic diseases. CVDs, cancer, and cerebrovascular diseases are the main causes of mortality in China.

Rising prevalence of urological disorders such as urinary tract infections, kidney stones, and more in Asia Pacific countries is expected to increase demand for urological guidewires.

Sales of pressure guidewires in China and Japan are predicted to progress at CAGRs of 8% each respectively in both countries during the forecast period.

Since French surgeons are recognised globally for their expertise in minimally-invasive treatments, France has built training facilities for these operations.

Guidewires are used as safety precautions in minimally-invasive cardiac procedures. Some of the key factors driving sales growth in this industry include the employment of technologically advanced utilities for the treatment of target illnesses and supportive government policies. Some of the biggest businesses that compete in the European market include B. Braun Melsungen AG and Biotronik.

Why are Pressure Guidewires Highly Demanded by Hospitals?

Demand for pressure guidewires from hospitals is comparatively higher than other end users. This can be attributed to rising gastrointestinal disorders and cardiovascular diseases, hospitals with advanced technologies aid in treating such illnesses quickly and effectively.

Hospitals have a high potential on spending more on advanced medical equipment such as guidewires. Thus, effective treatment assurance and the presence of advanced healthcare settings attract target patients, which subsequently increases sales of pressure guidewires.

The global pressure guidewires market is valued at US$ 750.3 million in 2022.

Global sales of pressure guidewires are expected to increase at 9% CAGR during the next 10 years.

Demand for pressure guidewires is predicted to attain a market valuation of US$ 1.7 billion by 2032.

Sales of flexible tip pressure guidewires are predicted to rise 10% CAGR during the forecast period.

Hospitals will continue to dominate global sales of pressure guidewires over the decade.