Worldwide sales of stretcher chairs are anticipated to increase at a CAGR of 4.4% from 2022 to 2027. The global stretcher chairs market is currently valued at US$ 225.9 million and is estimated to reach a size of US$ 281 million by the end of 2027.

Increasing prevalence of chronic diseases across the world has led to a significant rise in the rate of hospitalizations and has subsequently driven the demand for stretcher chairs. This trend is expected to be rife over the coming years as well and be a primary driver for the stretcher chairs industry growth. Rising number of surgeries being performed across hospitals and medical centers is also expected to uplift stretcher chair demand.

The growing geriatric population across the world is also anticipated to be a key driver for the market as elderly people require more mobility aids than the general population. The increasing popularity of home care in various countries is also anticipated to benefit the growth of the stretcher chairs market over the next five years and is expected to drive demand for stretcher chairs for home use.

Other factors such as the budding dental industry, technological advancements, increasing investments in patient handling technologies, growing focus on patient safety and handling, increased healthcare expenditure, changing lifestyle trends, and surge in the ubiquity of degenerative diseases resulting in restricted mobility in patients are also expected to bolster market growth potential over the next five years.

On the flip side, lack of proper reimbursement policies in developing and underdeveloped economies and the presence of stern regulatory standards in several countries are expected to hamper market growth potential in the long run. Complex structure, high maintenance, and huge costs of powered stretcher chairs are also expected to adversely impact the global stretcher chair demand outlook in the future.

Focus on healthcare has increased substantially in recent years owing to the high prevalence of infectious and chronic diseases across the world. This has led to increased investments in healthcare infrastructure development by governments and this is expected to promulgate sales of stretcher chairs throughout the forecast period.

Countries such as India, China, Indonesia, and Brazil are anticipated to witness high demand for stretcher chairs owing to supportive initiatives taken by governments to bolster their healthcare infrastructure.

Focus on oral health and dental hygiene has increased notably in recent years owing to rising awareness among the general population and initiatives taken by NGOs and governments. The aforementioned factors have led to an increasing number of dental clinics as most dental practitioners prefer to have their own clinic.

To comply with these strict norms suppliers of stretcher chairs have to increase their production costs and this dents their profit margins and also abstains them from tapping into new competitive markets. 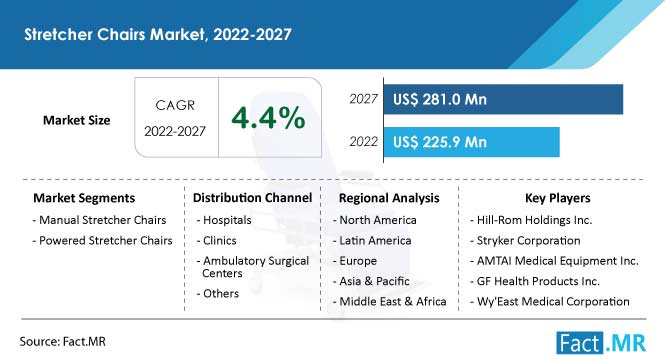 Which Region Holds a Commanding Share in the Global Stretcher Chairs Market?

The market for stretcher chairs in North America currently accounts for more than 45% of the global industry landscape and is anticipated to maintain a similar stance throughout the forecast period. The presence of key stretcher chair manufacturers, beneficial government initiatives, the high prevalence of chronic diseases, and the growing demand for bariatric surgeries are some of the prominent factors that drive the stretcher chairs market potential in this region.

The market in this region is expected to be led by countries such as the United States and Canada. Favorable reimbursement policies, developed healthcare infrastructure, and a growing aging population are prime factors that propel the demand for stretcher chairs in the U.S. and make it the most lucrative market in this region.

Currently, the United States stretcher chairs market is valued at around US$ 75 million. Meanwhile, shipments of stretcher chairs in Canada are predicted to increase at a CAGR of 3.3% through 2027.

A comprehensive and detailed account of all major and minor regions has been listed in this new stretcher chairs industry research analysis by Fact.MR, a market research and competitive intelligence provider.

What Opportunities Does the Stretcher Chairs Market in Canada Offer?

The Canada stretcher chairs market is anticipated to be primarily driven by increasing investments in healthcare infrastructure development and supportive government initiatives. Spending on mobility equipment and transportation equipment in the medical industry in Canada was estimated at around US$ 80 million in 2021 and this is expected to increase across the forecast period as the Canadian government bolsters its healthcare infrastructure.

However, stringent regulatory norms and the lack of favorable reimbursement policies are expected to hinder market growth in Canada in the future.

Sales of Which Type of Stretcher Chairs Lead the Race?

Manual stretcher chairs are a better investment choice for hospitals that provide a wide variety of services and treatments and are also a favorite for hospitals running on tight budget caps. The lower maintenance cost of manual chairs is another benefit that drives their sales potential.

However, advancements in technology have been boosting the popularity of powered stretcher chairs and these medical chairs are predicted to witness a hike in demand across the forecast period.

Prime players in the stretcher chairs market are anticipated to focus on product innovation and are expected to launch new products to increase their sales potential. Continuous expansion of the market through acquisitions and mergers is expected to create challenges for new and established market players over the coming years.

All the latest trends in the stretcher chairs market influenced by established and upcoming market players have also been discussed in this Fact.MR research study.

The stretcher chairs market in Canada is anticipated to evolve at 3.3% CAGR over the next five years.