The global swarm intelligence market is estimated to boom at a CAGR of 40.5%, rising from its current valuation of US$ 15 million to reach US$ 450 million by the end of 2033.

Swarm intelligence is an emerging technology that is influenced by the behavior of social elements such as ants, wasps, and bees. Swarm intelligence is an artificial network of agents that communicate with one another using simple rules based on various algorithms. Swarming is an artificial intelligence field that is built on self-organized and decentralized systems. It concentrates on collective behavior via local interactions between individuals in a group.

Swarm intelligence can be utilized to obtain a common outcome that involves humans through their collective decisions. This can be attained through a software program that enables humans to work collectively to find a solution. Hence, swarm intelligence is critical in achieving coordination among all agents in a group.

Increasing labor costs have been a source of concern for industries all around the world. Labor costs are a substantial portion of total operating costs, accounting for 60% to 65%. Where companies encompass an area of more than 200,000 square feet, manual occupations generally consist of two types of staff: direct and indirect.

Moreover, emerging countries are experiencing a steady increase in the aging workforce, which has resulted in concerns regarding safety, productivity, and quality control. As a result, industrial automation has emerged as a crucial strategy for addressing growing labor costs and workforce aging. Consequently, warehouse and industrial operators are increasingly relying on robotics to reduce operational expenses while keeping production at peak levels. This is where swarm intelligence comes into play.

Swarm intelligence is also being used to address location challenges, which is boosting its adoption in the transportation and logistics industries. In transportation, increased operational costs for businesses and long travel times necessitate the requirement for analytical models that can be solved using the swarm intelligence-powered Ant Colony Optimization algorithm for route optimization.

Furthermore, swarm intelligence's embedded process throughout retail logistics gives an enormous opportunity for e-commerce firms to automate their delivery services across their operational zones. As a result of these characteristics, global demand for swarm intelligence is booming.

Why is Swarm Intelligence Technology Picking Up Steam?

What are the Major Challenges for Companies Providing Swarm Intelligence technologies?

The swarm intelligence industry is facing several hurdles, such as a lack of technical expertise in many countries and regions, which can limit its expansion in those areas. Furthermore, given the increased risk of cyberattacks, data privacy concerns related to technology are a big growth limitation.

Moreover, high initial investment costs linked with intelligence, expensive research costs, and so on can act as major barriers in the coming years. 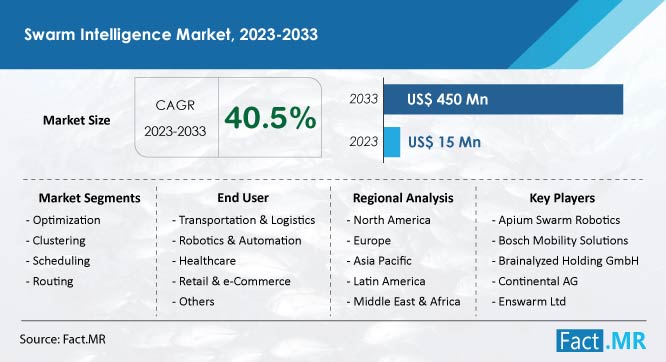 Why is the United States a Huge Market for Swarm Intelligence?

North America accounted for 45.2% share of the global market for swarm intelligence in 2022, according to this latest analysis by Fact.MR, a market research and competitive intelligence provider. The United States is making substantial contributions to the regional market due to the increasing use of swarm-based drones in military and defense agencies.

Furthermore, increasing demand for route analytics as a result of automation in the local retail e-commerce sector is boosting the demand for swarm intelligence.

“Increasing Use of AI and Advent of Robotics”

“Germany to Be Lucrative Market for Swarm Intelligence Tech”

Demand for drones has risen dramatically in recent years, which is expected to be a major driver of swarm intelligence adoption in the coming years. A drone is an aircraft-shaped device with no person or team that utilizes swarm algorithms to locate a specific target or resource in a more elaborate manner. Swarm intelligence applied to drones outperforms simple scanning techniques.

Moreover, swarm intelligence drones are widely employed in defense and military applications, and their high efficiency and precision are projected to fuel market expansion in the future years.

The global market is moderately competitive. Key players in the swarm intelligence market are actively pursuing marketing techniques such as partnerships, acquisitions, investments, technological innovations, and R&D activities to strengthen and widen their overseas footprint.

The global swarm intelligence market is valued at US$ 15 million in 2023.

The market for swarm intelligence technology is projected to reach US$ 450 million by 2033.

Global demand for swarm intelligence is expected to boom at a CAGR of 40.5% during the forecast period.

Usage of swarm-based drones in the military and defense industry is predicted to surge over the coming years.