According to Fact.MR- a market research and competitive intelligence provider- demand for drones flourished at a CAGR of 23.5% from 2017 to 2021. Large-scale expansion of industries has rendered it necessary to beef up surveillance and security measures, especially across areas such as defence and border security, leading to increased drone deployment.

During the COVID-19 pandemic, the market for drones experienced multiple fluctuations. In certain industries such as manufacturing and hospitality, prospects significantly narrowed throughout 2020, attributed to cessation of all activity in these domains due to the imposition of lockdowns. However, drones became necessary for general surveillance purpose, especially to ensure that social distancing protocols were maintained.

Use of autonomous drones as weapons of devastation is fast changing the industry. Unmanned Aerial Combat Vehicles (UACVs) are another name for some of these drones (UACV). In affluent countries, UACVs with precision guided bombs and missiles are on the rise. From 2022 to 2032, the industry is forecast to expand 9.3x.

What is driving the Worldwide Drones Market?

The increasing acceptance of drone deployment in military operations has prompted suppliers to produce drones that may be utilized in a variety of commercial applications.

Drone-assisted home deliveries have become a reality as a result of the efforts of logistics and retail organizations such as Amazon and UPS to implement the technology. Because commercial drones can travel at speeds of up to 100 miles per hour and transport products weighing less than 5 pounds, the delivery mechanism is projected to reduce delivery time and related expenses. Increased investments in drone technology are also expected to drive long-term industry growth.

Drones for future structures are becoming increasingly popular in the construction sector. Building managers will be able to meet project objectives more efficiently and quickly if sophisticated photography is used to scan construction sites and drones are used to follow activities throughout the construction lifecycle.

Many industrial conglomerates and corporate houses are using drones outfitted with thermal imaging cameras during emergency response to make contact with and identify casualties who are not apparent to the human eye. Similarly, hospitals are employing ambulance drones outfitted with defibrillators to provide prompt resuscitation to a patient in need. With climate change wreaking havoc on wildlife, conservationists are employing cutting-edge drone technology to monitor, track, and gather samples from endangered animals.

Rising popularity of commercial and business models leveraging drone technology will give the drone industry with precisely the necessary push, allowing stakeholders to lift their game in operational efficiency.

Agricultural Yield Improvements and Weather Forecasting to be a Key Trend

Farmers are using drones to increase agricultural productivity and minimize farming expenditures. Agricultural employees may eliminate duplicate operations and simplify them to make them more operationally feasible and efficient with the help of drones.

Agricultural Drones that use robotics can make the monotonous, repetitive, and time-consuming operation of harvesting more efficient, as well as offer methods for scooping up product or pollinating crops using aerial drones. Drones' sophisticated imaging capabilities can aid in the real-time monitoring of weather changes.

As a result, weather patterns may be tracked as they evolve. For example, autonomous sail boats that operate as drones may collect oceanic and atmospheric data from the ocean's surface and utilize it to forecast weather trends and patterns. With worldwide emphasis focused on climate change, stakeholders are leveraging emerging kinds of software and technology (Drone Motors, Drone Batteries, etc.) to be employed in drones, causing a substantial shift in the drone business. 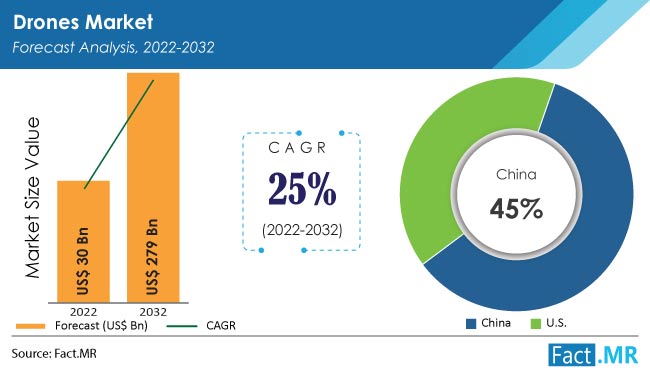 What are the Growth Prospects for U.S. Drone Market?

U.S. held the largest market share in terms of volume in 2020, accounting for approximately 37%, and is expected to grow significantly over the next ten years as a result of favorable government initiatives, advancements in drone technology, and growing demand from businesses across various industries.

Furthermore, the Federal Aviation Administration (FAA) in the United States has issued new regulations to give more coherent and consistent guidance for the legal and safe operation of Unmanned Aerial Vehicles (UAVs) in commercial environments. These laws and regulations are intended to lower entry barriers and boost product uptake in the United States.

What is the Future Outlook for Drones Market in China?

The recent revisions in drone legislation in various nations in the region are projected to assist market growth. In the last six years, China has emerged as the worldwide centre for drone production. China accounts for over 70% of the worldwide civilian drone industry, with approximately 1,200 drone manufacturers at the start of 2019.

To encourage the use of drones in many industrial sectors, the Chinese government is implementing various subsidy programmes and other advantageous domestic policies. Drones' expanding application areas are driving up demand for these unmanned aerial vehicles (UAVs) in China.

Previously, hobbyist drones dominated the Chinese drone business. However, the growing need for drones for monitoring, inspection, surveying, and surveillance applications in the construction, agricultural, infrastructure, energy, telecommunications, mining, and insurance industries is fueling the country's commercial drone boom. As per Fact.MR, China is likely to accumulate a revenue share of 45% in the global market.

Will Military Drones Emerge as an Opportunistic Segment?

By product, sales of military drones are expected to remain prominent, attributed to the ever broadening defence expenditures by all countries across the world. A market share worth 55% is projected for the military drones segment in 2022 and beyond.

As the global political arena becomes highly volatile, countries are investing a substantial portion of their finances in strengthening their military capabilities, including surveillance activity. Sophisticated military drones for monitoring border incidents or aggression are gaining ground.

According to Fact.MR, the construction industry shall account for a significant proportion of drone usage, flourishing at a CAGR of 18%. Drones are increasingly being used to conduct visual inspections of high-risk regions on building sites. The capacity to collect real-time data from drones improves the efficiency of on-site communication and administration.

Engineers and surveyors may also use drones to assess high-rise constructions and visualize project progress through overhead photos. Furthermore, they give site managers with an overview of prospective concerns and simplify critical decision-making features to streamline building site operations.

The drone business is expanding rapidly, with industry leaders like as DJI and Parrot pursuing autonomy in all of their drone features and functions. Frontrunners in the drone sector appear to be focusing on R&D and collaborative collaborations.

*89 figures and 28 tables includes by FactMR