The importance of nasal and pulmonary medication delivery channels is increasing for the treatment of human diseases. These delivery methods, particularly for peptide and protein therapies, provide intriguing substitutes for parenteral drug administration. For this reason, many medication delivery devices have been developed and are being further researched. These include cyclodextrins, microspheres, gels, prodrugs, liposomes, and proliposomes, among others. Thus, their simple way of application is boosting sales growth.

The biotechnological method for creating a particular protein is known as protein production. It is often accomplished by altering an organism's gene expression to get it to express a recombinant gene in huge quantities. This involves the conversion of the recombinant DNA into messenger RNA (mRNA), translation of the mRNA into polypeptide chains, and eventual folding and targeting of the polypeptide chains into functional proteins at particular subcellular or extracellular sites. Systems for producing proteins, commonly referred to as expression systems, are employed in the biotechnology, medical, and life sciences fields.

The outlook for transfection technologies is incredibly appealing since these technologies have a wide range of uses in discovering precise biomarkers by understanding the molecular pathways of diseases, and these biomarkers can be helpful in the diagnosis of chronic diseases such as cancer.

The most significant factors expected to propel the growth of the transfection technologies market during the forecast period are broad-reaching applications in protein production and vaccine development, and proliferation in the prevalence of cancer and other chronic illnesses as the geriatric population is on an abrupt upsurge.

The prevalence of chronic disorders and viral infections are rising across the globe and are responsible for the higher rate of mortality and hospitalizations.

According to a recently updated report by WHO,

Thus, increasing cases of HIV, boosts its treatment demand, fueling the market growth. As a result, the demand for transfection technologies is rising due to such ongoing trends.

Genetic biomarkers commanded a substantial market share due to their widespread use, high reliance rate, and simplicity of analysis. More than 85% of tumours can now be identified with the help of genetic and proteomic biomarkers.

In the field of cancer diagnostics, epigenetics has received significant recognition. To create biomarkers and cancer-targeting medications, numerous players are performing in-depth studies to examine significant epigenetic alterations connected to cancer. Sales growth of the transfection technologies market is anticipated to be fuelled throughout the projected period due to the increasing pharmaceutical companies' cooperation in the development of novel medications that target epigenetic biomarkers.

Key market players in the transfection technologies market are strongly focusing on advancing the technologies and eliminating any present drawbacks. This is attributed to the fact that the prevalence of contagious diseases is rising rapidly across the world.

Which Aspects Should Manufacturers of Transfection Technologies Focus On?

The market may face difficulties because the transfection procedure requires expensive gear. Although chemical transfection techniques are somewhat less expensive, they are also more error-prone.

Additionally, the use of substances such as calcium phosphate can negatively impact how cells function. The amount of total DNA needed in calcium phosphate transfection is typically 10–50g in 450 litres of sterile water and 50 litres of 2.5 M CaCl2 per 10-cm plate, however, this amount varies greatly amongst plasmid preparations, as well as with various cells and conditions.

Due to their bigger holes and ion imbalance, techniques such as electroporation and microinjection are seen as dangerous since they might mutilate cells while penetrating the cellular membrane. This is expected to impede the sales of transfection technologies. 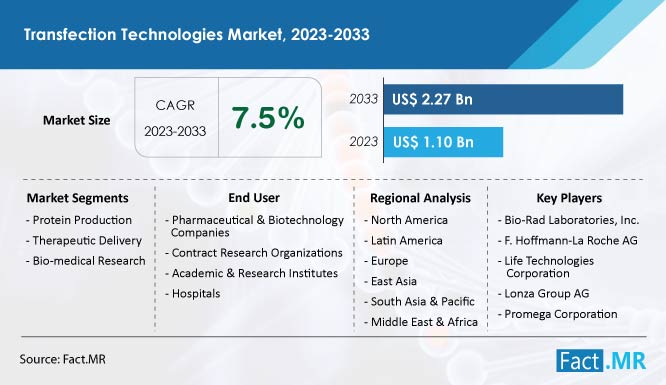 Why is North America the Most Profitable Market for Transfection Technologies?

The global market is currently dominated by North America, due to the factors such as the rising incidence of infectious diseases, which necessitate the use of antibiotics, and the expanding use of cell-based products, which necessitate the use of transfection techniques to treat chronic illnesses such as tuberculosis, cancer, and cardiovascular disorders. The United States and Canada both are the largest users of transfection technologies and the presence of key market players supports sales growth.

How is Demand for Transfection Technologies Progressing in Asia Pacific?

“Presence of Target Patient Pool and Growing Spending on Healthcare”

India, Japan, China, and South Korea are the leading marketplaces in the Asia Pacific region. India is rapidly developing in the genome sequencing sector.

Growing healthcare spending in Asia Pacific is anticipated to create a favourable environment for established international manufacturers wanting to grow their transfection technologies business. This region also has a growing patient pool with consequent untapped market potential. Additionally, the governments in the region are actively involved in encouraging the use of cell and gene therapies, which supports sales growth.

Why are Suppliers of Transfection Technologies Attracted to European Countries?

The best market for producing items for cell and gene therapy is in Europe. More than 238 firms involved in regenerative medicine are based in Europe.

Nearly a quarter of the therapeutic developers for regenerative medicine come from Europe. Thus, rapid developments in cell and gene therapies are boosting the demand for transfection systems in European countries such as the U.K., Germany, and Italy.

High gene transfer efficiency, low cytotoxicity, and versatility are all features of the reagents for transfection. Additionally, In-vivo transfection for use in gene therapy applications may utilize this reagent-based method. Reagent-based transfection technologies are also expanding significantly as a result of their affordability and fewer complications in transfection procedures.

The transfection technologies market is valued at US$ 1.10 billion in 2023.

Global demand for transfection technologies is expected to increase at a CAGR of 7.5% from 2023 to 2033.

Revenue from the sales of transfection technologies is projected to reach US$ 2.27 billion by 2033.