Latest released report on the global hoof boots market by Fact.MR estimates market shipments to stand at around 131 thousand pairs in 2021. A global decline of 1.8% in terms of value was seen in 2020, which is projected to stabilize with Y-O-Y growth of around 7.2% in 2021. As such, the hoof boots market size in 2021 is set to reach a net valuation of US$ 14.3 Mn, adding significant $ opportunity in the overall market.

As per Fact.MR, over the past half-decade, global market value for hoof boots increased at a CAGR of around 5.9%. This is attributed to rising adoption of hoof boots across potential regions having high equine density.

Regions such as North America, Europe, and APAC house a high number of horse owners, stimulating demand for hoof boots. Demand for hoof boots from Australia is also surging owing to increased manufacturers’ concentration in the country. Furthermore, sales of hoof boots in Germany, the U.K., and Italy have also provided significant pace to overall market growth in Europe.

In addition, increased usage of hoof boots for different equine activities, including recreational, sports, and farm use, has driven the demand curve on the positive side of the graph.

Moreover, with escalated adoption of hoof boots in therapeutic use cases to cure equine diseases such as laminitis, abscesses, navicular etc., the business is projected to expand further at a healthy CAGR of around 9% over the next ten years.

Will Equine Activities Continue to Elevate Demand for Hoof Boots?

Globally, equine owners are now spending significant dollars on the healthcare and recreational activities of their equines. Increasing recreational and leisure activities have remained a major cause for the adoption of hoof boots in equines.

Owing to this, equines can now be seen taking part in various sporting and farming activities with well-equipped with hoof boots and other protective equipment. Professional equine owners are looking forward to spend on these equine accessories and protective gear to maintain the physical wellness of their animals.

The U.S., Italy, Australia, U.K., France, etc., with equine rich concentration, are observed to spend 2.1X when compared to other countries. In addition, this index has been seen increasing attributed to the engagement of equines in various activities, ranging from sports to recreational.

On an average, it has been observed that U.S. equine owners spend around US$ 9 Mn annually on various equine activities, including recreational purpose, showing purpose, farm work, rodeo, polo, and police work. In addition, use of hoof boots in horse racing has also emerged as a significant growth lever for the market.

Considering the above-mentioned positive trends, Fact.MR estimates demand for hoof boots to expand at a CAGR of around 9% over the forecast period of 2021-2031. 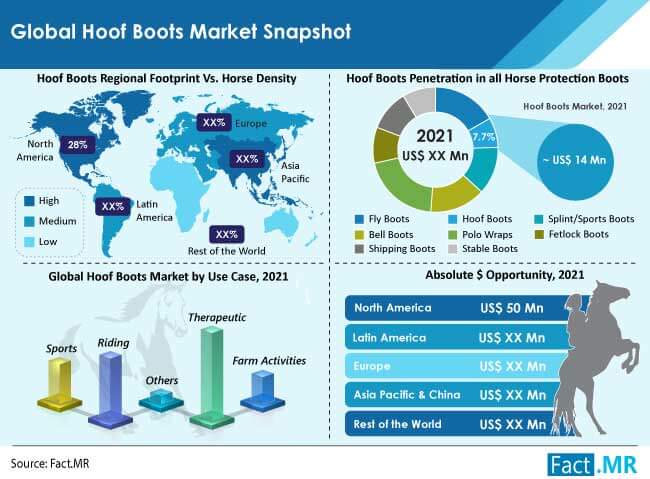 What are the Possible Obstructions to Hoof Boot Sales?

Hoof boots are identified as a key assets for equines. The prime use case of hoof boots remains as a therapeutic guide helping equine owners to keep their animals physically well. Various diseases such as laminitis, abscesses, navicular, etc., are propelling hoof boot adoption. Apart from this, hoof boot penetrating in other applications has remained quite low.

In addition, hoof boots occupy a very small share in overall protection boots and hoof accessories. Owing to this fact, manufacturers are focusing on other protection boots in order to gain momentum in the market.

Which Regional Market Leads the Sales of Hoof Boots?

North America has been projected to account for around 35% share in the global market in term of sales. Y-O-Y growth for hoof boots in North America was around 3% in 2020, owing to reduced shipments globally. North America, being the epicentre for hoof boot production, is well-equipped with favourable infrastructure and end users to escalate overall demand.

Additionally, surging per capita income of equine owners in North America benefits the region. Equine owners tend to spend almost 10% of their savings on the hoof treatment of their equines. This is attributed to the rising equine humanization culture in North America.

Why is the U.S. Seen as a Courtyard for Hoof Boot Demand?

The U.S., being the largest equine-concentrated region globally, tends to reflect high demand for hoof boots for miniature horses from its potential equines populated states. States such as California, Texas, Ohio, Florida, and Oklahoma are responsible for registering more than 60% of overall demand for hoof boots in the U.S.

The country accounts more than 7 million horses, including barefoot ones, demanding hoof boots for different activities. Owing to this fact, these prospective horse owners are most attractive potential adopters of hoof boots. Manufacturers of hoof boots in the U.S. thus eye these owners, accordingly adjusting their product portfolios.

How is China Emerging as a Potential Market for Hoof Boots?

China has emerged as a new potential hotspot for horse population. It is observed that the country houses around 5 million horses, majority of which are indigenous.

In China, maximum number of horses are observed to reside in northern and southwestern provinces, escalating demand for hoof boots for ponies and other breeds.

People in China believe that horses are not just an animal but a symbol of hardship and courage. In addition, they state that a horse’s intelligence is equivalent to a child of 7-8 years, and recognize horses as a part of their family. Also, in China, various applications of hoof boots in equestrian sport is further bolstering sales.

Considering all the stated facts, Fact.MR believes China will contribute prominently to global market growth and is set to provide an absolute $ opportunity of around US$ 1 Mn by 2031.

How is Demand for Hoof Boots for Horses Evolving in Other Countries?

Mongolia: Mongolia is anticipated to be the next potential hotspot for hoof boot sales. This is attributed to high equine density in the country, out of which, more than 60% are barefoot.

People in Mongolia tend to keep equines at their homes, and thus, has come under Fact.MR’s radar as a potential market for hoof protection in the near future. The market in Mongolia is slated to expand at a solid CAGR of 12.8% by the end of 2031.

Brazil: Brazil is well-known for its culture, people, and horse landscape. The boot protection business in Brazil has grown in the last 10 years, attributed to the use of hoof boots in riding, racing, and other entertainment activities.

Several events organized by ABCCC (Brazilian Association for the Crioulo Horse) help in sustaining and increasing the horse count in the country. In addition, the horse-related business in Brazil generates roughly 600,000 jobs.

People in Brazil tend to invest negligible capital on horses, though trends now seem to be reversing. Hence, Fact.MR believes that Brazil has the latent potential to come up as a prominent area for the demand for hoof boots for draft horses.

The versatility of hoof boots has remained a prime cause for their wide adoption. Today, hoof boots are available in a variety of colours, patterns, and for various terrains as well.

Manufacturers are keeping a strong track of consumer preferences, including horse owners, both professional and enthusiasts. This has helped them provide best-suited boots to work efficiently in all terrains, based on consumers’ preferences and feedbacks.

When it comes to hook type, the closed loop structure remains the most attractive segment, spiking demand for hoof protection boots. The closed loop structure over stud closure and buckles provides additional support and comfort to horse hoofs. In addition, loop closures are easy to attach and detach, thus gaining much preference from key horse population clusters.

Attributed to these facts, the closed loop hook type segment is projected to rise at a CAGR of around 9% and increase its market share by 129 BPS by 2031.

Which Use Case Has Been a Prominent Driver for Hoof Boot Adoption Globally?

Therapeutics holds the largest share in the adoption of new-technology hoof boots. Furthermore, technological advancements in the material of hoof boots and comfort have aided horse owners who are struggling to find reliable solutions for their barefoot horses.

Attributed to these factors, the therapeutics segment is anticipated to expand at a CAGR of around 9.3% over the decade.

Globally, the equine hoof pads and equestrian equipment industry witnessed a major setback during 2020 owing to high infection rates caused by COVID-19. The pandemic left no industry unturned and had an impact on hoof boot sales too.

Y-O-Y growth in revenue contracted by 1.8% in 2020 when compared to 2019. This contraction can be attributed to closing down of most equine sports and recreational events globally. Various prominent equine associations abandoned the hosting of activities, including use of hoof boots for dressage, racing, showcasing, etc.

However, use of hoof boots for eventing and other recreational purposes has evidently improved during FY 2021. 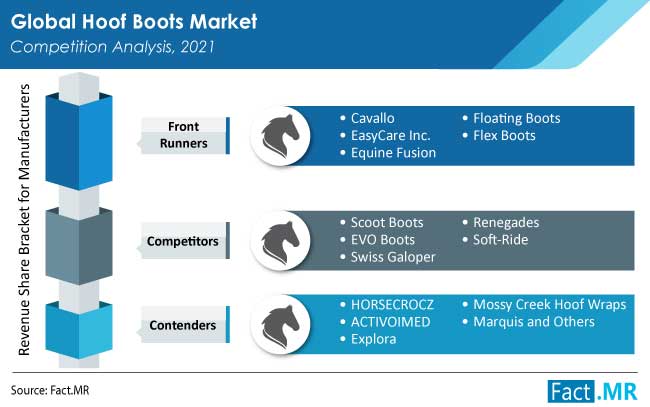 Top companies in the hoof boots market are looking to expand their consumer base. Key players are opting for a mix of organic and inorganic growth strategies such as capacity expansion, acquisition, and collaboration to help them garner more market share that would provide them with a competitive advantage.

Recent developments related to companies offering hoof boots have been tracked by the team at Fact.MR, which are available in the full report.

At present, the global hoof boots market is worth around US$ 14.3 Mn.

Hoof boot manufacturers are collaborating with prominent distributors and retailers where they have low footprint.

Top 5 hoof boot manufacturers hold around 45% in the market share.

China, the U.S., France, Brazil, and Canada are the main countries driving demand for hoof boots.

The U.S., Canada, and U.K. are major hoof boot producers.

Therapeutic hoof boots are the focus point of prominent manufacturer to increase their sales revenue.

*115 figures and 48 tables includes by FactMR