As per the global line marking robots market research by Fact.MR, historically, from 2016 to 2020, market value experienced growth of 27% CAGR, wherein, the U.S., Canada, U.K, Germany, and Italy held significant share in the global market.

With growing modernisation and rising investments in sports across regions, the market is forecast to expand at a mammoth CAGR of 29% by value over the coming 10 years.

How is Automation in Line Marking Robots Accelerating Demand across Regions?

Conventional line marking machines are manually operated. They are walk-behind machines that are used to apply paint on various surfaces, and are less efficient and have higher probability of error.

Automation has led to eliminate human error, increase level of accuracy, and aided in reducing time consumed during the process, along with enhanced safety.

Deployment of line marking machines have eased the operation of marking various types of lines in the field. These include hash marks, yard numbers, coaching zones, track marking, pitch and field lines, etc.

In addition, adoption of various positioning technologies such as GPS and GLONASS in line marking robots is owing to increase in demand due to their accuracy and hassle-free operations.

Robots that are integrated with GPS technology has grown in demand at a CAGR of 25% during the historical period (2016-2020), and expected to increase 26% by volume CAGR through 2031.

Considering global stadium numbers, there are a total of 4,864 stadiums in over 224 countries. These devices are perfectly designed for marking lines across fields for sports such as football, hockey, rugby, etc., and tracks.

There has been increase in investments in the field of sports. Popularity of football is rising in many developing nations. As per estimates, there are more than 5,300 clubs and 7,000 football teams in the English football league.

Football field marking machines have high demand due to their extensive use. As the enrolling rate is increasing day by day, popularity and investments in sports have led the adoption rate of line marking machines surge.

Collaboration with various sports authorities, clubs, schools, and universities will enable manufacturers to mark their competitive stand in this highly consolidated market. With the development of infrastructure and push towards sports at various educational institutes, utilization of line marking robots for college-level sports competition is set to gain high traction. 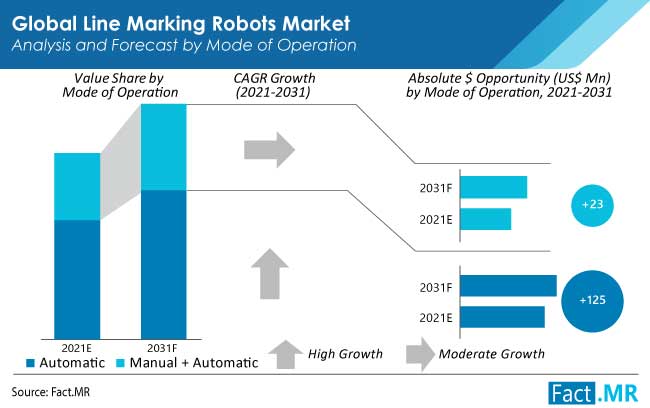 Line marking robots are sophisticated and one of a kind technology gaining high attraction in the market. High demand is due to their flawlessness and swift operations.

In order to increase market reach, manufacturers are opting for line marking robots rental services as their secondary business to cater to short-term customers. This helps end users in gaining access to high-quality product and results in high profit margins for market players.

Companies such as Turf Tank, Tiny Mobile Robots, and Boels Rental lead the rental line marking robot space. Availability at lower prices and for specific use time are likely to raise demand for rental services of line marking robots.

Study by various organisations reveals that the best measurement for sports expenditure is countries per capita expenditure on sports. For instance, India spends 11 rupees per year per capita on sports, whereas China spends almost 200 times that. Countries with higher expenditure tend to align towards more automation in the field for saving time and gaining higher efficiency.

For gaining popularity and positioning as prominent entities with brand advertising, various sports authorities, clubs, and teams gain private sponsorships. These sports regulating bodies generate their own cash, while they source the product from various line marking robot manufacturers and develop corporate sponsorships.

Likewise, the bodies receiving these highly automated machines in the form of sponsorships allows growth in volume sales of line marking robots.

What are the Restraints That Line Marking Robot Suppliers Encounter?

There is higher cost of manufacturing and ownership along with low penetration in countries having less expenditure on sports, especially developing nations.

These device are loaded with a number of sensors, chips, and high-end software. The manufacturing as well the service gets expensive. This results in higher manufacturing, owning, and maintenance cost. These factors restrain low-income end users from owning the product.

On similar grounds, countries with lower sports budgets and teams with less number of sponsors face the same dilemma. Developing nations such as countries in Latin America, South Asia, and Africa have less per capita expenditure on sports and limited sports infrastructure. This limits the use of high-end technology in the field.

In addition, they lack skilled workers to operate these machines, and this has also contributed to the lower adoption rate. As a result, in these areas, the conventional line marking machines market is significantly matured than automated machines.

What is the Regional Outlook for Line Market Robot Manufacturers?

Europe is expected to be next in line by accounting for almost 36% demand by volume. Higher popularity of football and several field events in the region has led to surging demand across the continent. 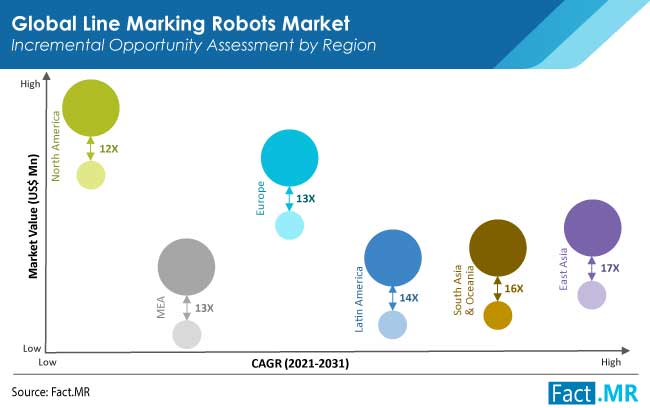 Why is the U.S. a Global Leader for Line Marking Robot Demand?

This humongous demand for sports field marking equipment is likely to be due to high number of stadiums in the country, along with famous big leagues in field and track events.

The country’s expenditure on sports and technology is huge, which is evident from its performance in global level events such as the Summer Olympics, Para Olympics, rugby leagues, etc.

Which Other Countries are Leading the Demand Graph at a Global Level?

U.K.: Following the trends of line marking machines in the U.S. and Canada, the U.K. is next in the line in terms of both, demand and manufacturing. Some of the leading manufacturers in the country are Fleet Line Markers and Pitchmark. The U.K. market is expected to hold 22% by volume of Europe’s demand.

Germany: Germany holds around 6% of global demand and 18% of Europe’s demand by volume. The country is Europe’s largest sporting goods market. Popularity of field sports such as football, hockey, and handball in the country have propelled the growth opportunity for the line marking robots market.

Italy: Popularity of football in the country is immense. Track events such as cycling and indoor sports such as volleyball are most preferred. These sports use line marking machines to a great extent, which has led to higher demand for line marking robots in Italy. The market is expected to expand at a CAGR of 26% by volume and reach almost 220 units by 2031.

Russia: Russia has a long history of sports and supremacy in events at a global level. Early technology adoption has aided sales of line marking robots in the country. Russia holds around 3% of global demand by volume, creating a potential market for manufacture to pool in capital for further expansion.

Why are GPS Line Marking Robots the Star of the Show?

Positioning systems in these machines provide accuracy and easy operability. GPS is preferred due to its acceptance and wide use at the global level. Many countries use this technology and are familiar with its capabilities.

Why are Line Marking Robots with Speed Between 2.1– 5 m/s Highly Sought-after?

Revenue from line marking robots with marking speed between 2.1– 5 m/s is expected to increase at a CAGR of 28.5% during the forecast decade. This category serves most of the requirements in field and track marking.

Thus, adoption rate of this category is higher, and it holds around 63% market share by revenue.

By Paint Capacity Which Category Holds the Most Revenue Potential?

Paints capacity holds an important place since this defines the weight, working hours, speed, and line marking capacity of the device.

Majority of the companies discussed in the report have focused on expansion, investments, acquisitions, delivery focus, portfolio expansion, and brand development.

Similarly, recent developments related to companies offering line marking robots have been tracked by the team at Fact.MR, which are available in the detailed report.

What is the current valuation of the global market for line marking robots?

The global line marking robots market is worth more than US$ 10 Mn at present.

What is the sales forecast for line marking robots?

What was the last 5 year’s market CAGR for the sales of line marking robots?

What is a key trend likely to shape line marking robots market growth by 2031?

Customization for specific conditions as per end user requirements and rental services as a mode of business will drive market expansion over the coming years.

What is the market share of top 3 manufacturers of line marking robots?

Which are the top 5 countries driving demand for line marking robots?

What is the demand graph for below 10 liter line marking robots?

Demand for paint capacity below 10 liter line marking robots is expected to expand at a CAGR of little over 25% during 2021 to 2031.

At what percentage is sales of line marking robots expected to register growth in South Asia & Oceania?

What are the future demand statistics of four wheeled line marking robots?

Sales of four wheel type line marking robots are likely to increase at around 24% CAGR over the decade.

What do statistics for China and Japan reveal?

The market in China and Japan is set expand at over 38% and 26% CAGRs, respectively, with both countries accounting for 90% share in the East Asia market.