Robots that are built to function autonomously and for extended periods of time without human assistance are known as autonomous robots. Intelligent qualities found in autonomous robots can aid them in understanding their physical surroundings and automate tasks that were previously performed by human hands in maintenance and control.

Autonomous robots typically perform tasks without human interaction, unless the task requires human interaction. Many of these robots are equipped with sensors and other functional devices that help them recognize obstacles in their path and avoid corridors, rooms, and other environments. Complex delivery robots can also be programmed to move fully autonomously through multi-story buildings using elevators.

Manufacturing and robotics go hand in hand. Today's production environment heavily relies on robotics. Any organization that aims for safety, along with optimum efficiency, and market competitiveness should prioritize automated manufacturing systems.

From 2018 to 2022, the global market for autonomous robots registered a CAGR of 7.3%. Fact.MR, a market research and competitive intelligence provider, reveals that the market will exhibit growth at 9.2% CAGR between 2023 and 2033. 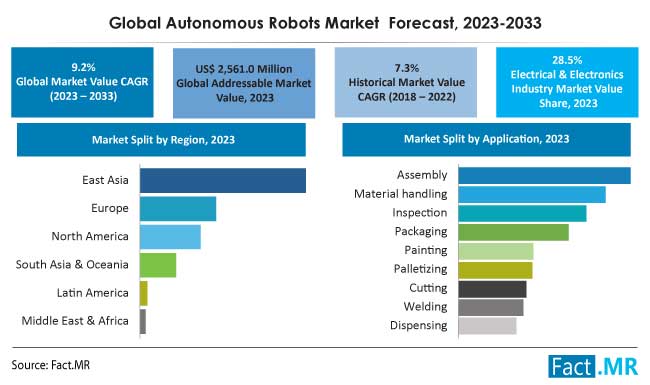 Market share analysis of autonomous robots based on region and application is provided in the above image. Under the application segment, assembly sub-segment dominates with 19.2% market share in 2023.

Without the direct supervision of an operator, AMRs dynamically assess and adapt to their surroundings while carrying out a variety of duties. AMRs are able to comprehend and adapt to changes in their environment with the help of simultaneous location and mapping (SLAM) systems and modern mapping technologies. They are useful devices that may be applied across applications and sectors thanks to their versatility.

Businesses frequently use AMRs to help in picking, finding, and moving merchandise so that staff may concentrate on high-value tasks like customer care.

Many firms use low-powered AMRs that use less energy when productivity is crucial. AMRs can recharge and resume work more quickly when they require less power, which reduces downtime and keeps production and fulfillment flowing.

Preparations to work with less amount of people have forced manufacturers in different sectors to embrace the majority of the values ??of lean manufacturing, such as eliminating non-additive activities, creating traction in the production process, and creating flow among the stages in the production process. This allows manufacturers to eliminate some of the waste of lean manufacturing, including movement, waiting, transportation, and capacity waste.

Automation, and in particular autonomous robots, can contribute to the accurate implementation of the concept of lean manufacturing, especially by helping to eliminate waste from production processes. It is observed that the adoption of AMRs alone can contribute to sustainable manufacturing, the real value comes from the adoption of autonomous robots as part of industry 4.0 and smart factory initiatives, where sensors, AMRs, machines, and production systems are connected to each other and can communicate with each other using some standard internet protocols.

All these factors will initiate the use of autonomous robots thereby augmenting its sales and it will garner an absolute dollar opportunity of US$ 3,848.9 million in the forecast period.

What Do Autonomous Robots Manufacturers Need to Watch Out for?

Small and medium-sized companies have relatively small budgets and are reluctant to incur high initial costs in robotic solutions, hence hire laborers for performing rack transportation in warehouses. Along with that since under drive lifting robot are more complex, the maintenance will be expensive and time consuming. This will generate pressure on the end use industries to reduce costs, which may act as a restraint on the market.

Singapore is best known as the financial center of the world. The country is now scrambling to build its reputation as an innovator in robotics. The country has abundant facilities in the research field of the robot industry. According to recent survey, Singapore had the highest density of robots in 2019 with 918 robots per 10,000 employees.

The electronics industry, especially semiconductors and computer peripherals, accounts for 75% of all operating inventories. In 2016, Singapore had the second-highest density of industrial robots.

In 2016, Singapore committed more than US$ 450 million over three years to support the National Robotics Program (NRP) to accelerate the adoption and development of robotic solutions in healthcare, manufacturing construction, and logistics. Hence the Singapore is poised to grow at an impressive CAGR by providing a valuation of US$ 71.0 million in 2023.

How Market for Autonomous Robots is Estimated to Rise in Japan?

Japan was the world's largest exporter of robots in terms of shipment value and number of units in operation. Japan has 364 robots per 10,000 employees, the same as Germany. Japan is the world's leading robot manufacturer, as 47% of robots are made in Japan.

According to a report, 34% of the Japanese company's shares are held by the electronics and electrical industry, 32% by the automotive industry, and 13% by the metal and mechanical engineering industry. Owing to these the Japanese market for autonomous robots will grow at a healthy CAGR and will capture a market share of 15.8% in 2023.

In East Asia, Japan is one of the most important key countries for service robots. The country continues to focus on robotics and how it can improve both quality of life and environmental conditions. The country aims to use advanced technology to build an optimized and sustainable world.

How Food and Beverage Sector Will Lead to Market Growth?

Many end-use industries, such as the pharmaceutical, chemical, personal care, and cosmetics industries, use palletizing systems. Due to its low cost, compact design, and high throughput rate, palletizer is ideal for end-line packaging of food and beverage products.

The food and beverage business has made considerable investments in automation, which have a wide range of positive effects on various production levels. Optimal coordination is required for ordering, manufacturing and packaging of goods till the time the goods reaches to the consumer.

It is no secret that automated palletizing technology can do duties more effectively and precisely, and vendors are constantly under pressure to provide goods in greater quantities and with more variety. Therefore, the food & beverage industry will likely to capture a market share of 16.2% in the overall market in 2023.

How Rise in Palletizing Application Will Drive Sales of Autonomous Robots?

One of the most important pieces of equipment in automated material handling systems is the palletizer. In a warehouse, distribution center, or manufacturing facility, the pallet construction process is automated using either traditional palletizers or robotic palletizers, depending on the requirements.

Numerous technologies could be used, depending on the palletizer, to assist the producer in creating the ideal pallet. The increase application of palletizing will also lead to increased sales of autonomous robots by providing a market value of US$ 211.5 million in 2023.

Such innovative usage of autonomous robots and the implementation of new advanced robotic technology will pave a way for revenue generation for the manufacturers.

The market is likely to reach a valuation of US$ 6,175.0 Million by the end of forecast period.

The electrical and electronics sub-segment is likely to reach a valuation of around US$ 728.8 Million in 2023.

East Asia region holds the leading market share of around 43.1% in 2023 and presumed to increase in same growth curve by the end of 2033.