Robust urbanization and globalization has made a positive impact on consumer awareness about a wide range of wireless devices and electronics. The factors such as increased disposable income and availability of cost-effective electronic products such as smart phones, advanced wireless devices, etc., are like to support the market. The demand for broadband amplifiers is likely to grow by 3.9X over the assessment period.

In addition, factors such as increasing global population and changing lifestyle are primarily creating the need for advanced wireless, telecommunication services. In light of the tremendous growth in the sales of wireless devices, manufacturers are focusing on development of smarter and more efficient wireless electronic devices.

The medical procedures such as magnetic resonance imaging (MRI) and radiofrequency ablation (RFA) make use of RF amplifiers as they offer high precision and accuracy. RF power amplifiers are also used in sensitive applications such as military communications, plasma physics, and electromagnetic compatibility (EMC) testing.

China based RF power amplifier market is considered as the major revenue generating region in East Asia. The region is likely to reach a valuation of USD 469 Million by the end of 2022. China is a major market for industrial verticals like automobiles and consumer electronics.

This region has become a global footprint for business expansion and large investments opportunities. As per GSM Association, there are more than 50% of the overall mobile subscribers live in China and India. Moreover, the technology shift of the users from 4G to 5G in this region is one of the key contributing factor to hold a market share of 52.5% in 2021.

What is Growth Outlook for U.S. based Market for RF Power Amplifier?

The U.S. based RF power amplifier market is one of the largest market share holder with 78.8% in 2021 in North America region. The favorable smart technologies, coupled with high per capita expenditure, has created advantageous environment for the adoption of RF power amplifiers in the U.S.

The presence of prominent players like Texas Instruments, Analog Devices, Inc among others in the region is also expected to boost the market growth. The sales for RF power amplifier is expected to reach at USD 3.8 Billion by the end of 2032. 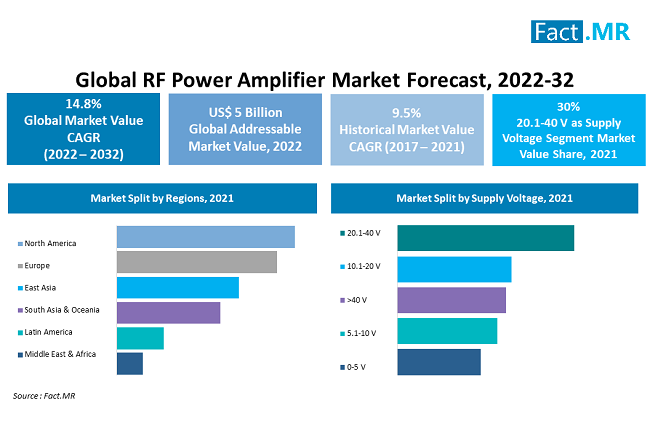 How Increasing Demand for 5G Infrastructure in Use Case to Fuel the Market Growth?

In the next half-decade, telecom companies are anticipated to cover the globe with 5G networks. Semiconductor manufacturers have begun to upgrade their product portfolios for 5G-capable infrastructure, according to reports. Recently, NXP Semiconductors has launched RF power amplifier modules to cover the frequency range for 5G cellular network development.

Investment into R&D of the next generation of multi-mode RF power amplifiers will potentially play a pivotal role in enabling businesses address the challenge of adapting the legacy platforms to support modern business operations, thereby unlocking infinite opportunities of growth in the market in the near future.

Similarly, recent developments by top providers of RF power amplifier have been tracked by the team at Fact.MR, which are available in the detailed report.

What is the market size of RF Power Amplifier in 2022?

The global RF power amplifier is projected to reach at a valuation of more than USD 5.2 Billion in 2022.

What is the CAGR for RF Power Amplifier Market in the forecast period?

What is the RF Power Amplifier Historical CAGR for the Period of 2017-2021?

What is driving demand for RF Power Amplifier?

The increasing sales of smart phones and advanced wireless devices to drive the demand for RF power amplifier.

Who are the Top 5 prominent Market Players in Global RF Power Amplifier Market?

Which are the top 5 countries driving demand for RF Power Amplifier?

At what rate is RF Power Amplifier sales expected to increase in Europe?

Which segments is dominating in Material of RF Power Amplifier?