Demand for electronic support systems is anticipated to rise at a CAGR of 5% through 2027 due to the expanding need for equipment and methods for intelligence, surveillance, and reconnaissance by the international defense sector.

According to Fact.MR, a market research and competitive intelligence provider, the demand for electronic warfare systems is projected to increase at a CAGR of 4.5% from 2022 to 2027.

A military tactic known as electronic warfare (EW) uses the electromagnetic spectrum to detect and communicate using radio, radar, or infrared communications as well as to prevent enemy attacks. The electromagnetic spectrum is now used by the armed forces for communication and operation. Modern technologies have been integrated into various military applications due to the ongoing innovations in electronic support measure (ESM) technology.

Market expansion can be attributed to several factors, including advances in electromagnetic spectrum technology, an increase in geopolitical tensions and terrorist attacks, and an increase in the military's use of unmanned aerial vehicles (UAVs).

The adoption of electronic warfare is being pushed by factors such as the growing requirement for the command to make choices quickly based on information gathered, obtaining a common operating picture of military operations, and transferring them to the preferred platform with a high level of encryption.

Usually, commanders have only taken geography, time, and function into account while planning and carrying out operations. Due to the complexity and dynamic nature of today's battlefields and red alert zones, where commanders must weigh many interrelated factors when making judgments, modern electronic warfare is being used more frequently.

Increased defense spending globally, an increase in the demand for surveillance, intelligence, and self-protection capabilities, and the adoption of electronic security systems in civil aircraft are the factors driving market expansion. 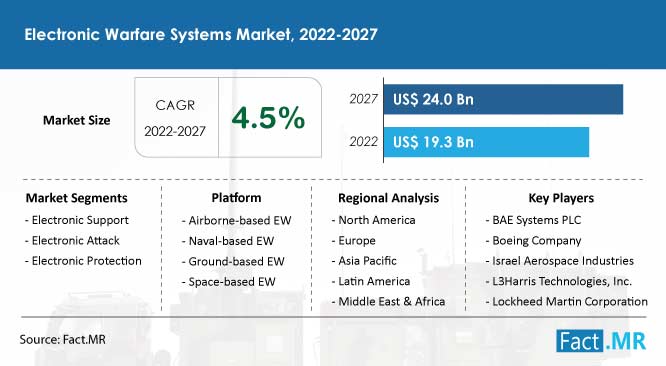 Integrated electronic warfare systems have improved due to technological innovations in military hardware. To defend against new and developing threats, integrated video surveillance systems can be used, which has benefits, including remote operations, real-time tasking, and reprogramming.

Electronic warfare systems that are integrated also make it possible to communicate with various other EW systems, improving the coordination of operations. Electronic warfare systems can be connected with sensors and avionics without requiring any technical adjustments. This lowers the cost of system integration and guarantees quick system deployment across numerous platforms.

What Could Hamper Electronic Warfare System Sales to Some Extent?

The amount of power available and the variety of terrain they operate in limit the ability of electronic warfare jammers and sensors, which can occasionally interfere with friendly communication. Market expansion is constrained by the high upfront costs associated with upgrading digital electronic warfare systems.

What Should Aspiring Market Players Focus On?

New market players are focusing on the introduction of advanced products. New entrants form alliances to diversify their product lines and establish a strong presence in the global market. New companies are making significant investments in the advancement of electronic warfare technologies.

Which Region Should Electronic Warfare System Manufacturers Invest In?

“Rising Use of Cognitive Electronic Warfare Systems in the U.S.”

Increased technological advancements in electronic countermeasure systems and a rise in defense spending are anticipated to boost market revenue growth.

How is China Contributing to the Sales of Electronic Warfare Systems?

The electronic warfare systems market in China is expected to rise at a CAGR of 7% over the forecast period.

Market expansion in China is being driven by increasing efforts by the military to enhance its current electronic warfare communications & intelligence-gathering capabilities and the rising adoption of tactical electronic warfare systems.

Why is Electronic Support Expected to Gain Immense Popularity in This Space?

Electronic support entails tasks, including recognizing, locating, searching, and separating friendly and harmful electromagnetic waves. To identify threats, pinpointing the source of electromagnetic radiation is essential. In tactical settings, it is also applied to obtaining intelligence.

Recently, the usage of military robots such as unmanned aerial vehicles and unmanned marine vehicles has grown. Global demand for electronic warfare support systems has been greatly fueled by the rising number of internal and external conflicts.

The system generates a contextual image displaying active actions based on the signals it has received. The system also allows for additional signal analysis. Better electronic assistance is required due to the increasing number of unmanned systems, as autonomous and remotely operated vehicles primarily rely on electronic communications and systems.

As a result, investments in ground-based radar EW systems that offer electronic assistance for carrying out intelligence, surveillance, and reconnaissance missions are also rising, which is projected to fuel the segment expansion over the coming years.

Which Platform is Likely to Contribute the Most to Market Expansion?

The electronic warfare systems market is segmented into space-based EW, naval-based EW, ground-based EW, and airborne-based EW based on platform.

The airborne-based EW segment is anticipated to experience rapid growth over the coming years. Electronic warfare equipment is starting to move from surface platforms to airborne platforms, especially for electronic support tasks such as detection and surveillance, as a result of better electromagnetic interference control.

The advantages of EW equipment have led to an increase in its use on drones. Despite their limitations in size and power production, airborne devices have the advantages of range and reach.

Major market participants are concentrating on the development of novel products because the needs of armed forces throughout the world are changing. Key companies in the electronic warfare systems market are using a variety of tactics, engaging in mergers and acquisitions, strategic agreements, and contracts, as well as designing, testing, and implementing more efficient electronic warfare technology.

What is the current value of the market for electronic warfare systems?

What are the drivers for the electronic warfare systems market?

What is the expected growth rate for the market for electronic warfare systems?

What is the forecasted size for the market for 2027?

Which are the key companies in the electronic warfare systems market?