Over the past half-decade (2016-2020), the projector lamps industry has displayed a low growth rate of 0.4% CAGR. COVID-19 massively disrupted the supply chain of projector lamps as the education sector and entertainment industry were muted.

However, presumed expansion in the construction industry and rising infrastructural development across the globe will supplement the growth curve over the evaluation period. Global projector lamp demand is expected to cultivate by more than 8% CAGR and surpass a market valuation of 4.5 Bn by the end of 2031.

Innovation in technology of light source for projectors including HID (high intensity discharge) LEDs, lasers, and hybrid will lead to amplified colour projection quality and longer lifespan. Increase in lifespan of projector lamps will significantly supress the maintenance cost of projectors.

Top projector lamps companies are working to create and innovate technologies that reduces the operational and installation cost while using a projector lamp. Market leaders have invested in addressing market demands by creating laser or hybrid technologies that split single wavelength into different color reducing the heating effect which in turn protect the environment.

What are the Technological Advancements in Projector Lamps and How Will They Benefit Consumers?

Advancements in electronics and eco-friendly products have shown an opportunistic forefront for top manufacturers of static projector lamps. This has helped manufacturers diversify their product portfolio with hybrid lamps that can reduce the overall cost of the product. Enhancement in technology from LCDs to DLPs has increased the overall market value.

Projector lamps have seen gradual advancements in light source technology, primary objective of each development in projector lamps is to enhance the experience of customers. Recently, few years back a new technology has been introduced called laser light source (light amplification by stimulated emission of radiation), this technology is been offered by numerous manufacturers of projector lamps.

Gradually growing technological advancements in projector lamps re likely to increase demand in the near future. Prominent manufacturers offering projector lamps are intensively deploying their resources towards research & development of new products. 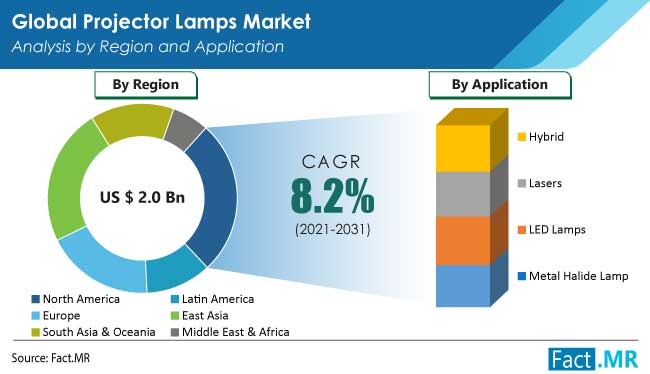 What are the Prominent Headwinds of the Projector Lamps Industry?

Geopolitical instability in two of the prominent economies - the United States and China - may cause economic panic in both countries and lead to trade flow diversions to other dominating countries. As most top manufacturers of projector lamps in China, Japan, Taiwan, and South Korea have established bases, due to this trade war, demand from the United States is likely to be significantly affected.

Due to geopolitical instability, investments made by manufacturers could be volatile over a period of time. Whereas, the investment scenario in other developing economies such as India seems to be lucrative, owing to government initiatives such as abolishment of retrospective taxes. However, global demand may witness a hindrance due to surging tariffs from both countries.

Continuous price revision has been observed in freight transportation as well as in raw materials. Increasing freight shipment cost is a combined effect of various factors including few dockworkers, less freight ships, saturation at ports, increasing fuel prices. Whereas, prices of raw materials such as aluminum, nickel, copper, reinforced plastic & semiconductors are on the rise and growing every year gradually. Labor cost is also a major concern for manufacturers, and every year companies tend to pay more.

These factors are severe and can’t be rectified over a short period of time, hence, creating a ripple effect across the supply chain that has left a crucial impact on the sales of projector lamps.

What is the Geographical Outlook of the Projector Lamps Industry?

The global market is anticipated to see a healthy growth rate over the forecast period owing to rising technological advancements and increased government spending on environmental concerns. The market is highly fragmented due to the presence of numerous manufacturers.

The market is poised to rise at a CAGR of 8.2% during the forecast period. The evolution of LED lamps from metal halide lamps has boosted demand for projector lamps worldwide.

East Asia is scrutinized to be one of the most prominent and dominant in terms of demand as well as manufacturing capabilities. It is been observed that most tier-1 manufacturers, including Canon, Casio, Epson, Hitachi, Fujitsu, Toshiba, Sharp NEC, Sony Corporation, and many more are concentrated across East Asia, particularly in Japan and South Korea.

The market in East Asia is expected to surpass a market of US$ 1 Bn and gain more than 200 BPS points by the end of 2031.

The market in South Asia & Oceania is expected to expand at a CAGR of 7.6% accounting for more than 13% of global revenue share, including countries such as China, Japan, South Korea, India, Australia, Indonesia, Thailand, and Malaysia. Initiatives towards strengthening infrastructure and growing industrialization will aid the market growth trajectory. 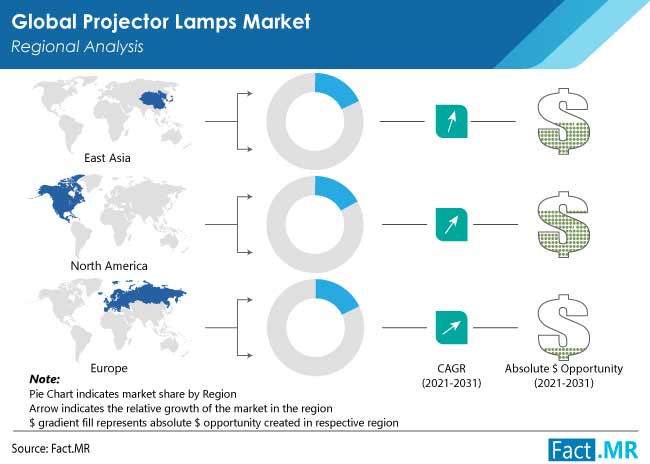 Why is Japan an Important Market for Projector Lamps?

Japan is the most promising country across the globe in terms of manufacturing capabilities for projector lamps. Most tier-1 manufacturers are established in Japan, which tends to make it a hotspot for manufacturers. Due to technological advancements and skilled workforce, the country has showcased exponential growth on a YOY basis over the past few decades.

In terms of demand, Japan accounts for roughly 6% market share in East Asia and is expected to progress at a CAGR of 7.2% over the forecast period.

What Makes the U.S. Hold a Majority Share in the Global Market?

The U.S. is one of the most developed countries across the globe with the highest GDP. The U.S. is the most mature economy and possesses established end-use verticals such as the education sector, entertainment industry, corporate sector, and many more.

Wide spectrum of end users wherein there is high demand for projector lamps in homes coupled with high per capita income are prime reasons fueling the market growth curve.

The U.S. accounts for more than 90% revenue share in the North America market and will remain in the same growth trajectory, expanding at a CAGR of around 8% across the forecast period.

Which LED Projector Light is Set to Witness High a Growth Rate?

LED projector lights are steadily gaining momentum and expected to corner more than 12% of global revenue market share by 2031. Longer lifespan, increased lumens count, and erosion of rainbow effect are primary causes behind high penetration of LED projector lamps. The ownership cost of LED lamps is comparatively lower due to less frequency of lamp replacement.

Why Do Metal Halide Bulbs Have Demand Even after Inception of Modern Technologies?

After so many drawbacks in comparison to emerging light source technologies such as LEDs and lasers, metal halide still enjoy demand owing to numerous factors. Metal halide lamps are much cheaper than other emerging technologies and the construction assembly is not much complex. Customers having usage of couple hours in a week still opt for metal halide lamps due to budget constraints.

Although, HID lamps are the most advanced technology for projector lamps for education purposes, which is expected to expand at a CAGR of more than 7.5% during 2021-2031.

Most market players that have been considered in the report are primarily leaned towards technological advancements and strengthening their sales and distribution networks.

Some of the key developments are:-

Similar key developments will be provided in full detailed report.

How much is the current worth of the projector lamps market?

The global market for projector lamps is worth more than US$ 2 Bn at present.

What is the sales forecast for projector lamps?

What was the last 5 year’s market CAGR?

What is a key trend shaping the growth of the market for projector lamps?

Demand for LED projector lamps is soaring owing to their efficiency.

What is driving demand for static projector lamps?

Growing industrialization and expanding digitalization across multitude avenues stands as the core driver for the market.

Which are the top 5 countries driving demand for dynamic projector lamps?

What is the outlook for the market in North America?

North America accounted for over 26% of global projector lamp demand in 2021.

At what percentage is sales of dynamic projector lamps going to register growth in East Asia?

Which countries are key producers of projector lamps?

Japan, South Korea, the Netherlands, and the U.S. are key producers of projector lamps.