The global home entertainment device market is projected to grow at a healthy CAGR of more than 6% during the forecast period (2019 -2029). The rise in the standard of living, the proliferation of high net worth individuals, and changes in consumer lifestyles have all contributed to a surge in demand for high quality, innovative, connected, and intelligent entertainment devices in home settings.

Home Entertainment Device Market to Gain Traction on Back of Digitization

Increased investments by consumers on entertainment products, and rising levels of disposable incomes have resulted in the development of innovations in home entertainment devices by manufacturers.

The home entertainment device market is going through a phase of significant growth owing to the rise of digitization trends in electronics, innovations in existing products, and also the gradual decline in the pricing of products associated with home entertainment devices. Such changes can be attributed to the demographic of tech savvy urban populations in emerging economies.

Video devices in home entertainment devices includes products such as streaming devices, televisions, DVRs, Blue-ray and DVD players, and projectors, among others. Video devices are projected to account for ~80% of the overall market share, growing 1.8x in the forecast period.

Audio devices in turn are expected to display a higher rate of growth, despite accounting for a substantially smaller market share. The growth in sales has been influenced by a decrease in the prices of home entertainment products. The fall and stagnation of prices has continued for years despite innovations in the field, owing to increased competition from manufacturers in regions with lower manufacturing costs.

Major players participating in the worldwide home entertainment devices market include names such as Sony Corporation, Sennheiser Electronic, Apple Inc., Bose Corporation, LG Electronics, and Samsung among others. Most companies in the field are focusing their efforts on the launch of new products and entering into collaborations to keep up with competition in the market.

The recent increase in the penetration of smart phones has made a substantial impact on the demand for home entertainment products such as gaming consoles and televisions. Mobile phones have rapidly become a highly preferred choice of video devices for customers around the world, surpassing viewership on television.

Further, the services of mobile television on phone devices has also had an adverse impact on the demand for televisions. The home entertainment device market is also facing increased competition from PC, mobile, and other platforms for gaming, as consumers are increasingly preferring these devices over conventional gaming consoles. 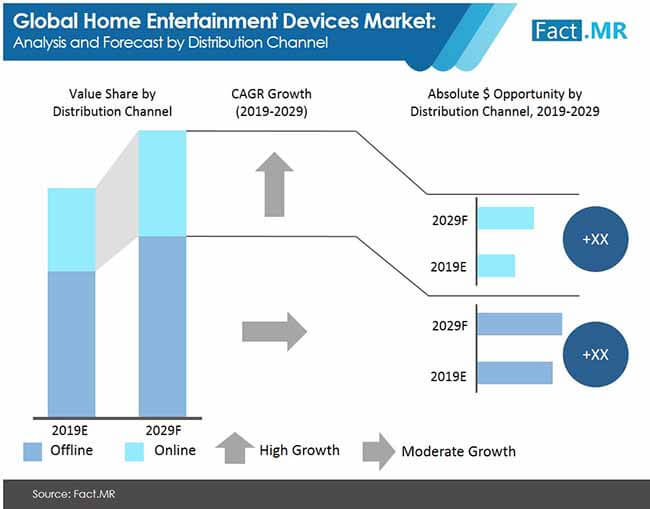 North America currently holds the largest market share for home entertainment devices accounting for 25% of the overall volume with a moderate CAGR of 4.8%.

However, emerging economies across South Asia and East Asia are growing at a much faster CAGR and are expected to cumulatively account for ~40% per cent of the global volume. The growth in the region can be largely attributed to a rise in the levels of disposable incomes, and a greater urban population of tech savvy people, particularly in china and India.

The global home entertainment devices market is segmented on the basis of devices, distribution channel and region.

This taxonomy and the detailed ToC prepared are confidential and intended exclusively for the individual or entity with whom it is being shared. Reading, disseminating, distributing, or copying this to any party other than addressee(s) is unauthorized and prohibited.

North America currently holds the largest market share for home entertainment devices accounting for 25% of the overall volume with a moderate CAGR of 4.8%.

Home Entertainment Devices Market is segmented on the basis of Devices, Distributional Channel And Region.

*147 figures and 81 tables includes by FactMR