The market has contributed to 10% of the overall drug market. However, it is anticipated to capture large proportion over the forecast period.

Most human diseases are partly associated with the dysfunction of specific proteins. Thus, growing chronic diseases such as cancer, diabetes, anemia, etc., have created a path for the production of recombinant proteins. Also, augmenting focus on healthcare provides a space for innovation in biologics and biosimilars which also supports the invention in the recombinant proteins market in the past years.

Hence, the sale of recombinant protein has observed noticeable growth during the historical period representing a compound annual growth rate of 4.3%.

Furthermore, the demand for recombinant protein will observe an upward trend during the forecast period due to rising investment in R&D, and escalating demand for protein-based regenerative and therapeutic medicines around the globe.

Apart from healthcare, recombinant proteins are also used in agriculture, food production, and bioengineering which will further increase the demand in near future.

Over the 2017-2021 historical period, the global recombinant protein market registered a CAGR of 4.3%, and according to the Fact.MR, a market research and competitive intelligence provider, the market is projected to exhibit growth at 4.6% CAGR between 2022 and 2032. 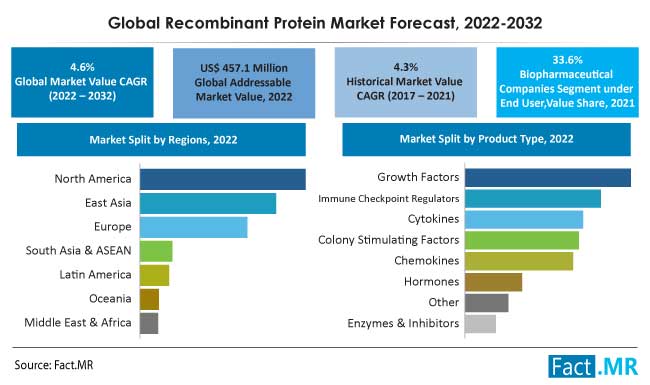 Market share analysis of recombinant protein based on product type and region is provided in a nutshell in the above image. Under the product type segment, the growth factors sub-segment dominates with 21.3% market share in 2022.

The wide growth of healthcare sector across the world supports the investment in research and development to introduce novel solutions for various diseases. The growth of recombinant proteins is directly proportional to the growth of healthcare sector and investment in biologics. Also, government funding led to amplifying the research activities in biotechnological businesses and academic institutes to bring innovations in recombinant proteins market.

The above-mentioned factors are anticipated to fuel the request for recombinant antibodies and recombinant human erythropoietin etc.

What Do Recombinant Protein Manufacturers Need to Watch Out for?

“Complexity of Protein, Its Purification and Protein Expression may Slowdown the Production”

The production of recombinant protein is a complex process owing to complex structure of a protein. For instance, the presence of GPI-anchor or transmembrane domains may mix the target proteins and plasma membranes, which reduces the yield of protein. In addition, the transmembrane is hydrophobic in nature which also disturbs the protein stability.

Additionally, aggregation and over-expression of the target protein may create unexpected physiological variations in the host cells which further results in making misfolded proteins as well as protein degradation by the enzyme protease of the host body.

The U.S. is anticipated to grow with a CAGR of 5% during the forecast period. The high growth of recombinant proteins market in U.S. is due to high spending on research and development, government support for innovations, and huge presence of key market players in that country.

Why Recombinant Protein Market Expected to Be Highly Opportunistic in Japan?

Japan is the key contributor to the growth of the recombinant protein market in the APAC region. The dominance is due to huge government support and the growing biotechnology industry in Japan. For instance, the government of Japan has financed Okinawa Health Biotechnology Research and Development Center, which offers free research amenities to capable biotechnology companies.

The manufacturers who are willing to invest in international markets, Japan, and Asian markets will provide incredible opportunities for collaborations and business developments.

Which Product Type is Most Widely Used?

The recombinant protein under the product type segment is categorized into Immune checkpoint regulators, chemokines, growth factors, cytokines, colony-stimulating factors, hormones, enzymes & inhibitors, and others. Amongst them, the recombinant growth factors sub-segment holds the largest market share of 21.3% of the global market in 2021 and is expected to witness a CAGR of 4.5% during the forecast years of 2022-2032.

Which application is estimated to support marker growth in recombinant protein market during the forecast period?

To clarify the fundamental and basic principle of an organism can be carried with the help of recombinant protein. They can be useful to locate and identify the location of protein determined by a specific gene and to reveal the role of other genes such as metabolism, replication, growth, translation, transcription, etc. Hence, due to the above-mentioned ability, recombinant proteins are widely used in cell biology, molecular biology, structural and biophysical studies, biochemistry, and several other research areas.

Key market players are focusing on products to widen the applications of recombinant proteins in various industries by investing in R&D. Investment to bring novel products into the market is the key strategy among the market leaders. Apart from this, acquisitions, partnerships, and collaborations are some in-organic growth tactics that support maintaining their position in the market.

The global recombinant protein market is anticipated to be valued at US$ 457.1 million in 2022.

Worldwide demand for recombinant protein is anticipated to reach US$ 719.5 million by 2032-end.

*108 figures and 64 tables includes by FactMR