Although the market is projected to have favourable and healthy growth, the expert analysts at Fact.MR has revealed that certain aspects prevailing in the market are likely to deter the growth of the forum in the upcoming years. The restraints identified are as follows :

Fears of parents about their children cycling on busy roads, coupled with anxiety about choosing and maintaining a bicycle, are anticipated to deter the practice and adoption of cycling. The availability of alternative transport solutions for school kids that are fast and convenient is likely to hamper the growth of the market in the forthcoming years.

Fact.MR has analyzed that there is a growing popularity of cycling-related sports activities such as BMX racing, adventure sports, and others that are significantly influencing the global sales of kids’ bicycles as the children are enthralled to participate in different events and are poised with an intrinsic enthusiasm to explore cycling endeavors.

Additionally, the cycling sports clubs are adopting some attractive promotional strategies that are positively exerting an influence on the parents that desire a healthy lifestyle for their children. This factor is expected to further accelerate the market growth for kids’ bicycles in the upcoming years. 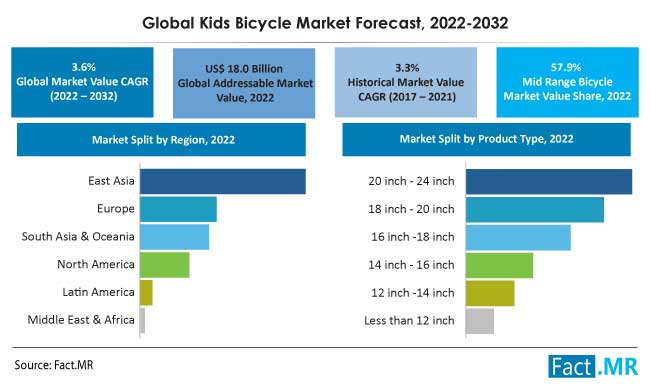 A Contrast with the Historical Market Scenario

After analyzing the market in-depth, the experts of Fact.MR has unveiled that the kids’ bicycle market has been witnessing an unprecedented surge in the past few years. There is an approximate rise of US$ 700 million surge in the total market value from 2021 to 2022.

The growth of the forum can be attributed to the advanced and compelling features that are made by the kids’ bicycle manufacturers to be in tandem with the preference and choices of the kids. The kids’ bicycles are embedded with lighted wheels and musical horns and have attached baskets in the front of the handlebars that attract the children to get interested in bicycling.

Furthermore, A popular variety of bicycles is being highly preferred by same-aged siblings and friends for kids’ bicycle races. The two-seater bicycles, wherein both are facilitated with pedals, are capturing the interest of their dedicated base of customers. The organization of various marathons and sports events are anticipated to promote the trend of cycling amongst kids, and the market is forecast to gain further prominence during the period 2022-2032.

Peek into the Domineering Segments of the Market

As per the analysis of Fact.MR, the conventional product segment by type category, is likely to hold dominant shares in the market throughout the projection period. Conventional products accounted for a market share of more than 80% in the base year. This growth of the segment can be attributed to the following factors :

Easy accessibility of these products in different price ranges offered by multiple brands to suit the customized requirements.

Environmentalists are making continuous efforts to leave a deep impression on children about conventional cycling, which is raising the market size for the products.

The battery-operated product segment is projected to witness a steady pace of growth, registering a CAGR of 3.2% during the forecast period. The growing popularity of this product is owing to the assistance of pedals as well as a rechargeable battery backup in the same product. These features are promoting the utility of kids’ bicycles further.

The analysts at Fact.MR has shed some light on the fact that the 20 to 24-inch kids’ bicycles segment is expected to remain the most sought-after in the global market, with the age group 9 to 12 years registering an impressive rate of propulsion. This age group is likely to account for nearly 1/3rd of the market share through 2032.

Fact.MR has analyzed that the offline channel accounted for the largest market share of 85% in the base year. The factors responsible for the robust propulsion of this segment are as follows :

Glance upon the Market-o-nomics Across Diverse Regions

The European region is anticipated to hold the largest market share through the estimated study period. This region is currently accountable for a 25.0% share of global revenue. The surge in the market size for kids’ bicycles in Europe can be attributed to the following :

The North American region is expected to register an average-paced CAGR of 3.98% during the forecast period. The kids’ bicycle market in North America is witnessing substantial growth, and the factors contributing to the advancement of the forum are identified as the following :

The new entrants in the kids’ bicycle market are leveraging advancements in the features to launch new products and gain a competitive advantage. These firms are continually investing in research and development activities to keep themselves in tandem with the changing consumer preferences and demands from conscious parents. Efforts are being made to strengthen their foothold in the forum and aid the further progression of the kids’ bicycle market.

Toysrus is relaunching its exclusive set of kids’ bicycles in the year 2022. This brand is entirely dedicated to kids and offers small and simple to big and complex toys for children of all ages. They are customizing bicycles with different superheroes and Disney princess characters to gain the attention of the kids and boost sales.

AlphaVector is a bootstrapped start-up backed by Savana Capital and Fireside Ventures selling a range of bicycles that also include kids’ bicycles under the Frog brand and are anticipated to gain robust momentum in sales over the forecast period due to their lovable problem – Too much demand!

Attempts of Key Market Players to Revolutionize the Market Outlook

The market is driven by ceaseless item redesigns and the incorporation of provisions like brilliant shadings and themed-after superheroes, which are drawing kids from one side of the planet to the other. The nature of this market is highly competitive on account of the presence of multiple players. The key objective of players is to launch attractive features in their products to attract a large customer base, thereby maintaining their position in the overall market competition.

The kids’ bicycle suppliers are rigorously investing in research and development activities to incorporate bicycles with advanced and viable features. They are entering into strategic partnerships and collaborations with other prominent players in the market.

Decathlon, a French sporting goods retailer, has evolved as a major distributor of bicycles for kids in more than 49 countries.

Ancell Group, a Netherlands-based manufacturer of bikes, parts, and accessories, diversified its portfolio with the launch of Winora, ghost, Koga, Raleigh, Sparta, and more. In the base year, the company sold approximately 856 thousand bicycles and dealt with more than 80 countries at the moment.

The European region is anticipated to lead the kids’ bicycle market during the forecast period.

The sports sector is the key driver in the kids’ bicycle market.