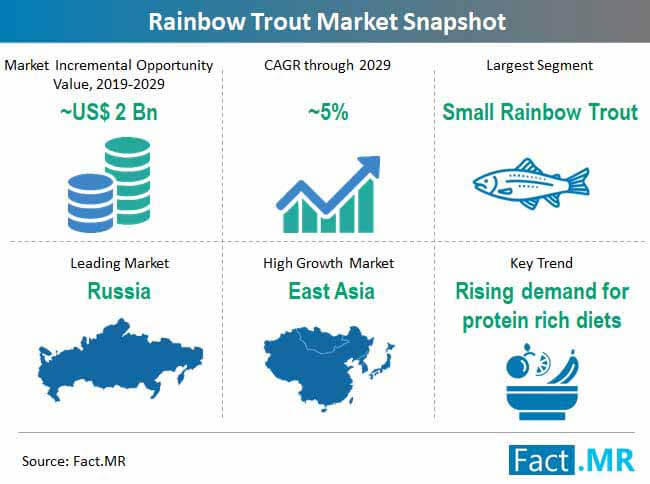 According to the latest Fact.MR study, the competition landscape of rainbow trout market is characterized by a large number of small-scale companies, which collectively hold 3/5th shares in the global market revenues.

Market forerunners, such as Cermaq Group AS, Clear Springs Foods, Grieg Seafood ASA, Lerøy Seafood Gropup ASA, and Mowi ASA are emphasizing strategic M&A and expansions. Diversification of the current offerings will be a key differentiating strategy of participants in the rainbow trout market. In an effort to explore multiple facets of the value chain, an increasing number of players are opting for indirect distribution channels to improve sales. 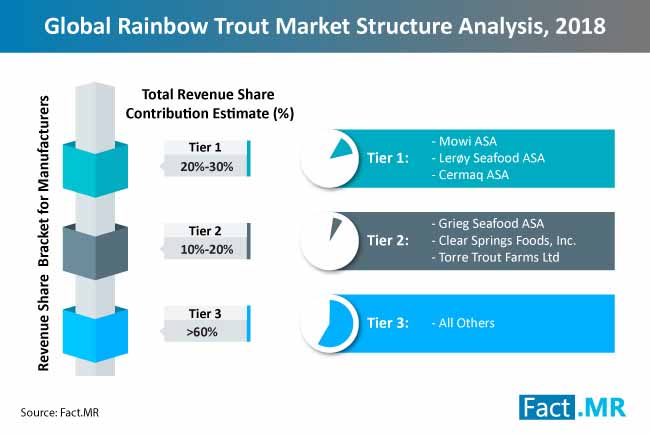 While strategic collaborations/partnerships and joint ventures with local players are likely to remain the primary developmental strategies of leading players, in high-demand regions, a large number of companies dealing in rainbow trout are investing efforts in tapping fish imports of key countries of specific regional markets.

Rainbow trout market players are also considering it imperative to establish aquaculture sites in high-demand regions, which is eventually expected to underpin gains, through steady supply of rainbow trout to the seafood processing sector.

Heavy investments in improving fish farming infrastructure and growing focus on revisiting the alignment of core competencies with different regional regulations, are collectively complementing the growth of rainbow trout market.

Companies, such as Grieg Seafood ASA are well equipped with the latest digital innovations that are capable of tracking the growth of rainbow trout to help companies arrive at well informed decision regarding farming of rainbow trout. 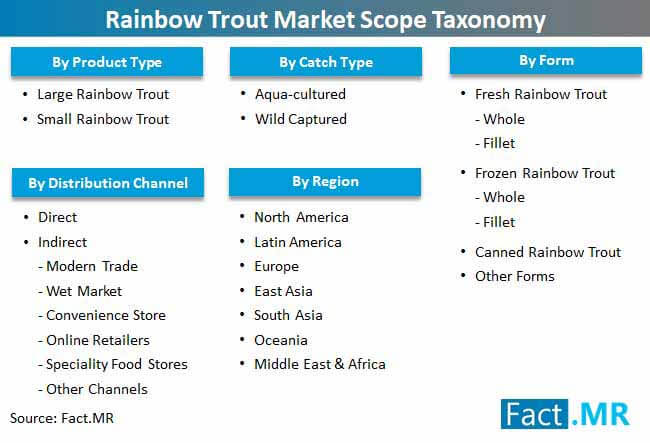 There has been a significant surge in the use of indirect distribution channels, such as modern trade, wet market, and speciality food stores, in recent years, which is enhancing the reach of rainbow trout. While this has been a key booster to sales of rainbow trout, indirect sales channels will remain a major contributor. Growing penetration of the indirect channels of distribution as a source of increasing product reach while eliminating distance barriers is creating lucrative growth opportunities for stakeholders.

In the backdrop of a recently released proposal that made it justifiable for China’s fishery sector operators to label rainbow trout as salmon, the rainbow trout sales saw a significant plunge owing to a strong disagreement of Chinese consumers.

As a result of the plummeting sales of rainbow trout in the country, it was observed that the prices are witnessing a whopping 30-60% fall. Several online sellers are also shuttering their stores, in line with this declining rainbow trout sales scenario.

However, on the other hand, companies may also tap the potential opportunities in rainbow trout sales as a cheaper alternative to the traditionally expensive salmon variants.

Rainbow Trout Market is Expected to Grow at 5% CAGR

*166 figures and 79 tables includes by FactMR