Demand for negative cut goalkeeper gloves is high, and is set to further increase at a CAGR of 3% across the forecast period of 2021 to 2031.

As per Fact.MR, a market research and competitive intelligence provider, the global market for soccer goalkeeper gloves was valued at US$ 2.7 Bn in 2020.

Soccer goalkeepers wear gloves for improving their grip and preventing themselves from any injury. Some football goalkeeper gloves have rigid plastic spines running down each finger, preventing injuries such as sprained and jammed fingers. The right pair of gloves can make the difference between a good effort and a brilliant save.

The youth population participating in soccer has been witnessing a gradual rise over the recent past. This factor has further led to demand for soccer equipment and accessories.

Goalkeeping gloves are usually made from materials such as Polyurethane (PU), leather-like materials, and various grades of latex.

The aforementioned factors might lead to positive growth and are expected to drive the global soccer goalie gloves market at a 4% CAGR across 2021 to 2031.

Soccer is one of the most widely played and watched sports around the globe. The popularity of soccer around the globe has translated into higher sales of apparel, sporting goods, and other equipment. Although the sport is played widely around the globe, it is yet to gain a massive following in China and India.

FIFA is initiating measures to boost the growth of the sport in the two most populous countries in the world, and in the recent past, the number of amateur players has witnessed a surge. Higher level of participation is likely to provide an impetus to the growth of the market during the assessment period.

Low-cost football goalkeeper gloves available in the market have led to an increase in sales. High price of these goalkeeper gloves have limited sales in the past, but many manufacturers have launched affordable range, which has led to higher levels of adoption.

Sensing the opportunity in the market, it is highly likely that manufacturers will launch a more affordable range of football gloves in the market over the next ten years.

What are the Key Challenges Soccer Goalkeeper Glove Providers Face?

A large number of players are witnessed to have adverse side-effects when their skin is exposed to latex material. Moreover, inhalation of materials such as PU and latex have been observed to cause asthma and several other breathing disorders.

These factors are impacting demand for soccer goalkeeping gloves. In addition, no evidence has proved that soccer gloves can completely prevent hand injuries such as wrist and forearm injuries.

However, this provides an opportunity for manufacturers of goalkeeper gloves and apparel to come up with innovations and developments in gloves, which would guarantee the complete safety of the hands for soccer goalies.

Which Regional Market is the Most Profitable for Soccer Goalkeeper Glove Manufacturers?

Europe remains the leading market for soccer goalkeeper gloves. Revenue in the regional market is expected to rise 1.3X by 2031.

Spectator sports are immensely popular in Europe, and soccer, usually known as football in Europe, is one of the most widely played and watched sport.

Sales of football gloves in Europe have remained steady for a long time, with sales spiking up during marquee events such as the English Premier League and UEFA.

The widespread popularity of soccer in Europe is likely to lead to sustained momentum for sporting goods sales in the region. 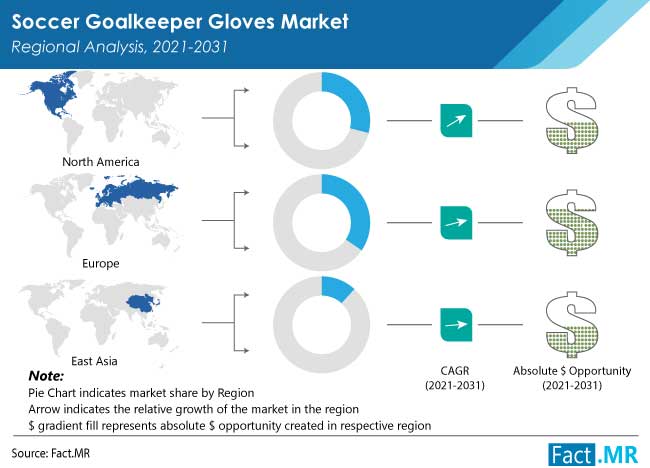 How are Soccer Goalkeeper Glove Sales in the U.S. Shaping Up?

The U.S. market for soccer goalkeeping gloves is expected to increase 1.3X by 2031.

Soccer is one of the fastest growing team sport in the U.S. The popularity of the sport in the country has been growing since the U.S. hosted the 1994 FIFA World Cup and 1999 FIFA Women’s World Cup.

Growing popularity of soccer in the U.S. is likely to provide an impetus to demand for football goalkeeper gloves over the coming years.

How Lucrative is the Market for Soccer Goalkeeper Gloves in China?

Years of economic progress in China have led to the emergence of a strong middle class that now has the means to pursue their interests. Also, increase in disposable income is fueling the growth of the China soccer goalie gloves market.

Why are Negative Cut Goalkeeper Gloves in Such High Demand?

There is no general assumption that the players of a particular region prefer a particular type of cut, it totally depends on the player’s comfort & perception.

Negative cut goalie gloves are the type of soccer goalkeeping gloves that has the fingers sewn from the inside, providing the closest fit of all glove types. This cut is suitable for goalkeepers who have slender hands or desire a glove that fits comfortably.

The palm and backhand seams are stitched within the cut, pushing the material closer to the hand and giving a notably tighter feel. The stitching on the inside of the glove should not be felt if it is properly done.

In terms of revenues, modern trade will continue to be the largest channel for soccer goalkeeper glove sales over the forecast period.

Modern trade necessitates a more planned and structured approach to logistics and distribution. Larger players in modern trade include supermarket chains, mini-markets, hypermarkets, and so on. This entails aggregating demand across a wide range of soccer goalkeeper gloves.

People prefer modern trade channels because they offer a wider selection of soccer goalkeeper gloves under one roof, saving them time and allowing them to gain a better grasp of the product.

The pandemic of COVID-19 dented demand for soccer goalkeeper gloves. Manufacturing plant closures and travel bans around the world harmed a variety of industries. As businesses were closed to limit the spread of the virus, in-store sales came to a halt.

Furthermore, the pandemic had a significant impact on consumer choices and inclination to spend on necessities. Companies have begun to market their products and they want packaging that will keep the product's quality for longer periods.

Soccer goalie gloves manufacturers are collaborating with sports teams from many countries to increase market penetration. To make goalkeeper gloves, different manufacturers employ different latex compositions that have been patented.

The global soccer goalkeeper gloves market is currently worth more than US$ 2.7 Bn.

High participation of the youth population in soccer is expected to drive demand for soccer goalkeeper gloves.

Sales of soccer goalkeeper gloves in South Korea are forecasted to top US$ 130 Mn by 2031.

With 40% share, Europe will largely contribute to the growth of soccer goalkeeper gloves market revenue.

Soccer goalkeeper glove sales in China are expected to rise at a CAGR of 5% over the forecast period of 2021 to 2031.

The U.S., China, Japan, South Korea, and Canada are expected to drive most of the demand for soccer goalkeeper gloves.

*39 figures and 148 tables includes by FactMR