Expanding at a prolific CAGR of 18.1%, the global eSports market is forecasted to attain a revenue value of US$ 9.5 billion by 2033-end, up from its current valuation of US$ 1.8 billion.

The high proliferation of technology and digital devices has resulted in the digitization of several aspects of human life in recent years, and now, this trend is projected to shape the sports industry as well. Video games have evolved into advanced immersive experiences that mimic actual sports to a certain extent, and the advent of technologies such as machine learning, virtual reality, and augmented reality has taken these games to a whole new level.

F1 eSports is a tournament that has witnessed an exponential rise in popularity in recent years and is projected to become a highly lucrative and popular eSports segment over the decade. eSports are becoming the future of the sports industry and are expected to gain further impetus as technology advances and the world becomes more digitized than ever before.

Increasing use of smart devices, growing disposable income, the rising popularity of new eSports platforms, supportive initiatives and attractive incentives associated with eSports participation and viewing, and increasing recognition of eSports personalities are other aspects that are anticipated to potentially benefit overall market evolution across the forecast period.

On the flip side, addiction and health concerns associated with eSports are expected to have an inhibiting effect on the global market evolution over the next ten years. Psychological risks associated with prolonged exposure to computer monitors and physical disorders stemming from sedentary lifestyles are also expected to hurt the popularity of eSports on a global level in the long run.

A detailed account of all new developments and current and forecasted pricing trends affecting global market growth has been listed in this latest eSports research survey by Fact.MR, a market research and competitive intelligence provider.

What Aspects are Set to Uplift Market Development in the Future?

Increasing digitization and growing penetration of the Internet have led to the increased popularity of video games, which can be ascribed to changing advertising trends. A growing number of eSports streaming platforms offering revenue generation through pay-per-view business models have resulted in increasing viewership across the world and are expected to boost demand for eSports over the coming years.

Governments across the world are trying to promote eSports as they have immense potential for commercialization and revenue generation. Several governments are launching supportive initiatives that help eSports companies and are also collaborating with many established names in the marketplace to bolster revenue generation through electronic sports. 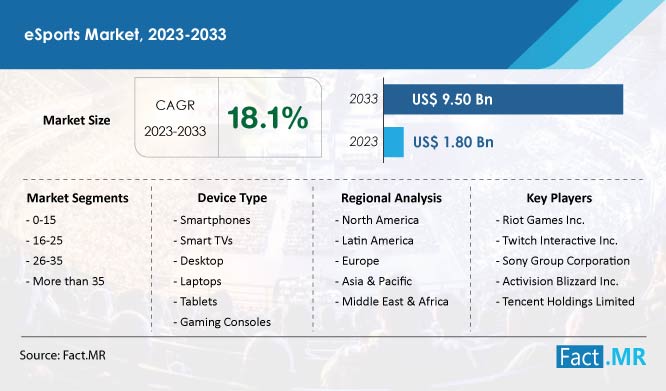 How are Start-ups Gearing Up to Satisfy Increasing Global Demand for eSports?

eSports start-ups are focusing on raising capital to compete in the highly investment-intensive marketplace and establish a strong foothold among other market players.

Which Country is a Remunerative Market for eSports in North America?

The popularity of eSports in the U.S. is rising at a rapid pace and this can be ascribed to high technological proliferation in the country and the presence of key eSports companies. High consumer spending potential, organization of new eSports tournaments, and increasing investments in research and development of new and advanced video games.

Increasing investments in the eSports industry by game developers, broadcast networks, and players are also projected to uplift market development in the country across the forecast period. Ice hockey and fantasy basketball are anticipated to witness a hike in popularity in the country over the coming years.

Efforts to develop a substantial eSports ecosystem for gamers are spawning the establishment of eSports clubs in high schools and colleges and this is also projected to boost market growth in the country throughout the forecast period. Moreover, the legalization of betting on eSports in some states of the U.S. is also expected to open up new avenues of opportunity for established as well as upcoming eSports brands.

Will Japan & Korea be Investment-worthy Markets for eSports?

The Asia Pacific region is anticipated to provide a plethora of new opportunities for eSports businesses in the future owing to rapid urbanization and digitization trends in this region. Japan, Korea, China, and India are estimated to be some of the most lucrative markets for eSports companies in this region over the next ten years.

Meanwhile, Japan is also focusing on milking the eSports industry by taking steps to promote its popularity and constructing spaces to transform the competitive gaming landscape in the country.

How Will the eSports Market Fare across Europe?

European countries are anticipated to emerge as highly opportunistic markets for eSports companies across the forecast period and this can primarily be associated with growing audience numbers for eSports. The high popularity of football, Formula 1, and other sports in European countries is also expected to create attractive growth scope for eSports organizations in this region.

Increasing per capita disposable income, incentive programs for viewers and players, and the growing popularity of fantasy sports are other prospects that could favorably boost market potential in countries such as Germany, France, and the United Kingdom through 2033. F1 eSports is highly popular in the European region and this is what prime companies are expected to capitalize on over the coming years.

Which Revenue Stream is Popular in the eSports Marketplace?

Based on revenue streams, the market for eSports is segmented into sponsorships, advertising, media rights, game publisher fees, and merchandise & tickets.

Increasing investments from media companies in the eSports industry are expected to prominently help the media rights segment to account for a dominant market share in the marketplace at present and over the coming years as well. An increasing number of viewers and growing awareness about eSports in several countries across the world are other prospects that make media rights an important revenue stream for eSports companies.

Collaborations and partnerships between eSports tournament organizers and media broadcast companies are also expected to favor growth in this segment over the next ten years.

Prime eSports companies are focusing on expanding their business potential through the opening of new venues across the world.

The global eSports market stands at a US$ 1.8 billion valuation in 2023.

Demand for eSports is projected to account for a market value of US$ 9.5 billion by 2033-end.

North America accounts for more than 35% of the global market share at present.

*170 figures and 45 tables includes by FactMR