Automotive sector has been witnessing significant growth since the past few years. Tier 1 companies account for a 40% revenue share of the overall automotive fuel injectors market. Of these,top 6 companies such as 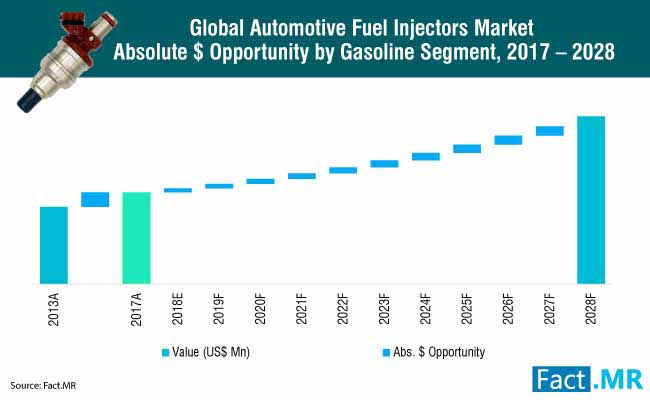 New product launches, facility expansions and strategic acquisitions in the automotive fuel injectors marketplace have been a major focus of these companies. Top 6 companies have been relying on joint ventures, especially in emerging economies in a bid to grasp new opportunities.

For instance, Federal-Mogul Corporation is largely investing in India and has entered into new joint ventures, one in China and another in Thailand, especially focusing on aftermarket for automotive fuel injectors.

These ventures are in line with the company’s growth strategy for its expansion in Asia Pacific.

Manufacturers of automotive fuel injectors, in compliance with emission norms are focused on developing advanced injectors for vehicles.

The BS-VI norm was initiated by the Petroleum Ministry of India in a bid to reduce air pollution in the country.

The prospects of automotive fuel injectors are directly linked to the growth of the automotive industry. Growth in vehicle sales can be directly associated with vehicle production, which has been on an upswing, particularly across emerging economies.

According to European Automobile Manufacturers Association (ACEA) vehicle production in China was maximum in 2017, accounting for a 30 percent share of the overall vehicle production, followed by EU that stood at 24 percent.

Moreover, increasing sales of passenger cars and commercial vehicles are expected to augur well for the growth of the automotive fuel injectors market. OICA reveals that the global vehicle production (passenger and commercial vehicles) grew by 2,325,965 (+2.36%) units in 2017 over 2016 and the rate is expected to increase in the coming years. This factor continues to remain a key influencer of growth for automotive fuel injectors market. 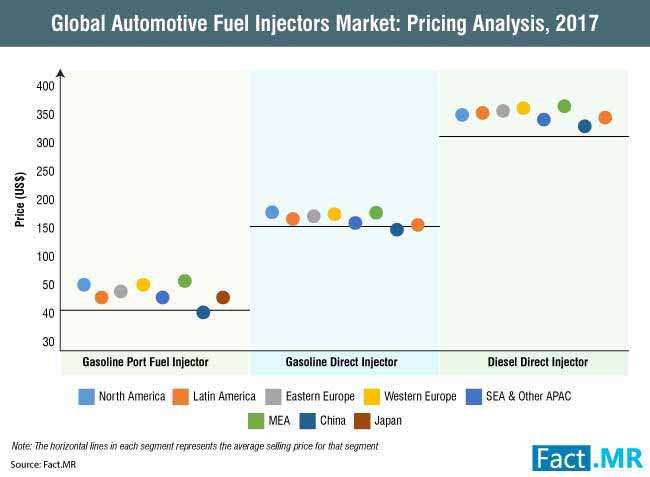 Government regulations regarding carbon dioxide emissions from vehicles in order to reduce environmental damage has translated into growing production and adoption of electric vehicles worldwide.

Sales of automotive fuel injectors are likely to face challenges with the introduction and use of BEVs (Battery Electric Vehicles) and PHEVs (Plug-in Hybrid Electric Vehicles), particularly in the developed countries.

This factor remains a key challenge for the growth of the automotive fuel injectors market.

Original equipment manufacturers in the automotive space have been focused on downsizing engines in a bid to comply with emission regulations.

This trend of engine downsizing translated into development of automotive fuel injectors that are compatible with such engines, enabling superior engine performance, higher fuel economy and reduced nitrous oxide emissions. 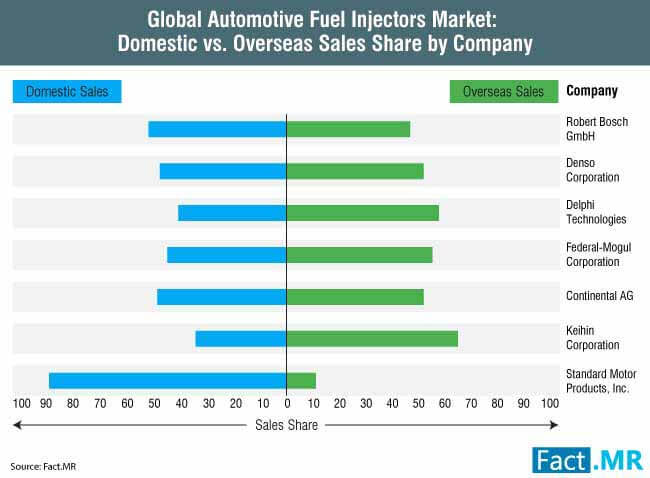 Companies in the automotive fuel injectors market are focusing on new product development in a bid to offer high precision fuel flow.

The company’s new approach toward using closed loop control in automotive fuel injectors would offer life-time precision along with simplicity.

LIFE’s grant – LIFE13 ENV/LU/000460 – offers a contribution of around 43 percent from European Commission Directorate-General Environment against a total investment of US$ 10.1 million by Delphi Technologies PLC. The research project was initiated in June 2014 and concluded in May 2018.

The new plant would be developing automotive fuel injectors for gasoline engines and fuel pumps. This expansion would further improve its ability to meet customer demand.

Various aspects impacting the growth in sales of automotive fuel injectors are covered in the report.

Apart from the above mentioned findings, the automotive fuel injectors market report also answers additional questions such as:

The data obtained from these processes is triangulated with the information gathered from external sources which facilitates higher accuracy of the researched data apropos to demand and sales of automotive fuel injectors.

Who are the key players in the Automotive Fuel Injectors Market?

Some of the key players in global market are Delphi Technologies PLC ,Hitachi Automotive Systems Ltd. ,Denso Corporation and many more.

What is the growth rate of the global Automotive Fuel Injectors Market?

Automotive Fuel Injectors Market to Expand at a Healthy CAGR of 5.6% through 2028.