Environmental concerns about food landing up in landfills have become a major issue worldwide. Therefore, manufacturers have come up with food waste recycling machines that can be installed in residential and commercial areas to recycle food waste.

Manufacturers have introduced machines that can recycle food waste and convert it into compost in less than 24 hours. This is likely to expand the market by 1.7X in the coming years.

The top 5 players in the market hold nearly ~22% of the market share and are focusing on facility expansion, new product development, and small-capacity machines commercialization especially, with the capacity of 0-50 Kg/Day and 50-100 Kg/Day.

Efforts to Cut Back on Food Waste-A Precursor to Growth

Wastage of food is reaching alarming heights. According to the United Nations Food and Agriculture Organization (FAO), more than 1.3 billion tons of food is wasted annually. Recycling massive quantities of waste are proving to be a challenging task for the government around the world.

For example, the US Department of Agriculture (USDA) and EPA following the Sustainable Development Goals (SDGs), declared in 2015, the goal of reducing food waste by half by the end of the year 2030. Even the European Parliament in 2018, as a part of the ‘Circular Economy Package’, backed a law to reduce food waste by 2030 and introduced recycling targets.

Initiatives like these are playing a vital role in triggering the global demand for food waste recycling machines by nearly 1/4th or ~25% of current demand levels.

For instance, the launch of BHTG Smart Mode food waste recycling equipment by BioHiTech Global in 2017, makes use of machine learning and cloud computing to boost equipment performance and makes the machines effective. Additionally, a product named ‘GG300s’ was launched by Oklin International, which comes with an infrared camera system, which aids to keep the operator up-to-date during the composting process.

The trend of converting food waste into fertilizer is increasingly embraced as one of the eco-friendly and effective ways of food waste recycling. This trend is attracting manufacturers to scale up the product as per the convenience of end-user.

For instance, ‘Zera food recycler’ introduced by Whirlpool converts the waste food into organic fertilizer within 24 hours. In addition to this, ‘Harvester’ launched by WISErg, is an easy-to-use and self-contained machine, which converts food waste into organic fertilizers. All the above-listed factors, is expected to boost the demand for food waste recycling machines by 2.1X during the forecast years of 2022-2032.

Which region offers the most lucrative opportunity for the Food Waste Recycling Machine Market?

North America food waste recycling market maintains its lead by contributing nearly 24.2% to the overall market share. This is attributed to the attempts to promote recycling activities taken at the country level in countries of Canada and the United States, in the wake of a huge ratio of per capita food wastage. The North American Food Waste Recycling Machine Market is projected to grow at a CAGR of 7.9% during the forecast years of 2022-2032.

What is the market scenario in Asia-Pacific?

The Asia-Pacific and European regions are the next attractive market for food waste recycling machine manufacturers. East Asia, South Asia, and Europe contributes around 19.3%, 18.5% and 21.6% to the overall market share respectively. This is attributed to the wide presence of small and unorganized players in the region in addition to sweeping concerns about efficient food waste management.

Additionally, the demand for food waste recycling machines in the Asia-Pacific region is projected to grow at a CAGR of 7.1%. This is attributed to the cost-sensitive nature of end-users in the emerging economies of India and China, along with the concern towards food waste management. 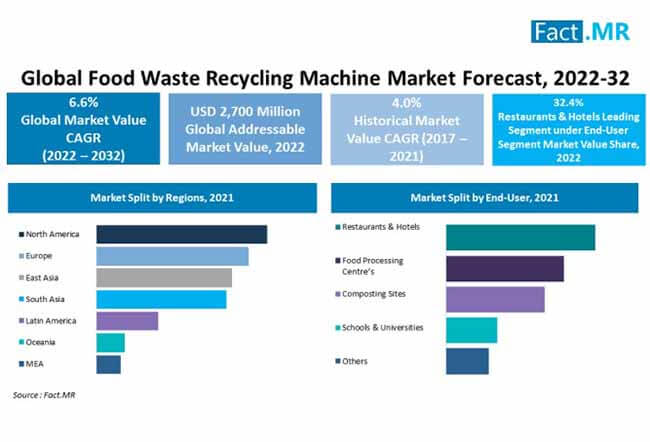 Restaurants and hotels hold 32.4% of the overall market and are expected to show a higher growth rate in the future. The shift of food waste from landfills to energy plants as a trend in waste management is offering abundant opportunities for the manufacturers of food waste recycling machines.

Which segment under capacity is expected to show higher growth in Food Waste Recycling Machine Market?

The 0-50 Kg/Day segment under capacity currently holds a major market share i.e. 21.7% of the overall food waste recycling machine market share. The segment is projected to grow at a CAGR of 5.4% during the forecast years of 2022-2032 owing to the increase in adoption of the smaller machines at restaurant chains and hotels. With the increase in the number of restaurant chains and hotels, and the growing food wastage issue, the adoption of food waste recycling machines is likely to witness an increase.

The global food waste recycling machine market is highly fragmented and competitive owing to the existence of many domestic and regional players. Various marketing strategies are adopted by key players such as mergers and acquisitions, expansions, collaborations and partnerships.

Also, new product development as a strategic approach is adopted by the leading companies to upscale their market presence among consumers. These strategies have resulted in the incorporation of advanced food waste recycling machine.

The global value of food waste recycling machine market is estimated to be worth over USD 2.7 Billion in 2022.

The demand is anticipated to surpass USD 5.2 Billion by 2032 end.