The market demand for plastic trays is witnessing an upsurge by 1.7x as it finds multiple applications in several industries such as food & beverages, pharmaceuticals, cosmetics etc. for carrying things and serving food items.

Manufacturers in plastic trays market are focusing exclusively on multiple strategies like product innovation, mergers and acquisition to garner a larger market share. They are emphasizing on developing cost-effective solutions, expanding manufacturing capabilities and facilities, along making strategic alliances with key players and leaders across regions.

Launching new and advanced products made up of different materials like PVC encompass unique features and let its producers to stand out from the crowd. Thus availability of such advanced plastic trays is poised to provide gain of 235 BPS during forecast period of 2022-2032.

Reusable plastic trays are gaining immense popularity across multiple industries as it contains low-density polypropylene and has low levels of polyethylene thermoplastic.

Better locking system, use of polyethylene in production that ensures food safety for a longer time is attracting producers in the food industry towards greater adoption of reusable plastic trays. Factors such as improved supply chain performance and enhanced safety are poised to contribute to 3/5th of market demand during the assessment period of 2022-2032.

Producers of red meat, dairy and poultry products are emphasizing using reusable plastic trays, which not only are sustainable and optimize the supply chain but also reduce operating expenses by 0.7x, is poised to support market growth.

Black plastic trays are used to package ready meals in the food industry. However, the presence of black carbon pigment in black plastic trays has made manufacturers stop using them as these cannot be recycled.

The Waste and Resources Action Programme i.e. WRAP of the U.K works to improve the recyclability of black plastics and says that the use of detectable black colorants in the plastic trays manufacturing process enables recycling of black plastic packaging.

RECOUP, a group of packaging manufacturers, trade associations and retailers, introduced new detectable pigment and advanced technology solutions to sort materials for black plastics, which is expected to trigger plastic trays market growth by 265 BPS during the forecast years of 2022-2032.

Consumers are increasingly becoming environmentally conscious and are getting involved in sustainability. They are in turn demanding greener products that have less or no damaging impact on the environment.

According to United Nations Environmental Programme (UNEP), more than 8.5 million tonnes of plastic end up in the ocean every year. Considering the negative impacts that plastic has on the environment, manufacturers are turning towards the adoption of sustainable alternatives to plastic trays.

Freezer safe and microwave-safe paper trays are also being developed along with the incorporation of advanced technologies such as modified atmosphere packaging, thermoforming etc.

Research is also underway to develop bioplastics that are not only energy-efficient to produce but is also biodegradable along with fibre-based food trays which are gaining popularity amongst consumers and end-use industries due to their biodegradable nature.

Which is the dominant region for the Plastic Trays Market?

Europe plastic trays market is dominant in the overall market. It contributes approximately 24.5% to the overall market share and is poised to continue on the same trajectory. European Union declared a new policy agenda intending to be fulfilled by 2030. It focuses on making all plastic packaging, reusable and recyclable in the EU market by the end of 2030 which is likely to place 50% more demand in the region in coming years.

What is the market scenario in the Asia-Pacific?

Asia Pacific region is becoming a manufacturing hub for electronics industries and is also witnessing high growth in end-use industries of meat & poultry, agriculture etc. which will primarily drive plastic trays in this region in coming years. 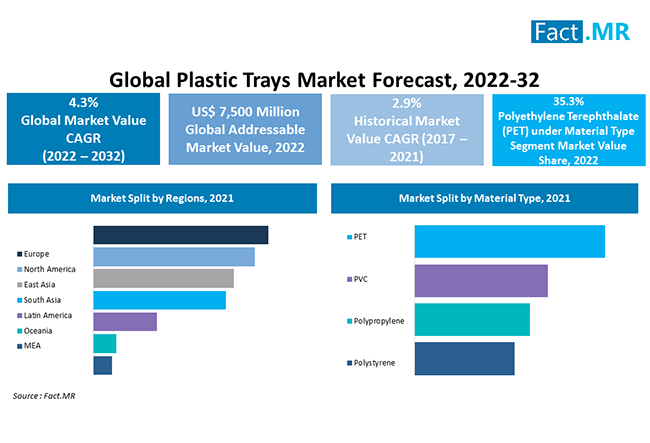 Properties of being highly recyclable, shatterproof, lightweight, cost-effective, in addition to saving energy, are leading to enhanced popularity of PET plastic trays to be used by companies, thus, placing additional demand from this segment and is likely to bring in more than 1/3rd in terms of revenue during the assessment years of 2022-2032.

Which end-use industry of Plastic Trays is projected to show maximum growth?

The global plastic trays market is highly fragmented and competitive owing to the existence of many domestic and regional players. Various marketing strategies are adopted by key players such as mergers and acquisitions, expansions, collaborations and partnerships.

Also, new product development as a strategic approach is adopted by the leading companies to upscale their market presence among consumers. These strategies have resulted in the incorporation of advanced plastic trays products.